Repair the car with a pencil sharpener

One windy day I was loading up the car with climbing gear. Suddenly the panel on the inside of the boot flew into my face. What the heck? I didn't have time to sort this out, so I stuffed it in the back, and ignored it for now.

I realised this was a delayed result for an attempt with David to make my rear window wiper work. In order to get to the little motor powering this, that panel has to come off. And the clips keeping it in place are small, grey, and easily lost. We had probably indeed lost a few, and imperfectly put the panel back. And the powerful Welsh wind had got underneath it. With spectacular results!

I figured I needed more clips. One would think that eBay would be full of them. EBay has everything, and my car is one of the most common models around. But no! Nothing! Nor could I find them elsewhere. In the end I ordered some clips for Citroen Berlingos, hoping that would do. They didn't come. I had to email the seller; they sent me another set. And when they finally came I had to conclude they were too big. Bugger!

The clips, though, are plastic. One can make plastic things smaller. I decided to try a pencil sharpener on one of them. I tried to push it into the hole after a session: it fit! And it's not much work. I did as many as I had missing original clips. Minutes later the panel was properly fastened again! A good thought; it's autumn now, and Welsh autumn can be decidedly gusty. And a panel like that can hit your face rather hard I can tell you! 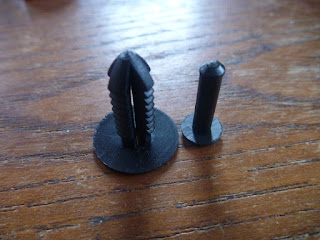 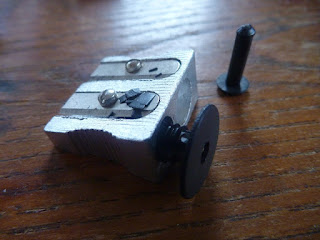 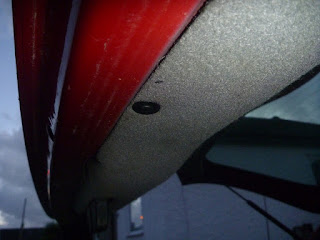