Our dig started very low-tech. We had a crowbar! And a shovel. We then got adventurous with a trowel and a bucket. Then David went allwild and bought a drill, and with the drill came the Hilti caps. But these were quickly surpassed when Miles started working with breakers and generators. We can use his stuff too! Suddenly the game changed. He quickly moved through a collapse, and is now working on the next. But his high-tech method requires infrastructure. The generator does not fit through the new passage! So a wire needed to be put through. He intended to do that, but he needed help. And I was available.

We met up at the packed car park. I changed; he never does, he just goes in in civilian outfits. And I got the luxury of being driven to the entrance! He, of course, has the key to the gate, and he has a rattly old Landrover that can negotiate the very rough road. Soon we were up, in, and down. Things go fast with only two people! The first thing he wanted to do was put a lamp up in the room where the generator lives. That involved some rather uncomfortable high drilling, but the result was delightful. The model even matched the location. Then we could move on; extend the cable from the generator to past the first collapse. It got a bit complicated as there was an awful lot of it. But soon that was sorted too! Then Miles installed another light, and started making a socket in the wall. All the mod coms! 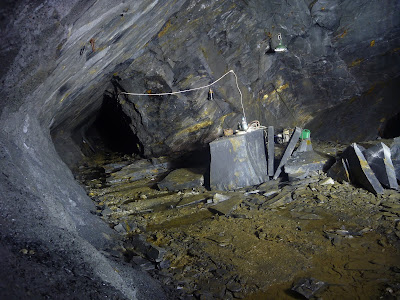 The chamber with the new light

I amused myself trying to photograph some small slates we had found there; Miles had discovered they had writing on them. They were numbers; could I find out what they meant? Were they dates? Arithmetic? If I couldn’t figure out, maybe someone else could, if I could get the writing clear in the picture. 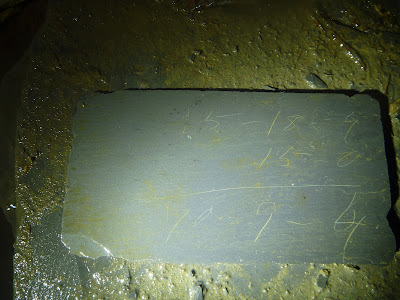 One of the slates with writing; what does it mean?

Then I decided to have a look at our own dig. That looked challenging! I’m sure next weekend we’ll be back. On the way back I took some pictures. Back where the action was, Miles was working on the socket. He figured he would just manage to finish it before he’d have to go! And he did. He then went back through the collapse to start the generator; I waited to see if the light would work. It did!
That meant we could go out. We legged it back to the entrance and then out. In a jiffy we were back at the car park, and he shot off. I decided to change, and have a surface walk to finish the day off.
The mine passage we were in isn’t pristine anymore, but the work that needs to be done to get to the part of the mine we want to get to will now be easier. And once we’re done all this can easily be taken out of the wall! It’s a mine, the walls are full of holes anyway. No idea how quick progress will be but at least we’ve made progress now… 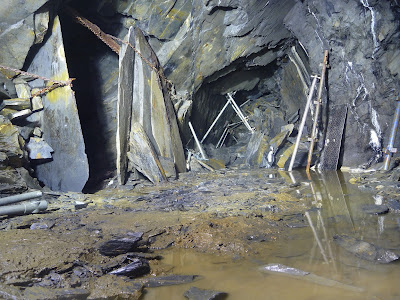 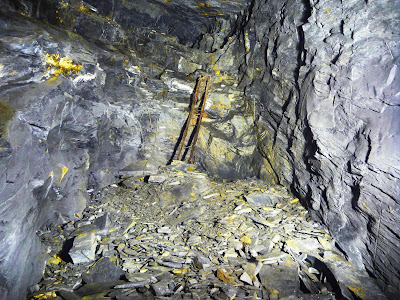 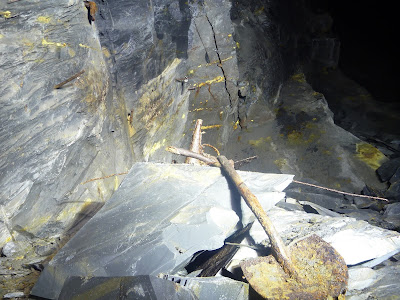 Artefacts, and cracks in the rock
Posted by Margot at 13:41