More bang in the dig

The second week in a row I was on the parking lot below Cwm, hearing a noisy engine approach. It was one of Miles' vehicles; I jumped in, got the key for the gate, jumped out, let him through, and jumped in again. Up we went! The previous time I had given him a hand installing some wiring. This time he had said the task was clearing up more of the rubble from last Thursday's detonation; what he meant was we'd blow more things up.

When we got in he told me to go ahead. I suggested I'd go and get our wrecking bar as I figured we'd need it.The previous time he'd used a drill bit for the job; not such a good idea! And so I did. We had a bit of a prod but then he decided which rocks to blow up this time. That meant: drilling holes, placing the charges, filling the holes up with filler, and connecting the wires to the detonation wire. This time I was more actively involved; I drilled one of the holes, and paid attention when he connected it all up. We then had to wait a while for the filler to dry; that time handily doubled as a tea break.

After the bang we went to see what it had done. Lots! One rock was simply not there anymore. Two had their heads blown off. And just when we were prodding things, we heard voices. Much later than expected, David appeared. And soon afterwards, so did Paul and Mick. David really loves making rocks fall down; he suggested we needed something longer than a breaker bar. I went and got some scaff and off he went. Miles loves explosives, David loves prodding loose rocks, and I love scampering around, so we were all very happy! And the dig started to look very promising! I the end I wanted to crawl in where before it had been too dangerous, but there was one rock in the way. Miles handed me the breaker and I made it smaller; then I went in. It goes a fair way! It will need some clearing. A task for next time! I'm very excited! 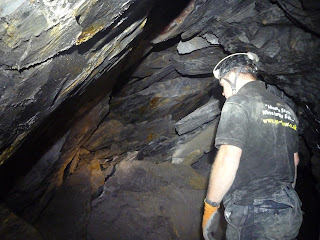 Looking at the state of things

Miles was about to head out, and I decided to go with him. The others would probably stay longer than i wanted! I had left home at 8AM and it was time to go home and make dinner. I figured Miles would need some time to tidy up so I scampered to the other dig, where Paul seemed to be making good progress. I said goodbye; we were a bit ships passing in the night! But the next Thursday would probably sort that. I was back quick enough to help Miles get his bag through the collapse (he doesn't like squeezes, and bags always make things a lot worse). Up and out we went! I hope the next trip will be there again; my hands are itching to remove some loos rubble from that narrow passage...
Posted by Margot at 09:10