Make the best of the trodden path

Sometimes we go boldly exploring where we have not gone before. Sometimes we’re just taking guests down. Not equally exciting, but a good idea too! This week Mick would bring five friends and relatives. We’d bring them down a mine that has a nice balance between challenge and boredom: three rope pitches, but all down. I had done place many times and was aware that doing it with a load of newbies could mean taking an awful long time. So in advance, I made sure I was in my most Zen state of mind. And I came up with a plan; in that place, there is a passage which has filled up to a rather high level with gravel; so much so you have to belly-crawl through the lowest bit. Not everybody likes belly-crawling, so this area of the mine receives fewer visitors than the rest of it. And is therefore less photographed! And I think it is rather pretty, so I decided I’d crawl away and do my photography thing while the rest was doing whatever it was they would do. And so it happened!

David and I went ahead to rig the first pitch. Then we sent people down. I came last. When the second pitch was rigged I was one of the first ones down; I quickly vanished to my crawl and did my thing. I also found a small climb up to some very small level above; should I do this? If something went wrong it would be a while before anyone would notice. But I decided I’m not the kind of person with the guts to climb up where I’m not sure I can confidently climb down. I was careful and did it. With success!

I took some pictures of the stoping and then wondered if I should go back. I had pterry much told the others I’d be scampering off and would see them later on. Would they be confident removing the second pitch? I know the way down via the other route, so they could, but would they be sure enough of that? If I met them at the bottom of the pitch that would save me some crawling, but I decided to go to the top. While crawling I could hear their voices; they were clearly still there.

We all went down, and then four of us went up again via the other way to see one of the mine’s sights. Then we went out. We were out at a reasonable hour! And that with five guests! Good going. When I came out I found those that had gone ahead at the campfire some strangers had built and that they had invaded. Nice idea, a campfire at the lake! But I figured we had some changing and coming home to do. And the people seemed nice, but one can’t exclude the possibility they were hospitable out of politeness and not out of desire to do so.

Some of us contemplated a dip in the lake, but overall, the pull of a shower at home was stronger. A good trip that! 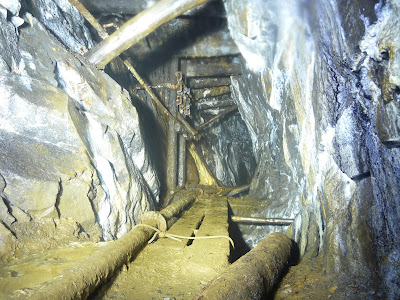 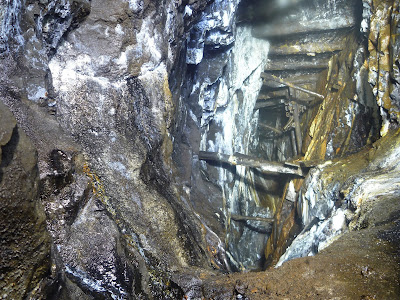