Back, again, to Parkrun


When I lived in York, I got into the habit of doing the Parkrun. There is something to say for starting the weekend with a 5km run. You get it over with, and you run faster than you would if it’s not a race, and 5km is not much but it’s more than my normal morning run. And you can then put your results in a spreadsheet! So in a way it’s strange I only ran the local Parkrun once. But we have a bunch of MSc and PhD students who race; I had raced with two of them in Caernarfon. And they mentioned the Parkrun. That brought it back to my attention. I decided to go again! And so I did. It was a beautiful morning.

We started. I set off at a pleasant pace. All went well! I happily scampered my rounds and finished rather out of breath. It’s nice to do a bit of a sprint at the end. I wasn’t quite sure what my time was, but I thought it was probably rather good. I went out again to cheer on the others (I had come in before the students). When they were all in they suggested going for a coffee. That sounded nice! We went to the café. I tend to race alone, and it’s a nice change to do something social after finishing! So we exchanged race experiences and mentioned upcoming races and it was all very nice. 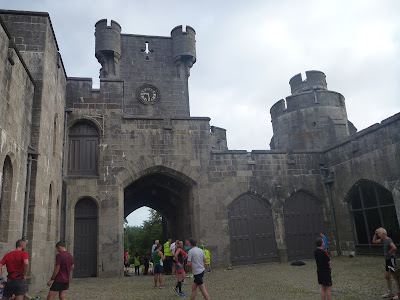 The finish at the castle gate

When I got home I found out my time was 23:46. A good time! The site said it was a personal best, but I they meant a PB on this route. I once ran 23:39 in York. But only 7 seconds slower is not bad, considering the route in York is completely flat, while the route at Penrhyn is rather undulating. And I had come in as the fourth woman! That was rather cool; 84 had run. That makes me wonder if I should try to get into the top 3 the next time. Hm! There is something about the top 3. Would I get fanatic after all? I hate running faster than I can without getting out of breath. I do it the last 100m or so, but if I could be third, maybe I would be willing to do it a bit longer… oh dear! This stuff is addictive! And well, maybe this had just been a fortuitous day with lots of fast women being engaged otherwise. Anyway! That carrot is now firmly dangling there…
Posted by Margot at 09:23