Sometimes I procrastinate like the best of them for years, and then suddenly snap into action. There is a time for everything, also picking up where you left off! The previous example was my attempt at digitizing my photo albums; I now restarted something else I had ignored since 2012.

Back then, I hard computer hardware problems; I had a laptop in a docking station, and hence a bit of a shortage of USB ports. I solved that with a powered USB hub; unfortunately, this item had the habit of blowing up everything that was plugged into it. Not very good! So I ended up with an array of memery carriers that were bust. And I carry a lot of data with me from job to job; it's not a good idea to just throw the harddisks away, as there is a chance some clever person gets their hands on the data I couldn't reach anymore. 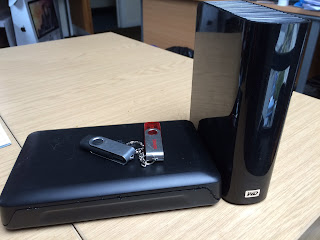 In Plymouth I didn't get around to sorting someting out with these comatose bits of hardware. Nor in  York. And I am already staring the end of my contract in the face, but only now did I get my behind in gear and lugged the by now rather dusty hard disks to the IT department of the university. This happened because of my ongoing declutter attempts. But as one says; beter late then never. I don't have to lug these useless items with me when I move house ever again!