Explore new terrain and end up in old

In March we had explored a small passage in a remote corner of a mine which I had shunned before, as I didn't trust the air quality. And we found it only smelled a bit iffy, but wasn't dangerous. We found a way up, readily rigged with a rope. Tempting! David, Andy and me went up; the others weren't feeling it. As there were people waiting for us we didn't explore all the way. I was excited; I wanted to push that place some later time! David suggested doing that in a weekend and he was right. So when a Bank Holiday Weekend presented itself I mailed around to see who was interested. And it was also the first weekend for David's drill! That was a good coincidence.

In the end, it was only David, Don and me going. Which was just as well; exploration takes an awfully long time with too many people. We went in, and made our way quickly to the pitch. In a jiffy I was up! Soon the men were too, and we could start. Neither had seen the way directly on, but that looked a bit iffy. We would focus on a side passage. We started with a passage with a flooded winze in it; this had a very iffy plank on it, and I figured we needed to find a surdier plank, or a handline, or somethiong, to cross it without going straight through the plank. Once we got there, however, I saw I could actuall just chimney across. So I did! And the men followed. That was easy. No drilling necessary. Unfortunately, beyond the winze there was only one side passage that ended with a glance into a shaft, in which we saw daylight, and an adit that got wetter and wetter until it was blocked. Oh well! Time to go back and try the other passage.

That passage we had explored the previous time; it went to a stope we wanted to drop. Nearby there was another shaft, but this one didn't have daylight in it. David installed two bolts. Before going down we first went a little bit ahead; it clealry went, but it would need more bolting to make that safe.

Before we descended we had a spot of lunch. Then we could go down! I got the honour of going first. I carefully lowered myself; this stope had ample potential for dropping things on your head. And it did! Another reason to wear a helmet.

The stope was huge and impressive. It was open, but you could see it had had a false floor a fair way down. I considered getting off the rope at that level, and try to take some pictures, but I decided against; while I would be doing that, nobody else could come down, for safety reasons (things falling on your head). I dropped to the next false floor, which was laterally continuous, and got of the rope. I made sure I was sheltered against things Don and David might bring down and took some pics. It looked quite like the mine we had started in!

David figured he knew where he was. At the level at which we had entered the mine, but just further ahead than we had gone! I had been there before but not in a long time. And a little stroll confirmed that. Funny! A new round trip. We decided to not prusik up the rope, but go around and retrieve the rope. Less risk of things falling on our heads! And so we did. Then we went back to the entrance. 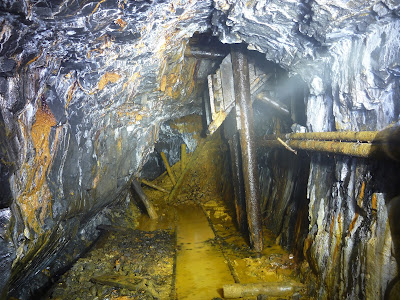 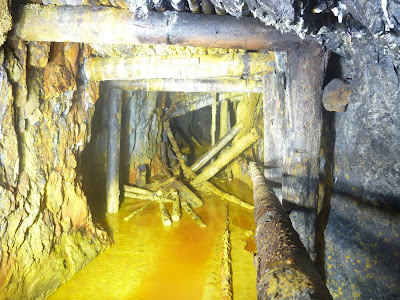 The level we ended up in

We were all very filthy by now, but this mine has a pipe gushing clean water near the entrance. I went ahead, and had cleaned almost all my kit by the time the men arrived. David had a half-hearted cleaning attempt too, but Don couldn't be asked.

On the walk back to the cars we walked past a stream; David decided to have another attempt. I just liked the idea of relaxing in a nice stream. Unfortunately, the stream was a lot less nice with a filthy, fully kitted David in it. Oh well! I went in anyway. It was warm enough for such frivolities!

On the way back David and I stopped at a nearby outdoor centre. We knew that some of the surface features of the mine were still there. Could we find that shaft in which we had seen daylight? And yes we could! That helped giving us an idea of where we had been; David had a map and with information like this it started to come together. We had a nice stroll around the extensive remains. It was a lovely day for it! And then we went home. It had been a successful day! 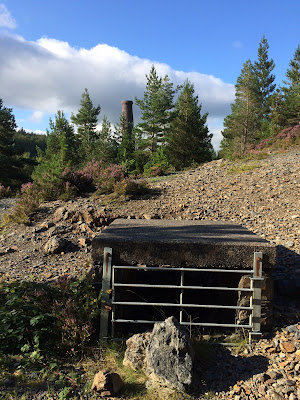 The shaft we had seen from below