I've only got two months left on my contract. Where will I be after that? I don't know. Wales? No idea! Were I to leave Wales I'd lose the need for speaking Welsh, and with it, also the ability to do so. But as I don't know where I'll be and it might be Wales, and I will at least be here for some more months, I started the last course of the series. After Wlpan, Pellach and Uwch I'm now doing the "Meistroli" course. The teacher said he thought we'd get through this course in two years. After that, we're on our own! No more courses given, at least not like this. There are courses for people who use Welsh in the workplace and who want to improve their fluency, for instance. It's not as anybody thinks that at the end of Meistroli there is absolutely nothing that can be improved on our language skills. But we should be well equipped for every day life! 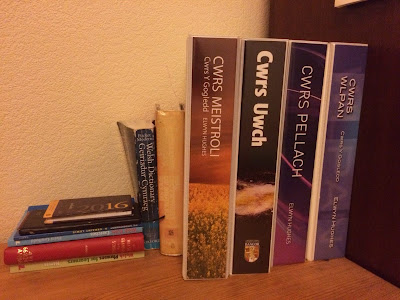