One of our PhD students would run a race. She wondered if I would too! I like races, so I registered too. Racing is extra much fun if you know people. And then Marjan suggested teaming up that weekend; we hadn't seen each other for a while. I mentioned I had the race. She then volunteered to come cheer us on! That was nice. We even drove there together, so she even cheered us on at the start! Soon we saw Megan, the PhD student, and Laura, one of our master students, and their entourage.

We ran in the opposite direction from the other time I had done it. That meant we soon came up the only hill in the route. I don't mind hills! I was going fine. The weather was good, I felt fine, all was well. I passed Megan, and then Laura. I trundled on! The kilometer markers zoomed past. 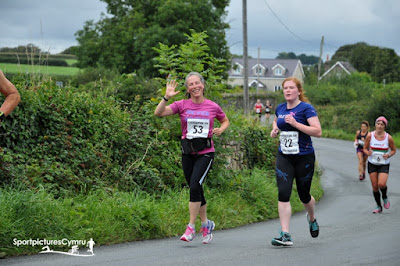 Scampering along with Laura

I had the idea my personal best on the 10 km was 0:47:50 or something. I thought I may reach that. Probably not beat it; I hadn't trained particularly much. Equal it should be possible! And when I reached the 5k marker I thought I might do just that. It was only downhill or flat from there on! I pounded on.

When I got to the finish I saw I would be coming in at something like, well, 0:47:50. (In the end it was 0:47:57.) So I thought it was just slower than my personal best. But when I got home and I looked at my race stats I saw I had completely mis-remembered. My personal best was 0:50:09. Although I had broken that record, in a way, by running the first 10k of a half marathon in 0:48:46 minutes. But that was still almost a minute slower! But where did the 47 minutes come from? I have never even ran a possibly confusing 1:47 in any race. Memory works in a strange way sometimes. But that means I beat my PB by quite some time! That's nice. 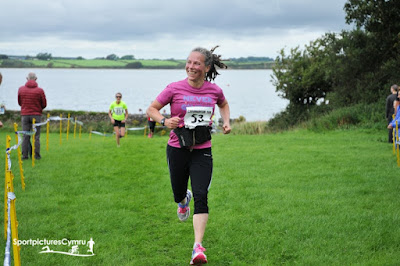 Approaching the finish. No poiints for where Marjan is.

After I had finished Marjan and I waited for the other girls. When they came in we cheered them on. But by the time the last one came in we had been standing around for a bit, so we then left. Time for a shower and some lunch! And then cooking food; we would have dinner together. Mains for her, dessert for me! I could dine looking back on a successful race!
Posted by Margot at 09:35