Back to sea level for a day

Why are we studying the last ice sheet that covered the British Isles? Because it may help us understand what the west Antarctic Ice Sheet is about to do. It looks like it is on the way out, and it might be relevant all too soon how exactly that will progress. When will it be fast, when will it be slow? Just asking its older and more northern brother how such things go might help. And it's a vanished brother, but well, we'll just do a seance, or something. This analogy isn't quite perfect.

Anyway; all we do we do for reasons of future sea level rise. So I'm still working in sea level! And I was reconstructing that for five years in my previous jobs. So when a sea level meeting was announced I was interested in going. Keep my contacts warm! Advertise our project! And it was even in Liverpool; that's next door. And it was a meeting in honour of Phil Woodworth, who was involved in one of our projects, and who is a lovely man. All reasons to go! So I threw a poster together and went.

I could only come for half the meeting, as during the second day of the two-day meeting I would have to go into the field with the students. My own session would be on the day I would miss! For that reason I had chosen a poster; you don't need to be there to present it. It'll hang there and communicate on its own. And I figured that there would be at least one co-author of it present. It's harder to do a talk if you're not actually there!

As it was in Liverpool I combined it with a visit to Hugh. He had bought a house in the meantime! I was keen to see it. And him and his girlfriend, of course. So I took the train to Liverpool and met them in town. We first went for pizza, and then we went to their home. It's very snug! But I was tired after a hectic week, and so were they, so we all retired early.

The next morning they drove me into town (luxurious!) and said goodbye. I entered the venue and immediately bumped into Mark Tamisiea, the organiser, and also a former collaborator. Let the sea level stuff begin! 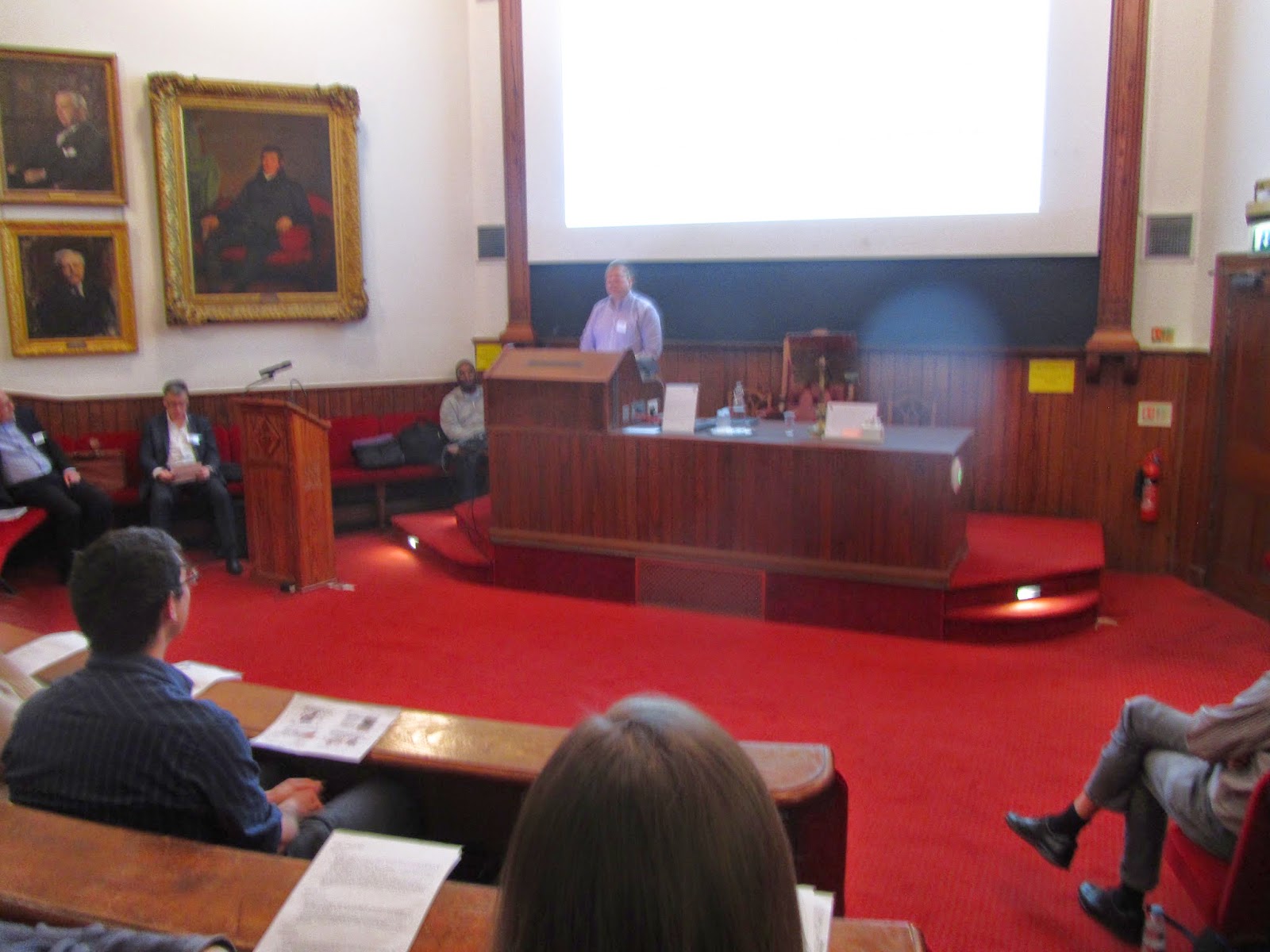 The meeting took place in a very sophisticated building 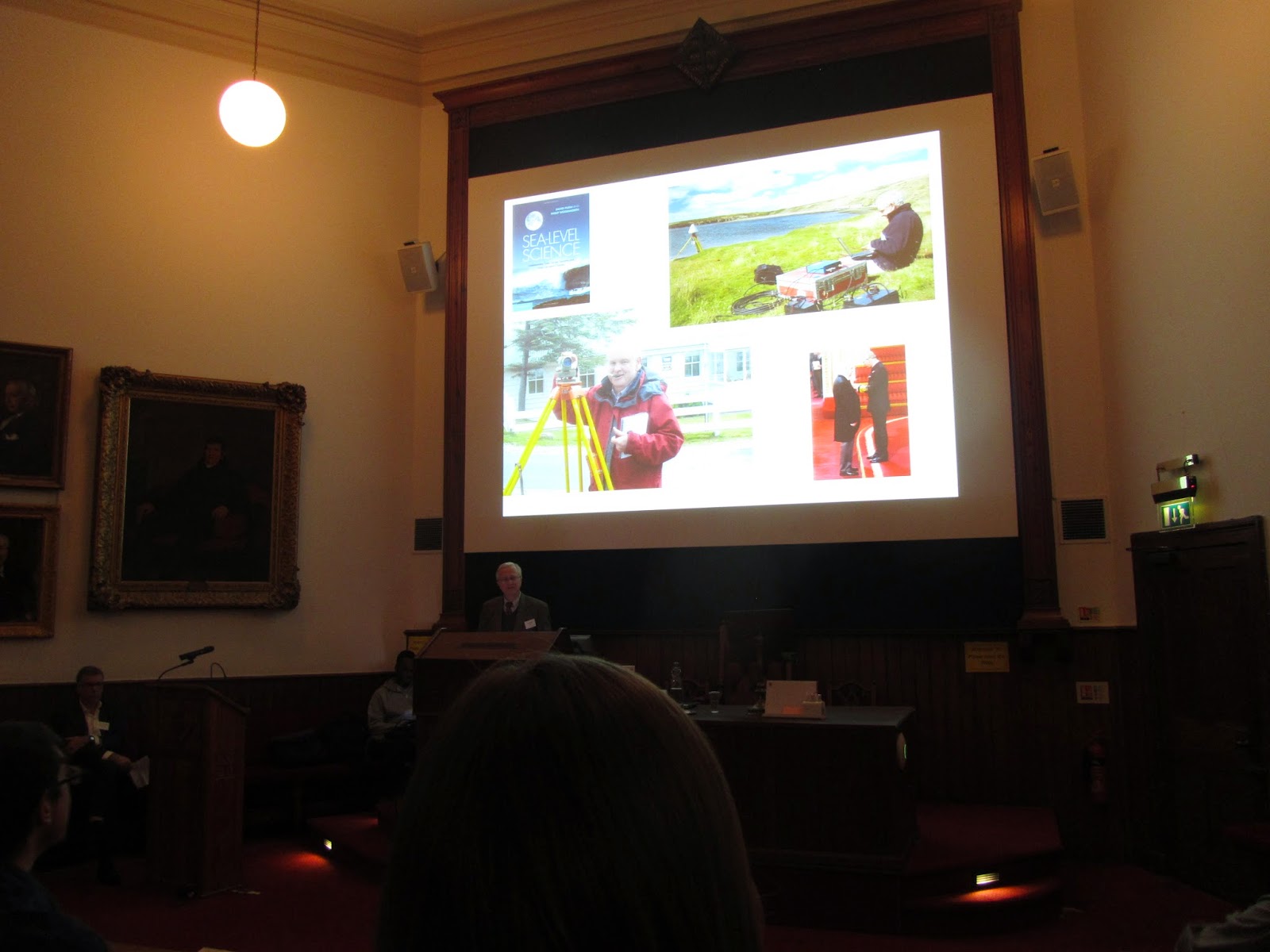 Lots of pictures of Phil!

Half of Bangor showed up, and some people from Durham, and a former Plymouth student who was now in Sheffield. Lots of acquaintances!

I could attend the sessions on late flood risk (well it was called "extremes and impacts" but flood risk was pretty much what it boiled down to), Holocene sea level change, and sea level observation. Interesting! Too bad the sessions involving ice sheets, ocean dynamics and sea level predictions would probably as interesting. It was good to be brought up to date on sea level stuff again! And the coffee breaks were good for socialising. It resulted in several things; two men who might come to Bangor for a seminar, and a potential collaboration between one of the giants of UK sea level science with a Bangorian who tends to end up spending most of his time on applied stuff. Not bad! We'll see how it all pans out, but hey, first steps are taken.

After Phil's own speech (he is retiring; we'll all miss him!) I had to go. No post-talks pint, and no conference dinner for me. Oh well! It was a bit of a hit and run, but I was glad I had gone. I'm feeling the sea again after all this ice!
Posted by Margot at 12:47