It's nice to do a race on your doorstep! So when I heard of the Anglesey half marathon, I registered. And as it would be in my own town, I figured I'd probably see people I knew either in the race, or along the route. That's always nice! When the race came closer, I found out that my running mate Coleen would be running it, and another colleague by the name of Gordy, and the new neighbour. Some of my office mates would be along the route. So maybe it would be rather social!

I got up hardly more than an hour before the start. I had collected my race number the day before. I had my normal breakfast, and biked to the office. Or rather, a bike rack near the finish. Same thing really! I figured after 20 km on asphalt I would want to get off my feet. After parking I walked to the start. There I took my warm clothes off, and dumped my bag. On the way to the bag drop I saw our technician Pete. Very nice! And then I was ready. And then looked beside me. And looked into a surprised face! It turned out to belong to a chap who had been a student on the 2012 field trip to Ireland. (For those following this link: it's the chap bowing down to look at a boulder with a sheet of paper in his hand.) That was nice! He now lived in the Lakes District. He had bagged a lovely sounding job! That was great.

The the horn went and we were off. I had ended up quite far at the front, as I had just walked from Anglesey, which was the direction we took off from. I was keen on pacing myself, as I knew I would feel better if I finished with the feeling I could do another 20km, as I would have to, in 1.5 month's time. So I ran slow enough to keep my breathing normal. Lots of people overtook me. 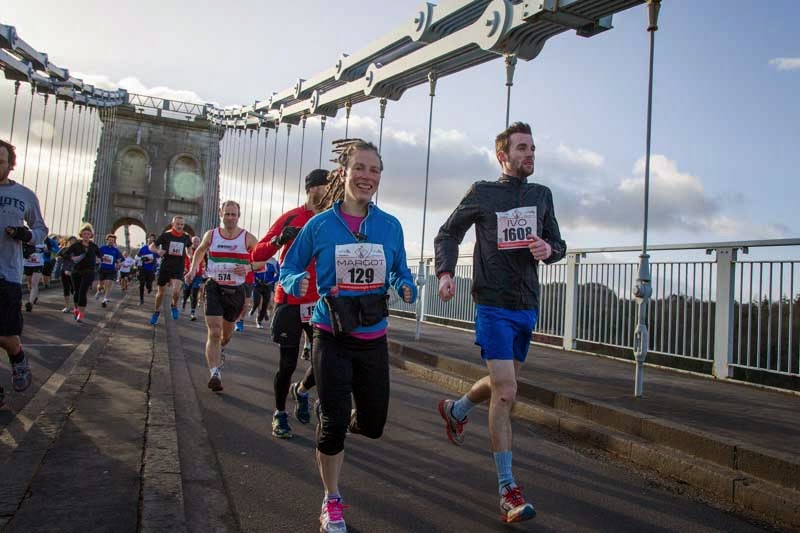 Near the start, on the beautiful bridge

Soon we ran past the office. Funny! And then onto the road to Biwmaris. I didn't know it very well, but it is a beautiful road, and the weather was great. Sunshine, blue skies! 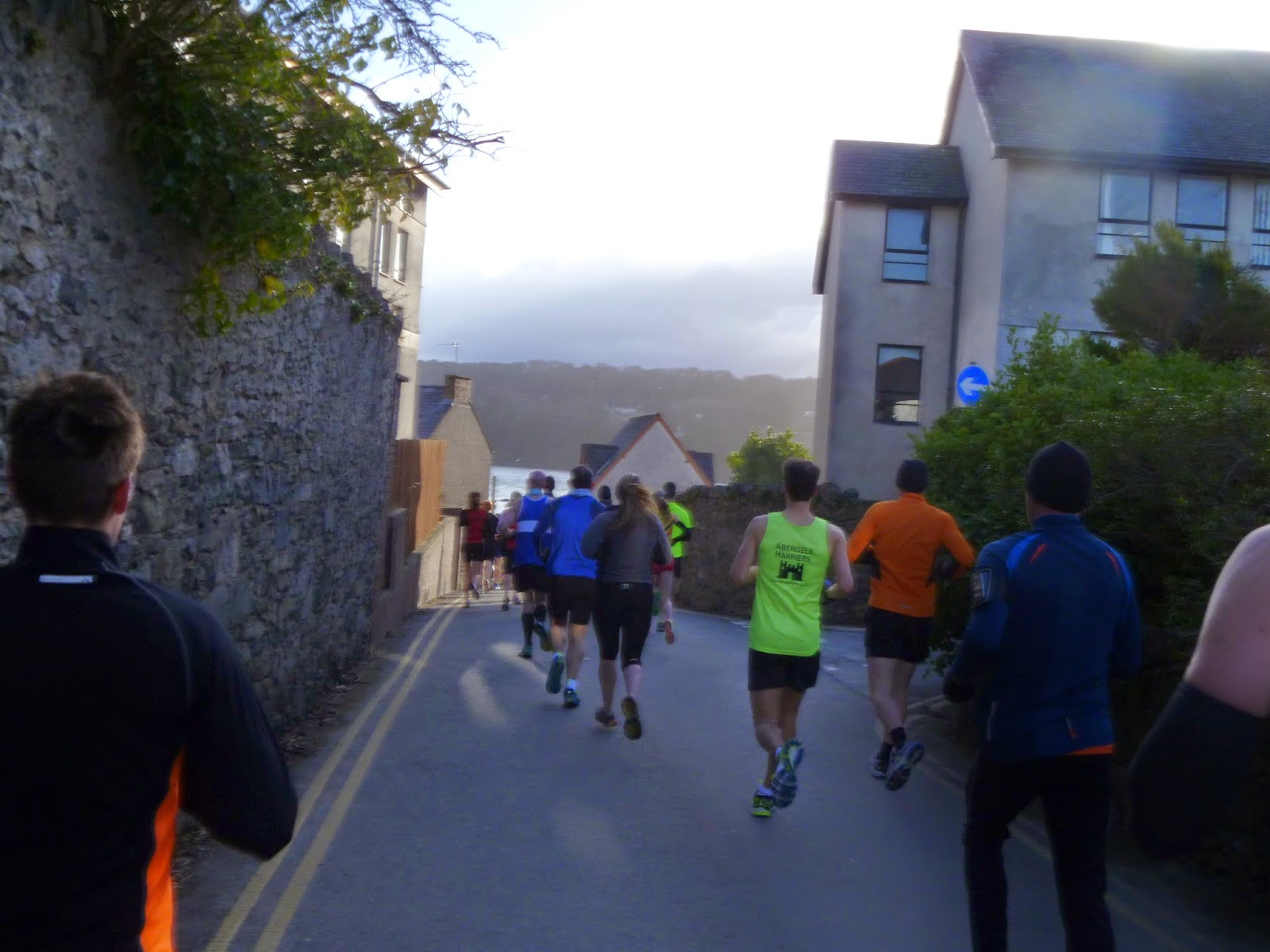 Running past the School of Ocean Science (the two nondescript buildings to the left and right; my office is in the mostly hidden one on the left)

A bit outside Menai Bridge I saw Andy, Coleen's boyfriend. But no sign of Coleen, or Gordy, or Barry, the neighbour. Oh well! I plodded on.

The mile boards kept zipping past. It went rather well, I thought! And then I hit the halfway point. All going well! I had needed less time than half my earlier half marathon times, and even though one's speed might very well decrease along the way, the second half had more downhill than th efirst half. I might well run a personal best that day! And with the worst now over, I figured I could speed up now. My body didn't agree. Oh dear. And the weather got colder. The sky became slate grey, and the wind picked up! But one goes on.

The skies cleared up later, but my speed stayed the same. I just plodded on, quite happy to have music to keep me entertained (on my snazzy new earphones!). And then Menai Bridge approached. A new personal best still seemed possible. Normally, I speed up at the second last, and last mile. Not now! My legs were tired. 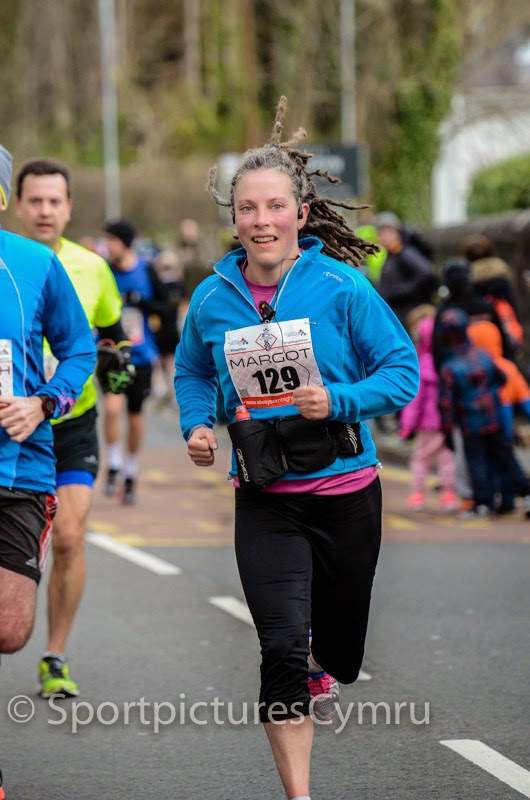 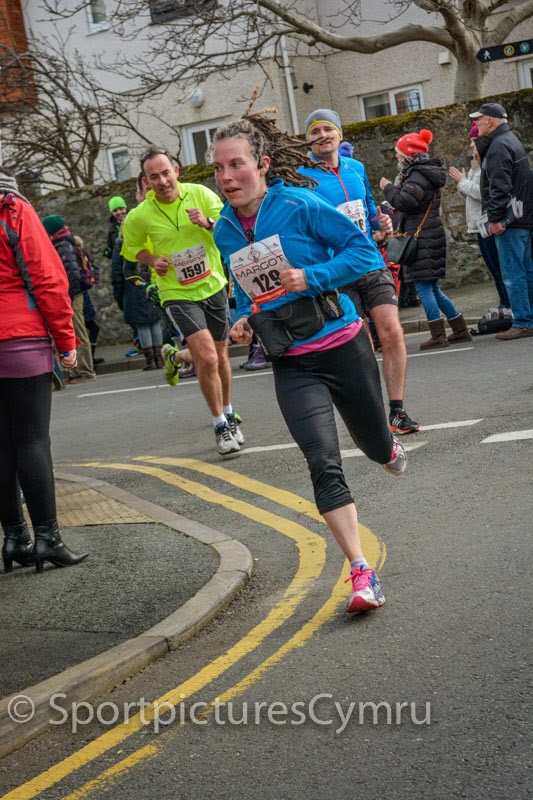 And then I could hear the finish. And soon after I saw the turn-off onto the parking lot that held the finish. That, finally, gave me renewed energy. I legged it! I was a bit surprised to feel that much energy come to me; where had it been, only a few hundred metres earlier? But well, I was enjoying myself now, and I galloped over the finish. In a PB, indeed! I came in at 1:45:57, which I later saw corresponded to a race time of 1:45:44 (I clearly had had to wait for 12 seconds to cross the start). Not bad at all! But I didn't see any office mate. Nor any other colleague. But I did see Ben again, the former Plymouth student! He had managed in only 1:33. Fast man! 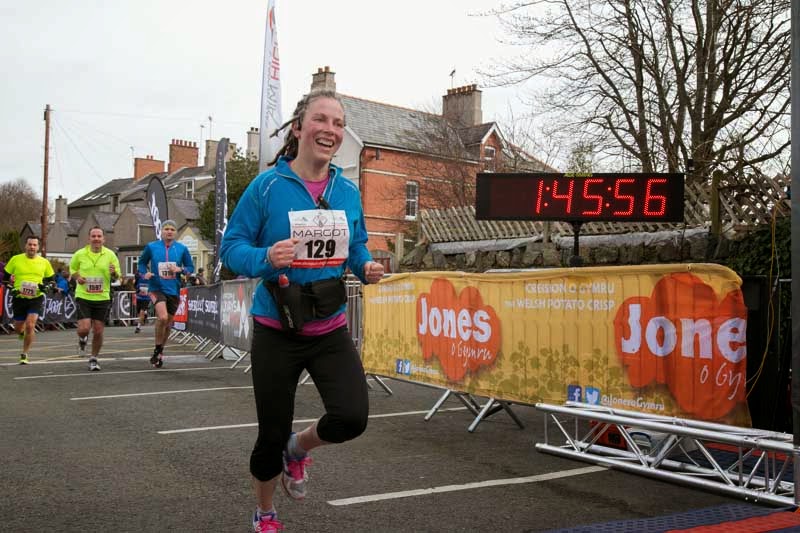 I got my bag back, and put my warm clothes back on. I hoped to see maybe Coleen, Gordy or Barry finish. But no! Nobody. When I got cold I decided to leave, and retrieved my bike.

At home, during a nice hot shower, I figured I had clearly failed to pace myself. If I would have, I probably had not felt so tired in the legs at the end. (Only now that I write this, I realise I accidentally ran a best 10k ever as well - they had a kind of sub-finish after 10K, and I got there within 49 minutes. My personal best on a 10k until then was 50:09, at the Plymouth 10K! The only Welsh 10K I had done had taken me almost 52 minutes! Blimey, I REALLY wasn't pacing myself!) But it is nice to exceed your own expectations. I was just within the fastest 10% of my category, and also of women all-round. Not bad!

But this failed pacing is a good lesson to learn before the marathon. I'll have to pace myself bigtime. I hope it'll be OK! I'm a bit nervous. But this was good training. I only have to keep it up for six more weeks! And then I can slouch and drop down to the fitness of a 10-mile runner. It still is my favourite distance, and I imagine it will stay that way even after the Manchester marathon!