After the half marathon two weeks before, I was quite done running after 21 km. If I ever wanted to do 42 km, I'd have to step up my game. The week after I'd run some less-than-21 km run, but longer ones needed to be done too. And my colleague Gordy, who had also run both the Anglesey trail race (but he'd done the full marathon) and the Anglesey half marathon, was registered for the Exmoor marathon, one week before my race. He was up for some training too! And he had a general plan to run between Welsh castles.

We made a plan. He suggested running to Conwy, which has a lovely castle, although there would be no castle on this side. I figured we might run past Penrhyn castle; it's a 19th century specimen, rather than an original medieval one, but one can't be picky. But then I suggested we run the other way around. It would be annoying to run to Conwy and then find out the next train back would be in two hours! Not unthinkable. So that became our plan.

Gordy appeared sweaty, without water and without ticket a few minutes before the train would leave. Oh dear! He had bought a new water bag, but it leaked like nothing on Earth, and he had left it at home. He just managed to buy a water bottle (and breakfast - oh dear again) before the train appeared. A ticket was purchased on board. I hope he'll be better prepared for his actual marathon...

In Conwy he sought out a public toilet and then we were off. He'd done a race here before, so he knew the way. A way, anyway. But we did end up, as planned, on the cycle route along the coast!

The route was largely very close to the A55, which wasn't ideal, but it did the job. We happily plodded on. An hour passed. And we plodded some more. Another hour passed. We were still going strong. But I was venturing into unknown territory; I'd never run further than half marathon distance. I'd been in a race for three hours before, but that was due to lots of walking with a sore knee. So after 2.5 hours I was certain we'd covered more than 21 km, and I was setting my own distance record. And it was getting hard! 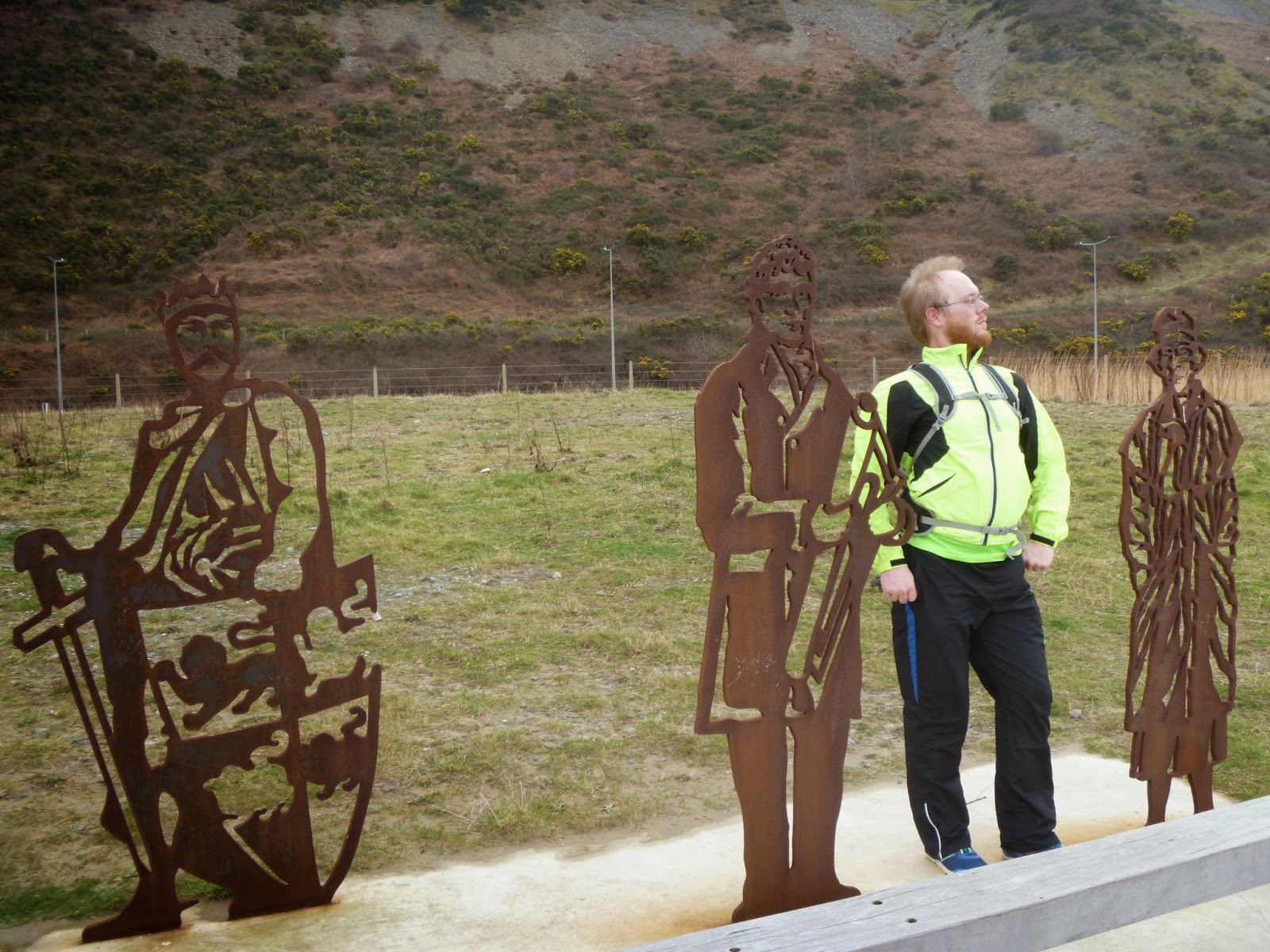 The Great of Gwynedd; Llewelyn the Great, Thomas Telford (a Scot, but who built important bridges around here), Gordy, and Margaret Williams, a Conwy journalist 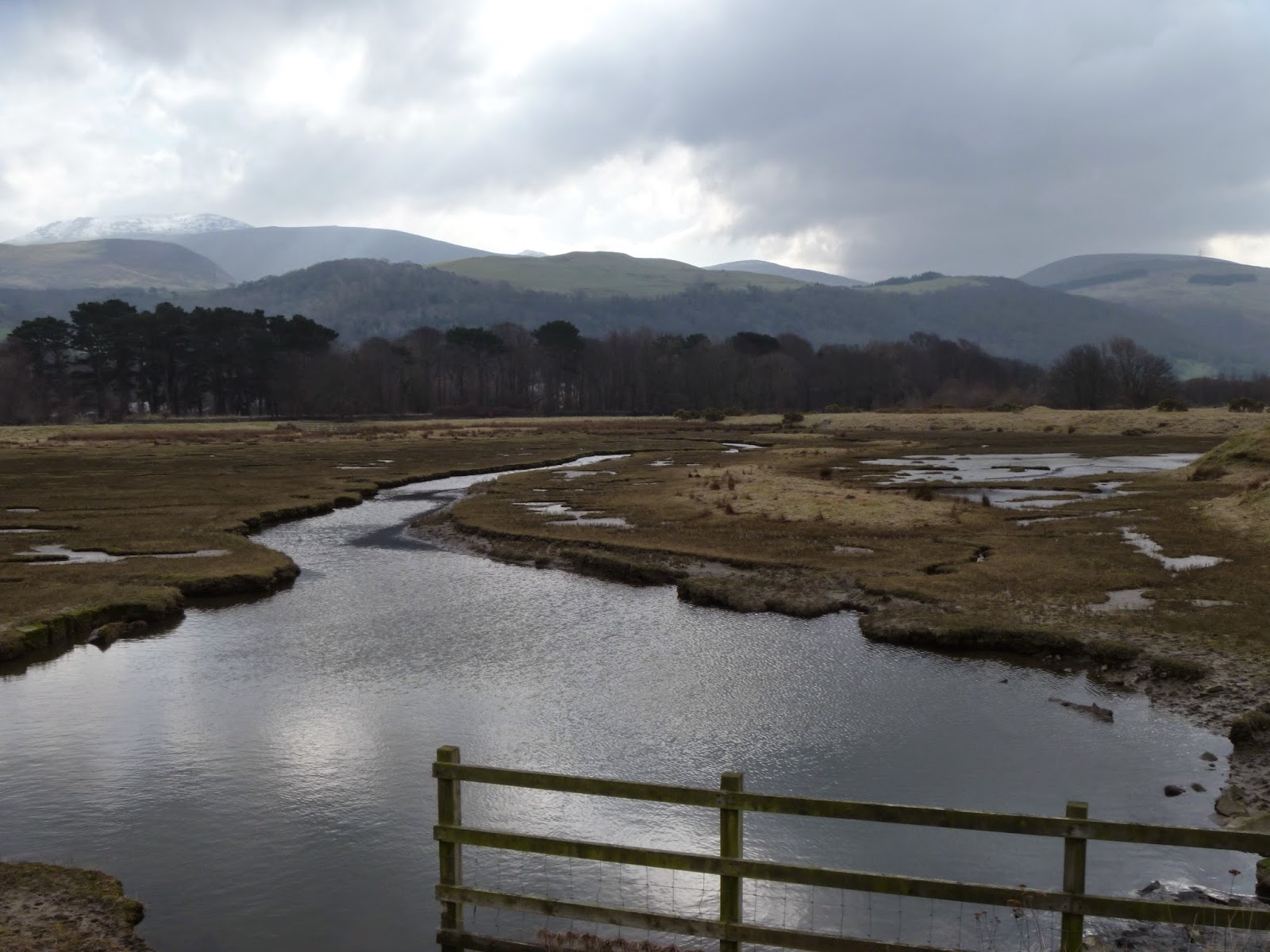 We passed a lovely saltmarsh

When we already had Penrhyn Castle in sight, my knee started playing up. I put on a knee brace. I have these for other reasons, but I was hoping they also help against this particular injury. It did feel better! We plodded on. Gordy was starting to feel the lack of water. He had only bought a small bottle on the station! And I had more, but I wasn't sure how much. We shared, but I think he was being modest.

We needed to insert more and more intervals of walking. And then knee hurt more and more. It was hard! This marathon will be difficult. But if I manage to do it, I will feel really accomplished. The race itself will have the advantage of other runners and people along the route.

In the outskirts of Bangor, Gordy suggested we don't run all the way back to the railway station where our bikes are, but to the clock tower in town. I was keen to agree! Running on reserves I staggered on. And there it was: the clock tower! I had no energy left to accelerate. But I got there. Done!

Gordy immediately went to the nearest shop that looked like it sold water. And bought two litres. And then we walked to the railway station. My legs were made of lead and I was slow. Gordy was happily scampering along! He's like that. He'll be fine on that race.

I was glad to be back on my bike. I had to buy weetabix along the way; I had run out! Oh dear. And when I got home I did my heavy race routine: make tea and sandwiches while running a bath. And then recover in the warm water. I should make sure I have sandwiches ready, and everything as prepared as I can for the big day! 42 km and then two hours in the car: that will finish me off...
Posted by Margot at 09:47