Four weeks and counting! That marathon is approaching quickly. And Gordy's is approaching even quicker. So we did another long run. After the rather traffic-heavy run the week before I was keen to run a quieter route. David recommended running to Aber Falls; it's a beautiful route, but a good path, so perfect for training. The only problem is that it is too short, but he mentioned a small road went from there too.

I sat down with a mapping website and tried a few options. I saw a road went south from the small road! It looked beautiful. And a trident of Aber Falls, road south, and small road itself would be long enough. But then I checked elevation. I ditched the path south. But there was another one! It went along a river to a small reservoir. That one wasn't too steep. Good! I had to make the route along the small road rather long to come up with a 17.5 mile route, but so be it.

I picked up Gordy in the blazing sunshine. We parked, and off we went. The path to Aber Falls was beautiful indeed! And within minutes we were both running in T-shirt. It's spring! But Gordy wasn't really feeling the run. He struggled immediately! Oh dear.

We got to the Falls. They are pretty! Nice to have seen them. We got back to the car, and set off along the road; it was an old Roman specimen. It was steep! Oh dear. But we plodded on, to the junction where we would take the path along the river. 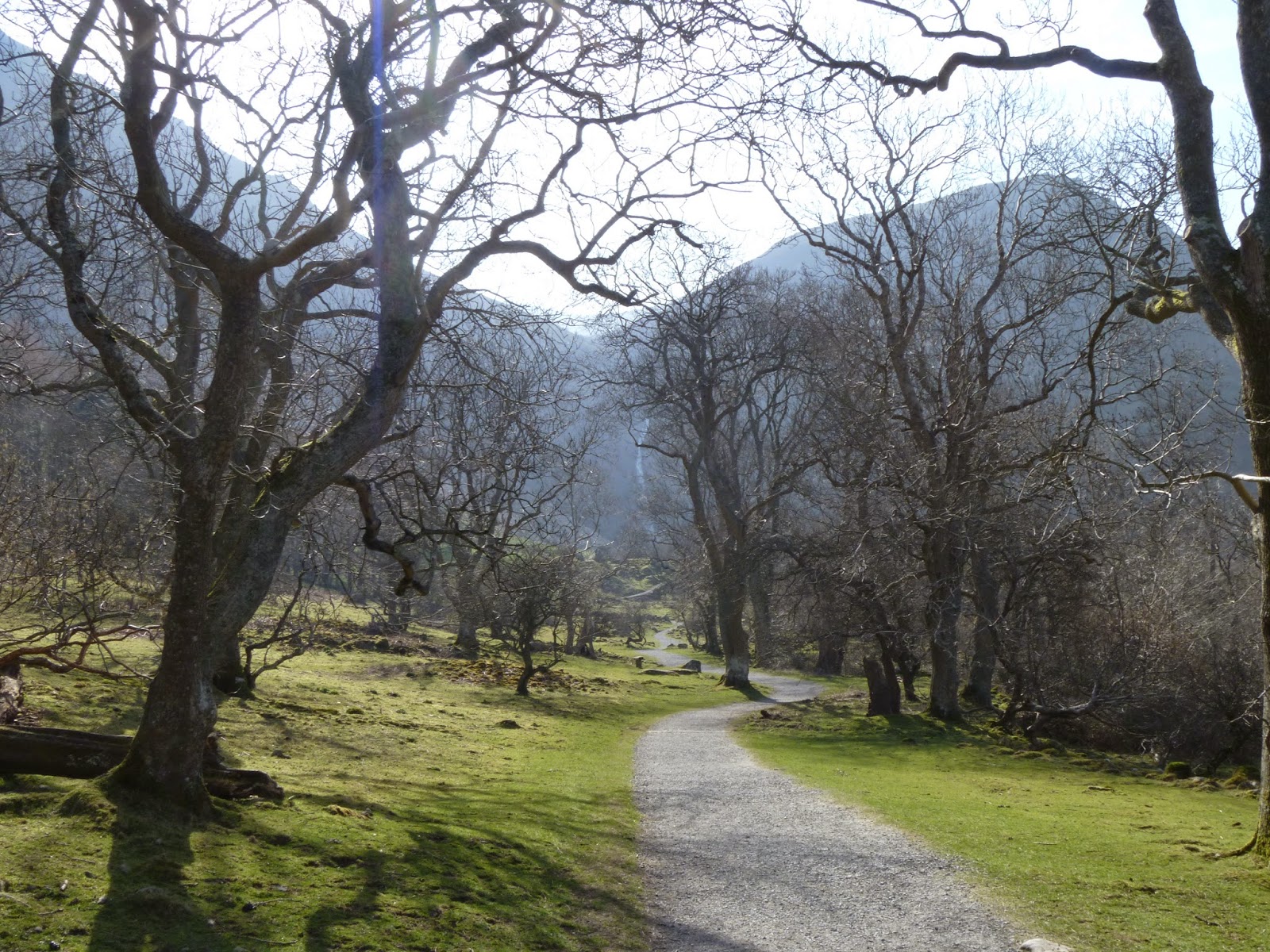 The falls in the distance 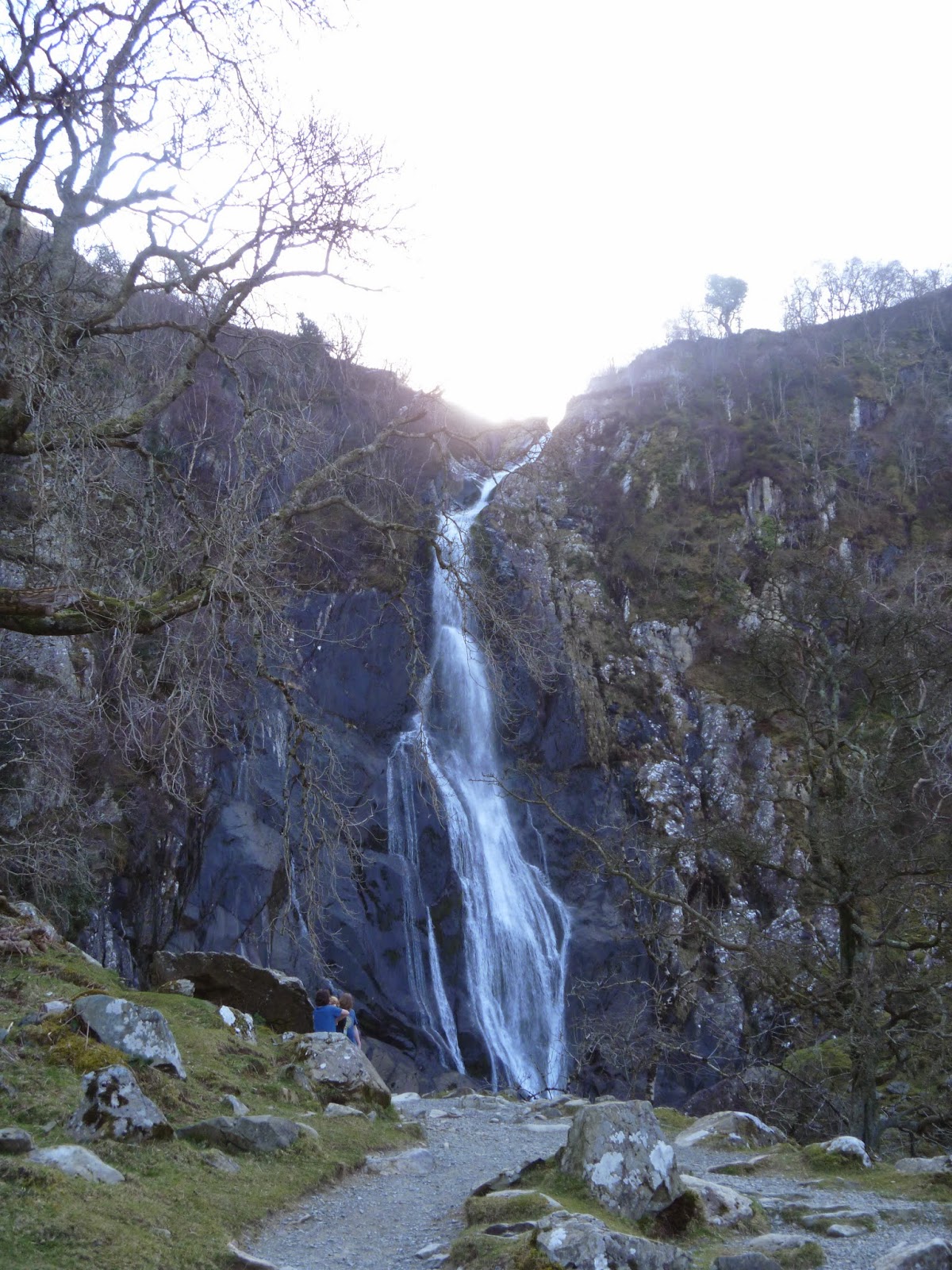 The falls from close by

What a valley! Apart from the river, there was nothing in it. A lovely one for camping one day! We plodded to the water at the end. And then things got better; now we went miles downhill. By the time we reached the road (here a path) again our bodies had properly woken up and things got easier. Time for the last tooth of the trident! 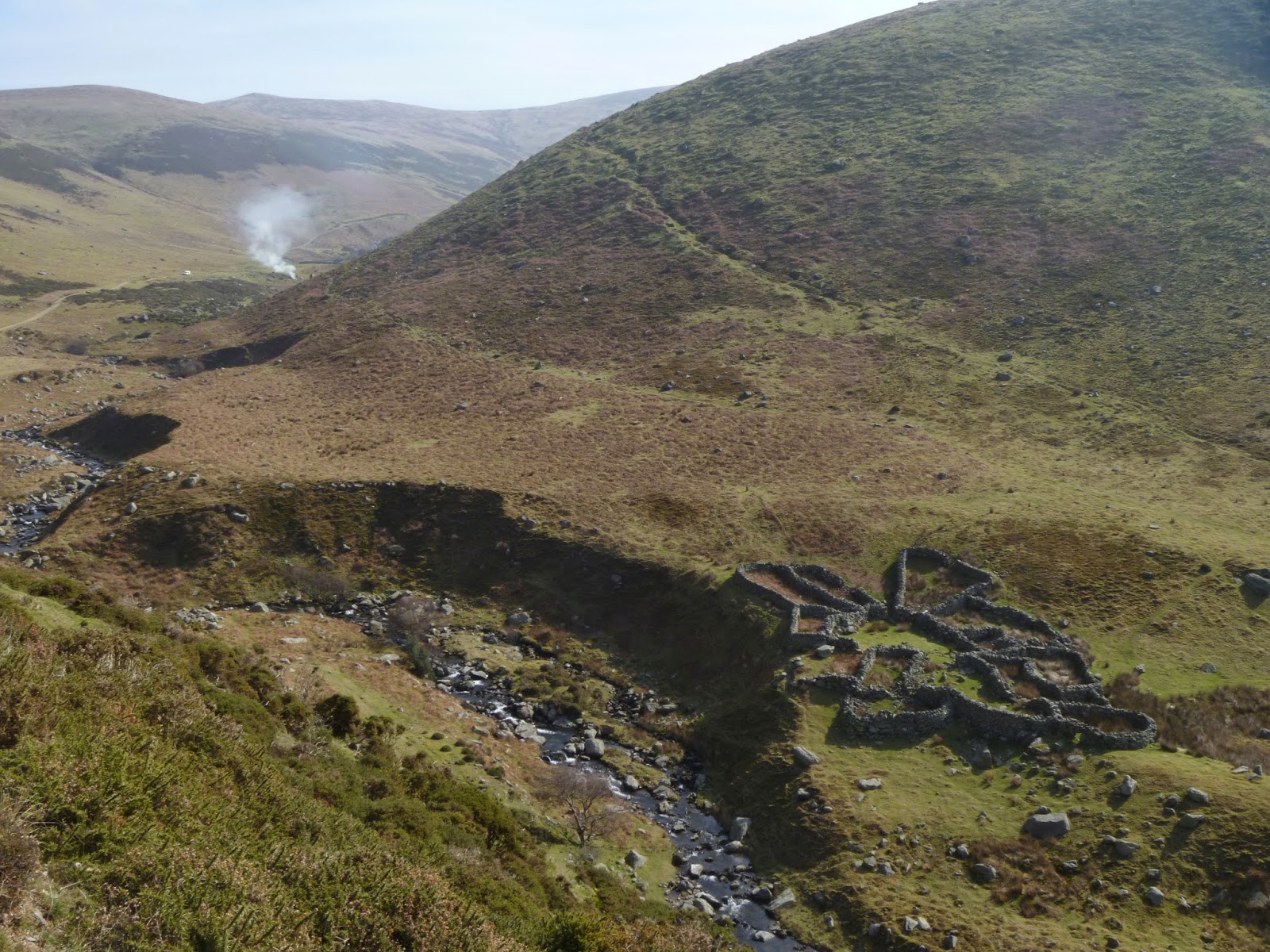 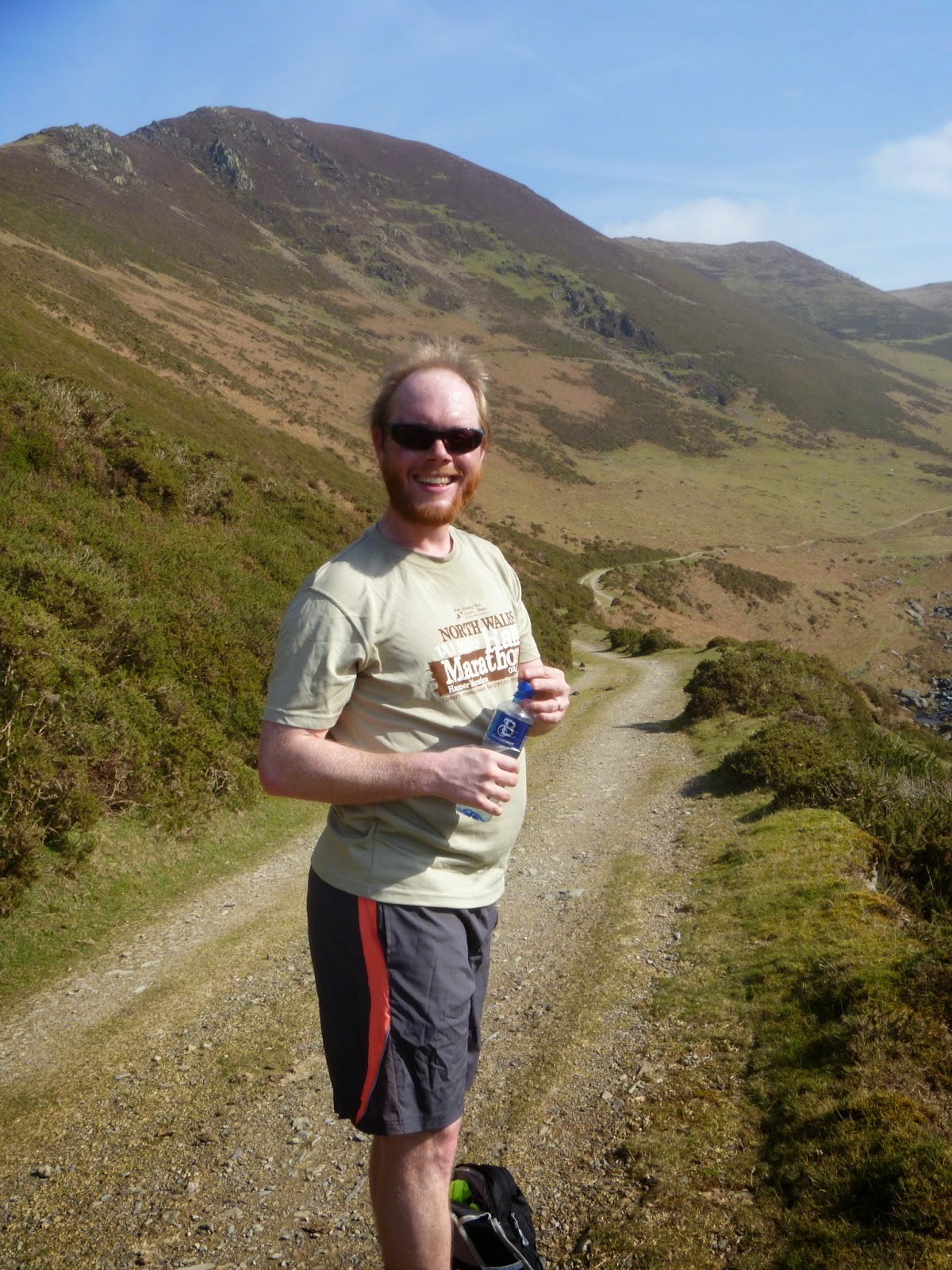 Gordy having a good time 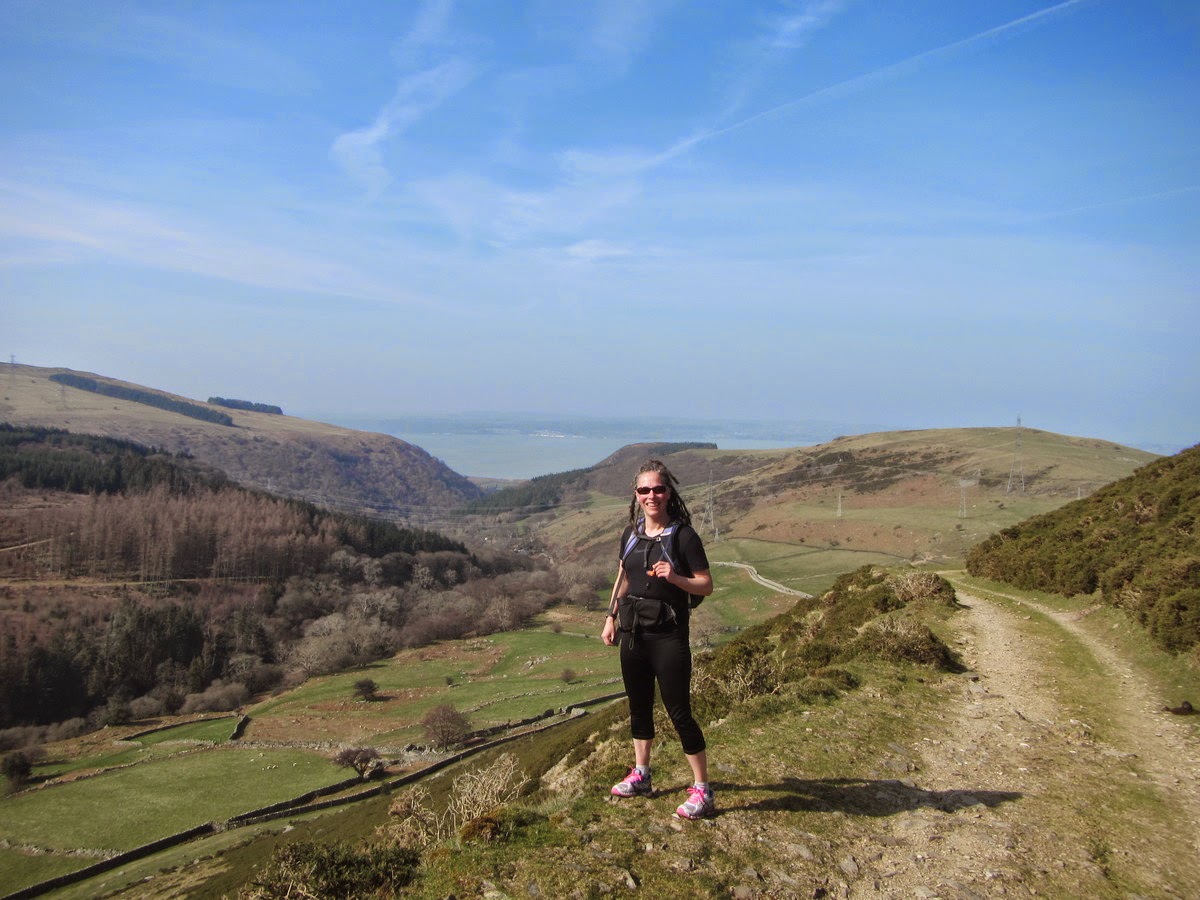 Me and a view over the strait, and Anglesey in the background (pic by Gordy, of course)


The route went through very dreamy empty landscape. I could see why this road was not in much use anymore. It must have been the road from the Roman camp in Chester to Caernarfon! Now it went from nothing to nothing. Suited us well. 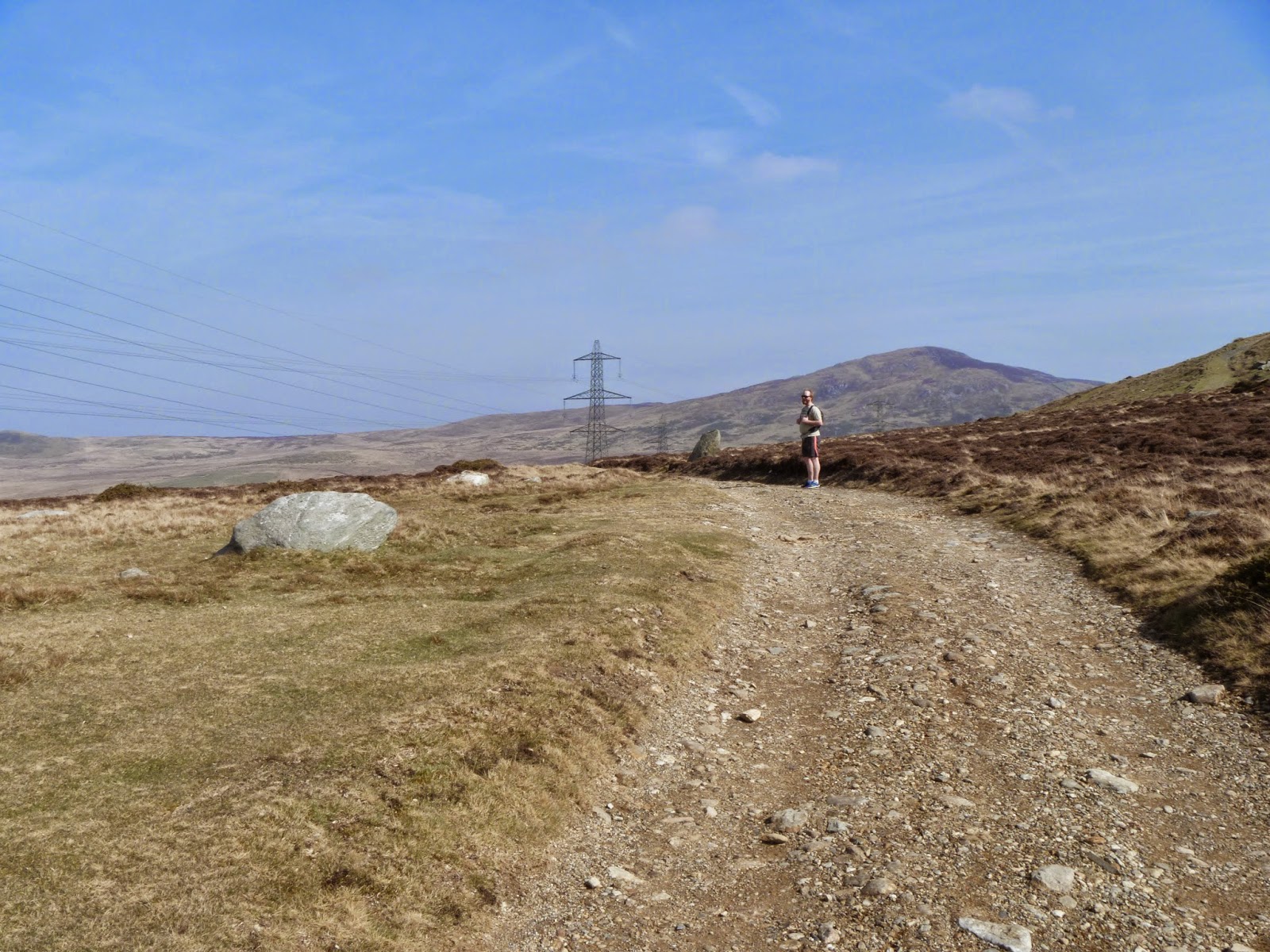 The empty landscape the old Roman road went through

After 3 hours on the road we hit the furthest point. We would surely be slower than the week before! But I felt a great deal better. We turned around. I was faster than Gordy, and ran to the parking lot where he wanted to eat a bar in order to revitalise himself. I waited for him there, being amused by a bloke by a dog that was as defiant as it was intellectually challenged. Funny! When Gordy arrived and we ate the bars we saw the chap struggle to get away. Oh dear! Stuck in the mud! We tried to help out, but he had lodged that Audi firmly in the gunk.

After a lot of pushing, mud flying, carpets under wheels and whatnot the chap suggested I drive the car while he pushes. He looked stronger than me! And after I got my head around his automatic (haven't driven one since Ireland) we got out. Success! I helped myself to a cuddle from his hilarious dog as a reward, and then we were off in opposite directions. I looked like I had done a fell race. 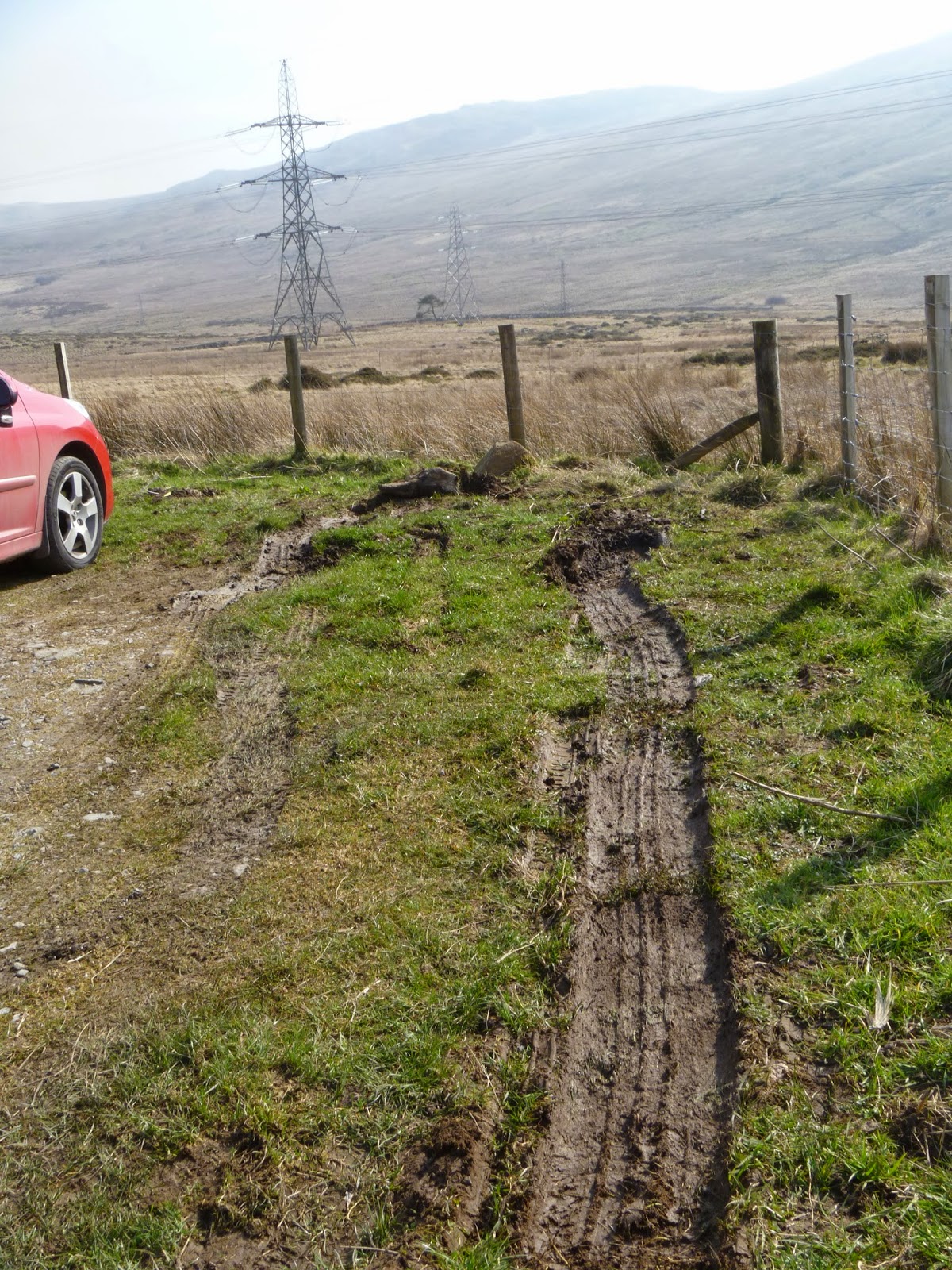 The mess the Audi left

We plodded back. It went rather smooth! Gordy was happy with the route I had chosen. And soon we were on the asphalt again. And then we were on the road for 4 hours! No idea how long that car-pushing had taken. But we both still felt good. And even after four hours my knee wasn't hurting. Excellent! This whole training malarkey works!

When we were really close Gordy did sprints to see if he could. He sure could! I only accelerated a bit. Sprinting is for daft people. And then we were back at the car. I wasn't even dead! That marathon might work out! Spiffing!

I drove Gordy home, where he offered me some sports drink. Not sure if that was the reason, but I would not get a headache afterwards, which is unusual after a long run. All good!

Next week the plan is to do another long one, this time with Gordy's wife (who is coming over from the USA) joining. Will be fun! And then the races are almost upon us!

PS Between running and posting this Gordy has sprained his ankle playing football - there go the plans for a 3-person run! Oh dear.
Posted by Margot at 09:29