It is not always a good idea to prussick down a rope without bringing the tools to climb back up. A situation in which it isn't could be if you only had 2 hours of sleep the night before, and the only way out rather than back up the rope would be to swim across four flooded underground chambers, one of which rather large. And underground water tends to be cold. Very cold.

Nobody would do that, right? Well, you'd be surprised. It wasn't me, evidently! I tend to love underground swimming, and I am very wary of going down a rope without being sure I can go back up again. So I went down that rope in a good layer of neoprene, and full SRT kit.

Where were we, anyway? And why such a wet place? Well, we really wanted to take our ROV for a dive again, and one needs water for that. So hence us choosing Diffwys mine, which has all these flooded chambers. But the ROV-herdsman said he was too busy to sort out the ROV for a trip, so we almost went elsewhere. But instead of rerouting we just decided to go for a swim without robotic companion. A spiffing idea! Don and Paul weren't keen on the whole swimming idea, and to be honest, Paul wasn't even keen on dropping the pitch, but Don could just climb up after having seen all there was to see in the chamber at the bottom of the pitch, and Paul could just stay at the top. Phil, Simon, David and me would do the round trip. Was the idea.

We gathered in Blaenau, where a cold wind blew. Taking your clothes off in order to put on a wetsuit didn't seem attractive at all! Phil had made sure he wore it already. Changing in the warmth of a building can be tempting! The drawback, though, was that the walk up to then entrance is a fair, steepish hike, and that is quite awful in neoprene. And as well; he couldn't easily go for a leak like that. I really needed one before getting kitted up.

We drove up to the bottom of the path, where Simon changed into neoprene too. I decided to get into my furry suit, and change inside the mine. It seemed more comfortable, and it would get us off that windy parking place quicker! Soon we set off in the glorious moonshine. We first went into a low adit, where David and I changed into neoprene, and we all left behind what we didn't think we'd need. We went back out, clambered up the hill, and went into a higher adit, where, behind a nice chamber, the top of the pitch was. Simon was wondering if he could just curl up and fall asleep in the tunnel. Instead he dropped the pitch, as did everybody except Paul.

Phil and Simon inflated a dingy they found there; it had been brought by them on a previous trip. The slate in unforgiving to rubber, though, and it was leaky like a colander. It wouldn't get anybody across! But it could carry kit. Wearing SRT kit while swimming reduces buoyancy, and these chambers are slightly treacherous. The cold water easily inspires cramp!

We first had a look in the chamber itself. Not many people go here, and many artifacts were scattered around! Simon frantically took some pictures before he too took off his harness. Soon we were all in the water! A lot of spluttering and complaining ensued. And David quickly headed for the other side. I followed; underground swimming is best not done alone. The other men seemed slow to follow!

When we got to the other side (a fair distance) we heard them call. They weren't coming! They figured it was too cold. Oh well. Then they could take our kit back up the rope while we swam all the chambers back to our clothes. 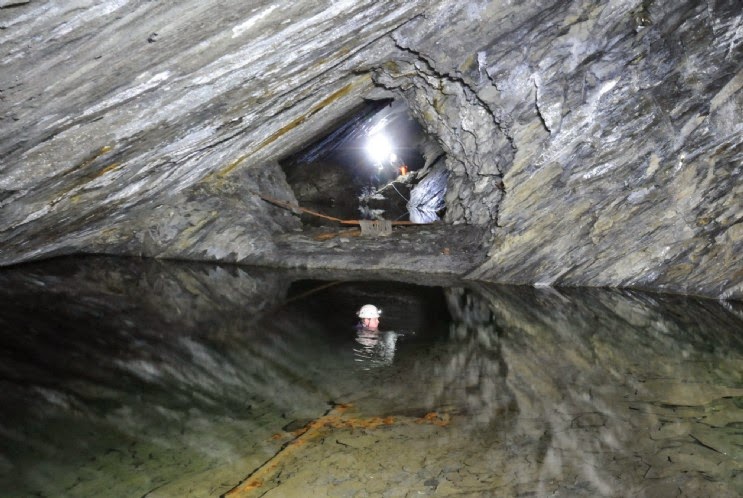 A picture from an earlier trip; pic by David

We crossed the next chamber. A smally! But with nice hobnailed boots prints in the level beyond. This doesn't go, though; we crossed back, and then crossed the first chamber again, but in the perpendicular direction, towards the next one. We had fun! The chambers were easy to get out of, and the water was clear. I was wearing my new neoprene hood. What an invention! It renders you as good as deaf, but who needs to hear if they can keep their neck warm. 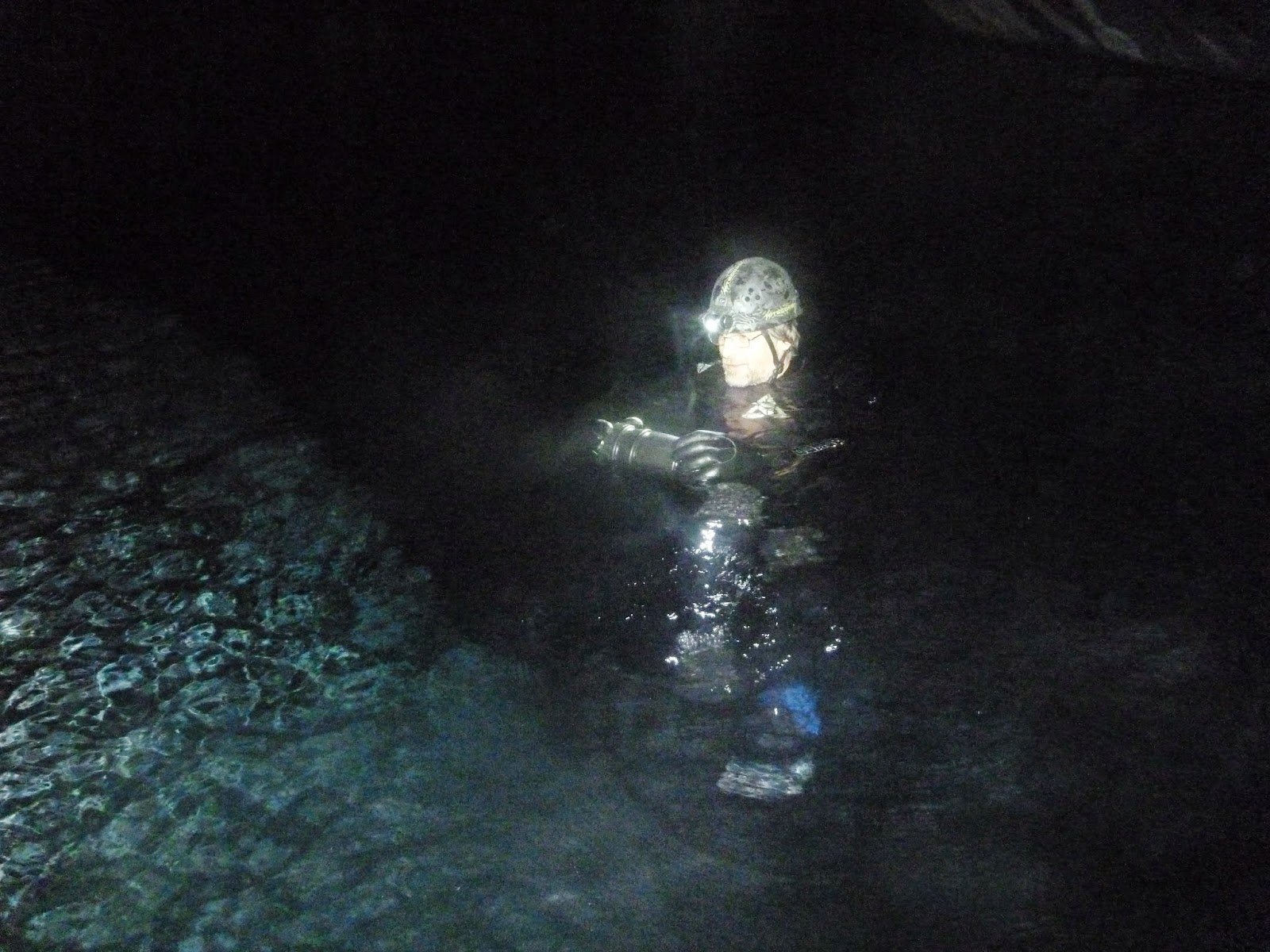 Rather soon we suddenly found ourselves back where we had left our bags. Dry clothes! Lovely! By then we were a bit cold. I happily maneuvered myself into my (almost) dry furry suit. I hang out the oversuit; I had been swimming in it. I figure it provides buoyancy, and perhaps something to hold on to in case of emergency. But I could not put on dry socks. I hadn't brought any. And it wouldn't have been much use; I already overtopped my boots on the way up and in. So while I was quite snug overall, my feet were going from cold to numb. Oh dear!

Soon Paul appeared. He had been pootling around, and now came to light his stove. We could do with some soup! And while the water warmed up the others appeared too. Simon was wearing half my SRT kit; without it he would not have been able to get up the rope. It was good I had brought it with me!

After the lovely soup we went out. Simon had not brought any dry clothes so was still in his damp wetsuit, and David and me were eager to get our feet warm. So we moved at speed! My feet were alright after a short walk, but his (which are evidently bigger) would still numb after he had changed. I was glad we had come here. I would miss the next two trips due to work, but this one should keep me happy for all that time!