East End boys, and West End girls... the Pet Shop Boys made it sound relevant, but I had no idea what these geographic indications conjure up in their heads. And in the heads of the average Brit. They sang that when I was eight years old, and there was an awful lot I didn't understand, but even some thirty years later I still think I miss out on many cultural references by not knowing what (UK) places are associated with what. And one of the big geographical divisions in the UK seemed to be the north-south one. I had some concept of the perception of the gently rolling green hills of the south, and the chundering chimneys of the north, but I also realised these northern chimneys had largely stopped chundering a long time ago. I had seen the redbrick buildings of the former factories when passing through places like Leeds on the way to Durham and York, though; there clearly was something left of the industrial past. So now, after having extensively roamed Devon and Cornwall (although the archetypical southern counties are, I think, the so-called “home counties” in the East, like Kent and Essex) I would move north, and see for myself. And the Festival of Ideas allowed for my knowledge to be rapidly expanded by other people’s expert opinions.

I attended two talks on the topic; one on the north-south health divide, and one on whether literature had demonized the north. The latter talk was done by the former northern correspondent of the Guardian, Martin Wainwright, who wasn’t particularly forthcoming with hard facts or cold analysis, but who charmed the entire audience with his endearing persona. I immediately bought his book on the topic, but I feel unable to reproduce the content of his wandering presentation. The talk on health, by Tim Doran, was a lot more fact-based, and started with a historical overview; it turned out that the Normans had already divided up the country in a (desirable) southern chunk and a (not so desirable) northern one. The border ran, roughly, from the Severn to the Humber. What also runs from the Severn to the Humber is a ridge of hills (of which the Cotswolds are a part) which separates the older, ore-containing northern rocks and the soft, fertile southern sediments. And leaves the latter in a rain shadow. So a north-south divide is a natural thing. But has man made it unnecessarily big? To name something; the BBC does have a northern correspondent, but not a southern one. And the speaker warned us: his talk would compare to listening to a Smiths album, which is an elegant way of saying “yes the gap is unnecessarily big”, but he promised glimmers of hope. And, he pointed out, when it came to demographics, York was more of a southern town than a northern one. We in the audience could have an outsider view on all the misery! 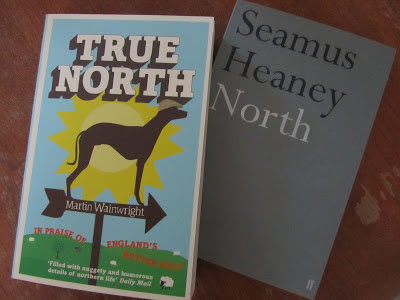 Two "northern" books I bought during the Festival

So is there a health divide? There sure is! He showed us, just to roughly illustrate the point, three maps of England. In colour-coding, the occurrences of cancer, cardiovascular diseases, and of lung ailments were indicated. What we saw was a largely yellow map, with a dark red band from the Mersey to the Humber. On each of the three maps. Oh dear. But that was not all; I noticed a red blob in the yellow south. In Plymouth, apparently, there is much more cancer and cardiovascular mayhem than in the surrounding areas. But in general these northern diseases, and related misery, causes 44.000 excess deaths in the north each year.

And is there more than geology and climate to cause that? Yes; there is a very strong correlation between local authorities having their budgets cut, and dropping life expectancy. And the London-decided financial gap fluctuates; Thatcher got a lot of stick for increasing it. Major and Blair decreased it a bit. But the biggest increase was during Brown. Doran did not have information on Cameron yet...

So what can be done? Money can simply be moved north. And it can be shifted indirectly too: if you move resources up, like they’ve just done with the BBC, you move jobs and wealth and health up. And what else? There was an example of a GP in a deprived Welsh village, who closely monitored all his patients, if necessarily with them kicking and screaming, and made sure he detected any early sign of a serious disease. But that was one very driven individual; you can’t force people to be that driven. The government tried to inspire other GP’s to do something similar by giving out financial incentives for monitoring early signs of especially abundant diseases, but that only lead to the less common diseases to go unnoticed for longer.

So what to do? I once heard the suggestion on the radio that the government should choose its seat in the most deprived part of the country, so the MP’s would experience first-hand what it’s like to live with the lack of facilities that prevail there. And they weren’t allowed to leave until things had improved. Maybe that would help; that would surely channel some money to where it’s needed. And that would very often be in the North.

And what else? Doran had a whole slide with solutions, or rather, a slide with one solution; “don’t do anything stupid”. Well everyone in the north can take that one to heart! Who could object. And I think I accidentally even did something rather smart; I might have moved hundreds of kilometers north, but demographically and socioeconomically I moved about that same distance south...