The UK isn't a land of cyclists. But it is a land with cyclists. And some of these cyclists, organized under the moniker "Love to Ride", want to MAKE it a land of cyclists. And they have some initiative going; "the Cycle Challenge". It's a national thing you can subscribe to as a company or other body. The idea is to get more people on a bicycle, and also more often. And they use competition to boost enthusiasm.
The University of York accepted the challenge, and so did the Environment Department. So everybody within these institutions was encouraged to jump on their bikes for at least ten minutes as often as possible. And the body with the highest percentages of participants would win (within their category; the university didn't have to compete with the cornershop with its three employees). I'm not sure if you got points for total distance covered, or percentage of new bikers; whether you were new to it was registered too. I didn't ride a fathom more than I otherwise would have, but I was still the department's #2. And I can now reveal that in the first three weeks of July, I rode 132.8 miles, burnt an estimated 4914 Calories, and saved an estimated 43 kg of CO2 by not driving. 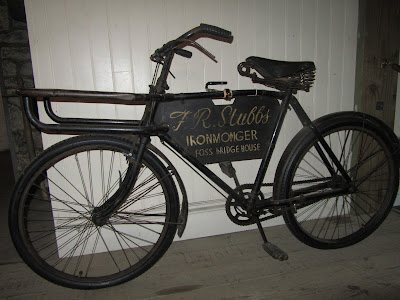 A bike seen in the Yorkshire Museum of Farming
The University did well in this; they took the 2nd place within York, in the category 500+ staff. And as this challenge has an environmental purpose, one would assume the Environment Department would do rather well. But not quite, actually! We competed in the 20-49 staff category, and we were only 24th. And within the departments of the University, regardless of size, we were beaten by bodies such as the Centre For Reviews And Dissemination, and the Centre For English Language Teaching. But the number one was the Stockholm Environment Institute, so something environmental after all! It's not just lip service...
Posted by Margot at 08:43