It was a caving weekend, after all! There WAS some caving on the menu. We would do the above mentioned cave on Sunday. It’s not a long trip, so we would make it out in time to drive all the way back to York.

We drove to a field, and reluctantly got into our kit. It was so warm! But after having crossed the field we would be rewarded by some nice underground coolness. I was keen to try my new light.

The cave starts with a number of fixed ladders, after which you go around a tight corner and get to the only (double) SRT pitch. I wasn’t sure if I had ever done SRT in a cave before, but it’s of course quite the same as in mines.

After the ropework there was a crawl, and then a puddle. Nice! We were still quite hot.

From there we made a round trip, with the usual crawling, clambering and splashing. We came to the end, where a dig was clearly still in progress. But we didn’t check it out too much; we wanted to keep this trip shortish. So after having been to the end we went back, had a last refreshing plunge in the puddle (we even saw an albino fish!) we went back up and out. We got out of our caving kit in seconds. And then went for ice cream! 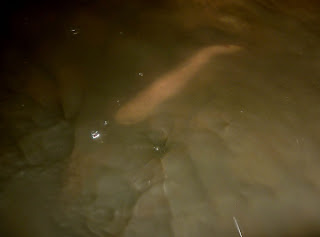 It had not been too much of a spectacular trip, but I had tried out my lamp; after several hours it was still going strong! Very good. And after taking our tents down and driving back, it was already 10PM by the time we were home. It shouldn’t have been any later!
Posted by Margot at 17:15