Before I decided to move there, I had only been to York once. The occasion was a small scientific conference: All at Sea. It featured coastal people of all kinds: specialists on sea level change, coastal protection, marine archaeologists; as long as it had something to do with coastal seas and relevance to humans. It’s only a two day conference, and I hadn’t seen much of York. But it was all I had to go on when trying to imagine my new hometown!

By some coincidence, soon after I’d move to York, there would be another All at Sea conference. I registered a bit absent-mindedly; I was in the middle of the house-moving hassle. But I got my abstract ready, and my presentation, and off I was. The previous time I had had a 6 hour train ride; this time it was more like a 6 minute bike ride. The venue was on my side of town!

It was a good meeting. The talks were very interesting, and it was nice to see all sorts of fellow scientists again. There were, for instance, Michael Tooley (don’t be fooled by the gardening focus on his homepage; he’s retired, and enjoys non-scientific pursuits, but that doesn’t mean he’s not a respected and active researcher!) and David Smith, the grandfathers of British sea-level research. And Ivan Haigh, the new head of the iGlass project. And Louise, myformer Plymouth colleague. And Gerd, the coastal geomorphologist, who still is based in Plymouth. And a conference always allows for socialising. There was a conference dinner included in the event, and before and after this dinner we tried out some pubs. I got to meet lots of new people! That always is a good thing. 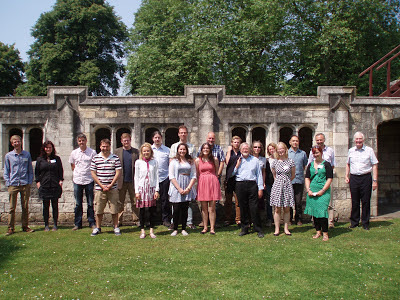 A group picture, unfortunately taken when quite some people had already left... of those named David Smith is still there (far right) and Louise (in pink dress).

The best thing though, perhaps, was Ivan taking me aside after the presentation I gave. He had some very good suggestions on how I could make my story a bit stronger. These were most appreciated! So the previous time I would unknowingly meet my future home, and this time I was given valuable insight. All at Sea? Not me!
Posted by Margot at 18:02