Next year, the Tour de France will allegedly start in York. I'm not excited about that at all! If I want to look at people on bicycles I'll look around me during my commute. Plenty of them! Some rather fast as well. But on my way back from the moors I wasn't given any chance; a policeman (or a race official) on a motorbike gestured me (and all the other drivers) off the road. There was a bicycle race coming! So what can you do. I got out, got my camera ready and almost failed to see the horizontal lines whizzing past that must have been the only observable manifestation of the first two cyclists. And then the peloton followed! As they were going downhill they were gone in a jiffy, and I could continue my journey home. Even though I enjoyed watching that, I've seen enough road racing for the rest of the year now! 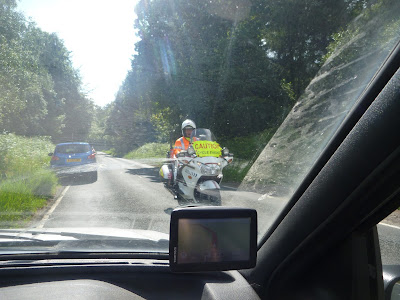 The road's not ours! 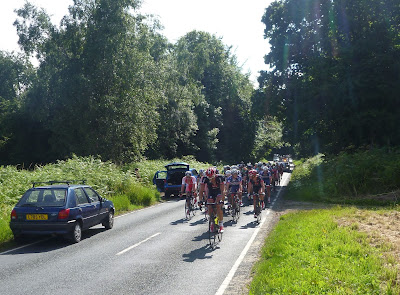 Bicycle race passing past my modest car
Posted by Margot at 09:58