Maybe "York Caving Club" is as inaccurate a name as "Plymouth Caving Group". The York bit is quite accurate (I think we had one guy from Whitby with us, the rest were York residents), but we don't only cave. Luckily, we do some mine trips, but we need not even be underground; there was a canoeing trip in the diary! The July trip would take us to the Forest of Dean, where we would do one day of canoeing on the river Wye, and one day of caving. Sounded nice!

As the previous time, one car hoovered up all the Friday-after-work cavers (two chaps had left earlier, and taken all the bulky stuff up so we would fit with five in one car) and drove south. When we got to Rushmore Farm, where we'd stay, our tents were already pitched! Very nice. 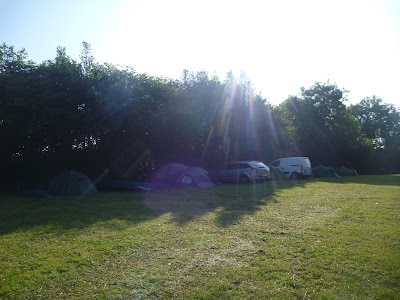 Our camp as it looked the next morning

The next morning we had to be at the canoe rental place at a given time, which reduced the amounts of faffing a bit. We made up for that when one car drove to the correct canoe rental, and the other one basically tried all of them before reaching the right one. Then we could get our canoes! And hand over our own vessels: one of the couples had a beautiful self-made canoe, and one of the guys had rescued a river kayak from being chucked away, and was going to try that one out. All of that was then driven upstream to a handy launching spot, from which we would paddle back. And it was the hottest day of the year so far; many sought the coolness of the river! We spent quite some time in the queue before we could launch ours. And then we were off! 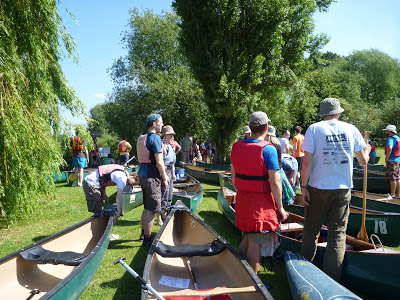 After about 100 meters on the water the buoyancy aids came off and the ciders were opened. The sun shone, the water was calm, the birds were singing, the swans gliding along, it was a nice day. The canoes were well up to the task. Gary in his river kayak struggled a bit; my experience is that these bloody things move to the right when you paddle left, and vice versa, and never really go forward. And I know that's my inexperience, but Gary had similar amounts of that, so he struggled in the same way. Sometimes that led to him suicidally hurling himself in front of a canoe. By accident. But it got better with time; soon he was the fastest. 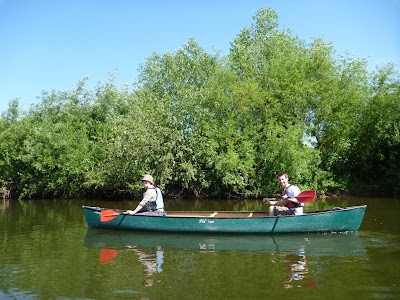 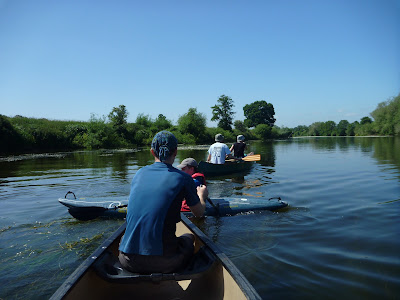 Gary throwing himself in front of our canoe

After a while the cider started to have its effect, and we beached to canoes to relieve ourselves. And while we were on the beach anyway, we might as well get into our swimwear (or just strip down to underwear) and jump in for some cooling down. It was nice! 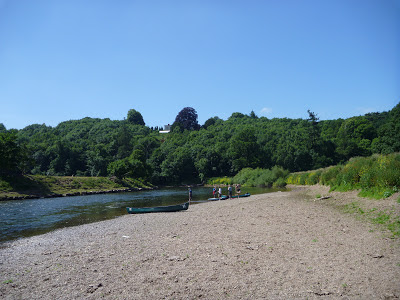 The first is ready for a swim!

Some time later we came to one of the pubs along the route, so we carried the canoes up the bank and set out for a pub lunch. And a pint of lager, to go with all the ciders that had preceded it. This was quite a nice relaxed day! Or at least; it had been so far. When we got back to the boats Gary found that his paddle was no longer there. It had been securely inside the kayak, so it couldn't have washed away. It must have been stolen! Luckily Richard and Nikki had a spare paddle with their fancy canoe, but it was of course a single-bladed one, which is hardly ideal for a kayak. But one has to make do with what one has. 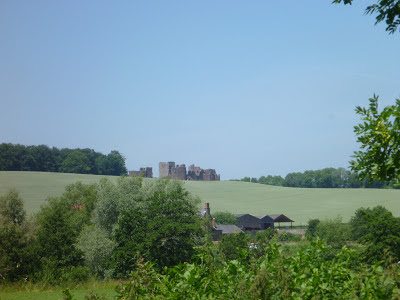 Castle we saw on the way to the pub

We continued. Now Gary was lagging behind a bit. And after a while he indicated he was fed up with propelling himself with inadequate means. So we tied him to the back of the canoe. Which lead to him swirling around the entire breadth of the river. So then we fastened him on the side. That was better! And with this daft canoe-kayak raft we continued to the end. By then most of us had seen quite enough sun for a day (we're cavers, after all). We were fairly happy to get off the water and return to the campsite for a shower. But it had been a great trip! Just a bit sad that one can't seem to leave one's paddle unsupervised. And we were now all so boiled we looked forward to going underground the next day! 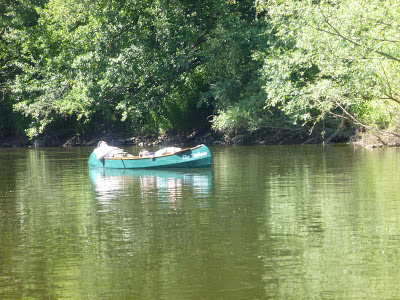 Richard and Nikki overcome by the sun