Since having joined the YCC I had been down three caves. I missed mines! So when suddenly a call appeared on the YCC forum, of a guy who wanted to take some people down some mine, I didn't know how fast I should express my interest. And I wasn't the only one; Matt and Gary were coming too. That meant I could hitch a ride, and didn't have to drive 1.5 hr in a hot car without being able to open the windows (the electric windows don't open anymore, and it's not the fuse! And if it isn't the fuse, it seems to be hard to repair.)


Looking out of the window I got my first glance of the Moors. It looked nice! We stopped in a cute village, where lots of people in boiler suits indicated this was the right spot. We met Andy, the ringleader, and the others. We quickly changed, and off we were, headed for Booze! And yes that is capitalized on purpose. We were heading for Booze mine, near the village of Booze! An interesting omen regarding my career as a Yorkshire miner. It was a very small slate mine. I was really happy to see the familiar blasted walls of a mine next to me! And this place was clearly frequently visited; when I reached beyond the beaten path, I was amazed by the entire floor being covered in canine foot prints. Had a fox decided to make this mine his home? An esoteric choice! 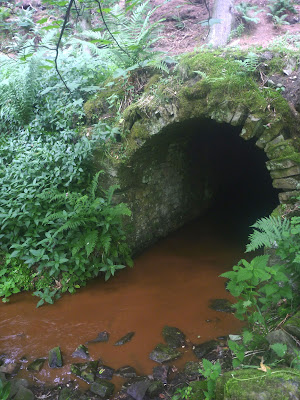 The entrance of Booze mine;  my first Yorkshire mine! 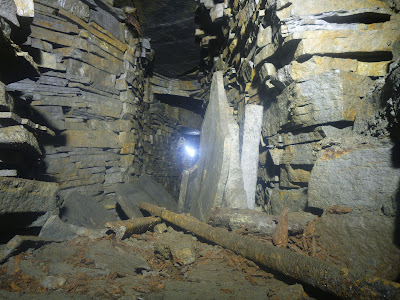 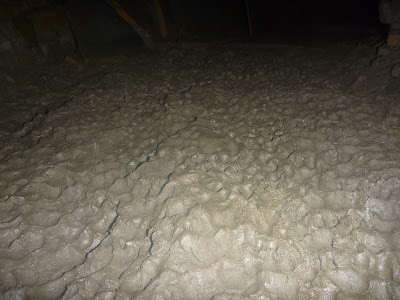 The canine footprints all over the floor 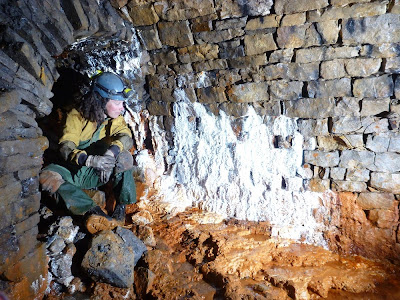 Time for some posing with nice flowstone. Pic by Gary. 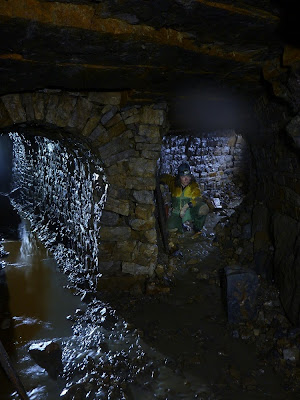 Three headlights and a model. Pic by Gary.

After this mine it was time for lunch. Matt threw me a sandwich. I hadn't expected that, but never underestimate his catering instinct! What a man. And it was even nice to sit in the sun, which wasn't particularly powerful this day; quite a difference with preceding weeks.

After lunch we went on with a core group; some three men had only come for the Booze and left. We went up the hill, to explore the valley of a small stream. The whole valley was pockmarked with mine remnants like nothing on Earth! It was quite nice. The little stream had more mine spoils to transport than it could shake a stick at. The resulting landscape was quite special! 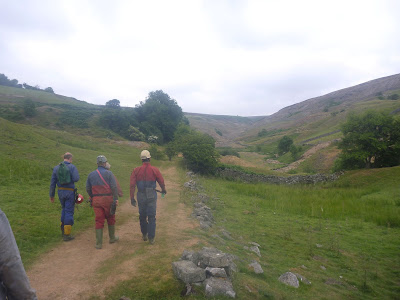 Onwards through the Dales! 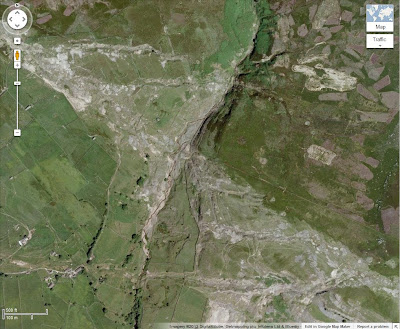 The area from the air: notice the heavy mine scarring! 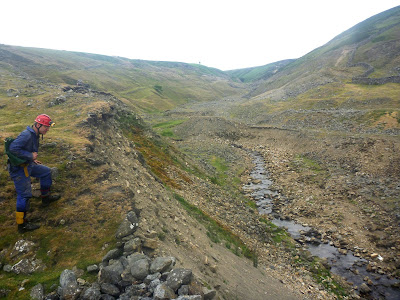 Lots of sediment; not very much else

We went into another adit. I had the impression mines here were rather small and straightforward. Only one level in both these places! A next place confirmed that, but offered a challenge anyway. Andy explained he had only found this entrance last week, and didn't know what was in it. But he suggested it might be wet. When Gary looked in he said "you MUST be kidding!". He wasn't. Soon Andy was up to his waist in water, making interesting sounds. No time later the rest of es (except some wise people staying at the surface) were doing the same. The water was freezing! And the adit showed no sign of coming to an end.

We walked on, reflecting on the physiological effects of such water temperature. And the adit went on and on. After what seemed an an eternity we saw big boulders in the water. The end? No; almost. You could climb over the boulders and proceed a little bit further. It ended in what seemed to be a small stope down. Gary took some pictures; my education as flash monkey came in handy here.And then we headed back, as fast as we could. We were all numb from the waist down!


We climbed back up onto the hillslope, to the next mine. That was a crawling case. And next we went past a water wheel pit, to a well in a field of fern. It lead into workings, but it was so silted up you couldn't pass. We went back to the water wheel pit; there was another entrance, too small to get into. The men dug away at it for a while, but without tools they wouldn't get too far. So we went on to two more mines. And then it was beer O'clock! Except that it wasn't; everybody seemed to go their own way, so we chose to be home in time for dinner over having a pint. And we'd had Booze, anyway... 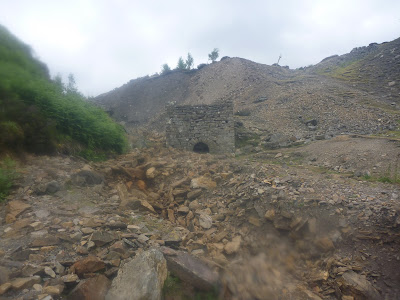 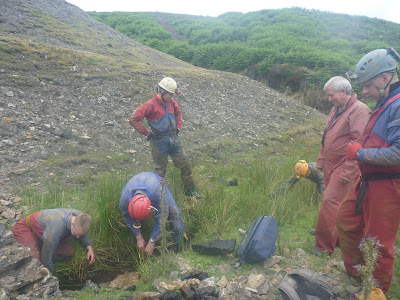 Trying to drain an adit 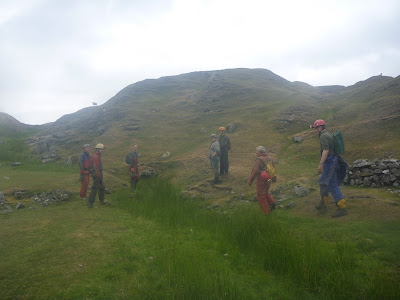 All miners gathering at the last entrance, under the watchful eye of a slightly ominous sheep