It took me 7 hours to drive from Plymouth to York. I know many people would do it faster (like people who have a cigarette lighter in their car, and who can drive on satnav all the way), but it remains a long drive. How many people would come visit me so far away?

My first southern visitor was going north anyway; that helps. Lionel’s girlfriend Corinne has lived in Yorkshire for many years, and she still has many friends here. And they were coming up to visit them. And they would visit me, too! I looked forward to that.

They’d come on Friday. I worked until 16.45, rode home, and prepared an elaborate meal in much haste, as they were due at 18.00. And then they arrived, in the summer heat. I showed them their room and the rest of the house. I’m glad they were impressed! And they impressed me too; they had brought a coolbox with chilled white wine! That had priority over food. We drank the wine in the courtyard, catching up. And then we went indoors for dinner. By dinner table has been inaugurated!

After dinner we went back to the courtyard. It was still a very hot evening, and outside one at least gets a breeze. And we made plans for the next day; they would first do some necessary shopping, and then go to an air field where a special “Bücker Jungmann” gathering was taking place. That made perfect sense, as Corinne is a stunt pilot. I had never heard of the things but they seem to be very special. Suddenly she said I should come; she would be catching up with all sorts of people Lionel didn’t know, and he could do with someone to hang out with himself. And I’d never been to such an air field, let alone an air show! So I accepted the invitation.

It felt daft to get into my car with the non-opening windows on a day that would hit >30°C, but that was what it took. After an hour of being boiled I reached the airfield. At the gate, it only took Corinne’s name to get in. And she and Lionel (he’s already become quite knowledgeable on the topic) showed me around. Small airplanes as far as the eye can see! And in turn they went into the air to perform low fly-overs, loopings, and more stomach-churning stunts. There were some old-timer cars, too! It was very nice. And I learned quite a lot about planes. 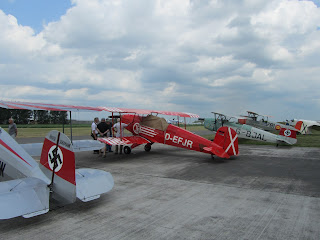 This was what it was all about: the Bücker Jungmanns! 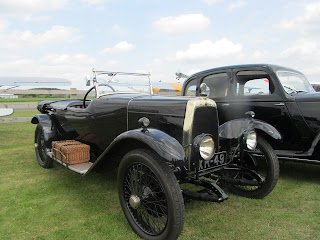 There were nice cars too 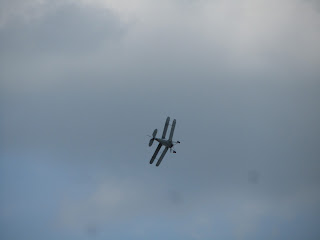 The pilots showed off with all sorts of aerobatics 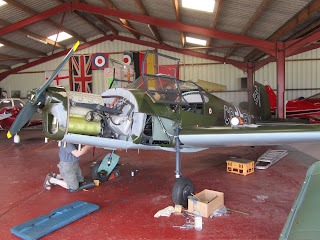 Some pilots first had some work to do 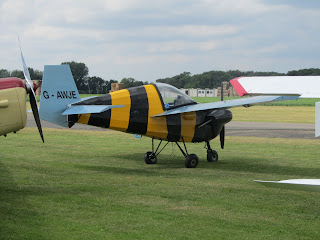 This was my favourite plane: the "bumblebee"! 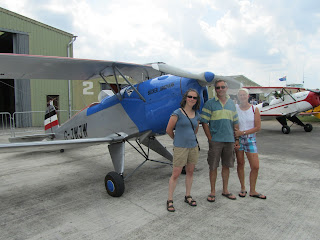 Lionel, Corinne and me posing with a Jungmann

Something else there was a lot of there was sun. I got a bit baked! So after some 1.5 hours I said goodbye, and got back into my furnace-disguised-as-a-car. Back in York I did see some small planes in the air: would that be ones I’d seen earlier?

Lionel and Corinne said they’d visit again next time they’d come up north. I hope they indeed do!
Posted by Margot at 10:21