I have a lovely house now. And I try to sometimes be there. And not be in the office. I don’t only go there for work; I also got there to blog and phone my mum and do such things. But it should be possible to do that at home. So far I’d worked with a USB modem; it does give you some internet access, but it’s not great. It was hardly feasible to upload pictures onto the blog, for instance. And quite often the whole page wouldn’t properly load. Time for something better. So I checked rates and reviews online, and chose a new company offering broadband. An appointment was made for installation.

The chap showed up punctually. I thought he’d just plug things into my phone line, but he took a look at it and declared it belonged to the wrong company. But he could install a new one! That sounded nice, but it is a rented house, and I can’t just go and have chaps drill through the wall. Luckily the landlord was easily reached, and welcomed improved infrastructure at no extra cost for himself. So the drill could come out! 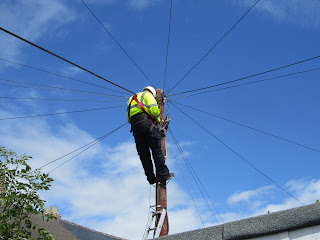 The chap connecting my house to a pole full of spaghetti

Some two hours later the installer left, and I could try out the new configuration. To be honest, I haven’t really figured it out yet! The manual only gives directions for Windows XP and Vista, and my little netbook is still on Windows 7. I looked up what you’re supposed to do then, but it didn’t seem to make sense. I seem to be connected, but internet is still terrible. Just writing and publishing a blog post can take forever, though all the reloading and refreshing and failing to get things working. Maybe I should get a better laptop. Hmm. This is the slippery slope that can end in throwing a lot of money down the drain, isn’t it? And otherwise it’s back to the office in the weekend, which was exactly what I tried to avoid. And then the investment wasn’t very much worth it...
Posted by Margot at 09:37

I do really like your photo for the story...