There was a sign in the supermarket. It announced the 100th anniversary of above railway. I had never heard of it, but it sounded nice! And I had nothing else planned that Saturday, so that was easy.

I biked along a cycle path I had come to appreciate; it's nice and green, and quiet, and pretty long. It had the looks of an old railway line. Some research afterwards makes me assume I was actually biking on the old Derwent Valley Rail track... a nice way of getting to the Yorkshire Museum of Farming, which is the home of the Derwent Valley Light Railway society, and the goal of my journey.

I was welcomed by two men in hi-viz. They pointed cars in the direction of vacant parking spaces. They seemed utterly astonished by the appearance of a bike. It had only been half an hour, and I live on the other side of town! About as far as you can live within York. Oh well. They identified a fence I could lock my bike to.

The first thing I did was take a ride on the steam train. It can't go very far! But it was nice. And ther was an old Ford rail bus trundling around too. And some locomotive from Bristol was quietely leaking to itself on a piece of rails. 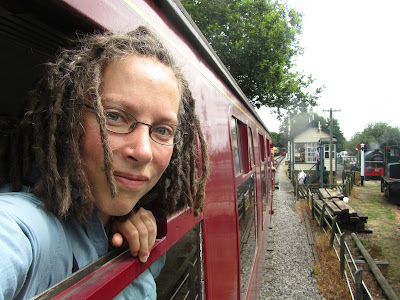 Me in the steam train! 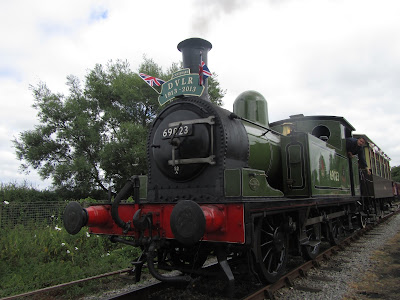 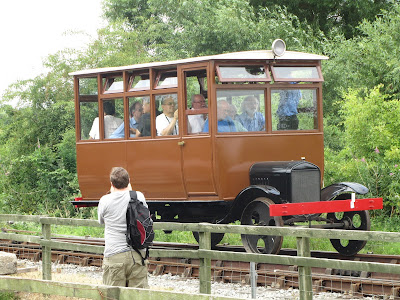 But there was more to see; it was a museum of farming, after all! They had all sorts of old equipment. The cattle-gelding kit was enough to make on shudder. More uplifting was th epropaganda for the Woman's Land Army. I had never heard of it, but it made sense it was there! With the men at the front and supply lines cut, women were needed to grow all the food they could! 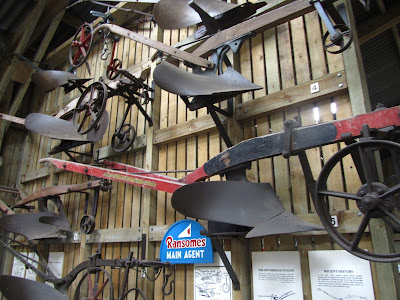 You can't not have a collection of ploughs in a farming museum. 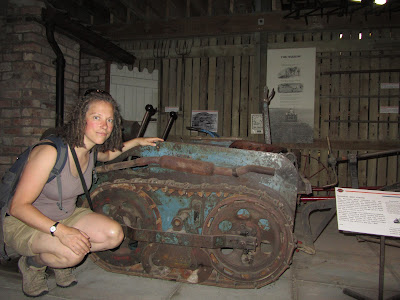 The cutest tractor there is - I want one!

And there's even more than that: the museum even boasts on a reconstructed Viking village, and a Roman fortress. And a nature route. And lots more. Still only enough to keep me busy for 2 hours, but it had been nice hours! And it had shown me a bit more local history. You can't have enough of that! A bicycle path is nicer if you know, for instance, that it has supplied nearby RAF airfield during the war, which went unnoticed because the track, by then some 30 years old, was overgrown with weed and not visible from the air...
Posted by Margot at 08:55