A second bedroom cannot fulfill its full potential without a bed. And I didn’t have one. Not for the second bedroom, that is; the first of course does. A big one. And I still have my sofa bed in the lounge. If I ever have many visitors I can stall two of them in there. But that’s a hassle; it was time I got me another bed. I felt a bit silly; I had not too long ago gotten rid of a perfectly good bed, but well, in Plymouth I didn’t really have the space to keep it for later. So I had to buy another one. And of course I went to my favourite shop, and indeed, they had a bed somewhere in the big disorganised pile of secondhand furniture. I bought it! And they would deliver it about 1.5 hrs before Hugh would arrive in York. He’d be the first to use it.

They were very punctual. And asked where I wanted that bed; in the second bedroom. So they carried it to the stairs. And up. About a meter. And then it was stuck. They tried it under a different angle; it just wouldn’t go up. I figured I’d have to sleep on the floor and send the bed back. But they didn’t give up so easily; the senior of the two men measured the piece of furniture and decided it might go through the window. So they parked the Luton closer to the facade of the house, and put the tail lift up; the younger guy managed to hand it to the older guy through the top window. The lower window doesn’t open. It did go through! Almost. It couldn’t get around the corner. It got stuck on the ceiling! Oh dear. Bed back, Margot on floor. But no! The older guy was still not defeated. He got out his Victorinox, and started taking the pane of the lower window apart. What the? But a minute later he lifted the double glass pane out. And without effort, the bed came through! And no time later, the window was back in original state, and the bed was ready for use. The men waved goodbye, and I had time for some chores and another coffee before I had to go and pick up Hugh. And he gave my new acquisition his OK! So all potential guests: my second bedroom is ready to receive you! And I’ve accidentally learned how to take out a window... 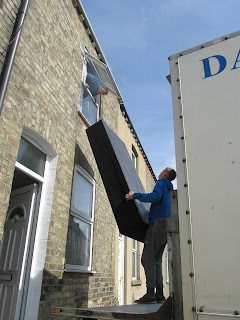 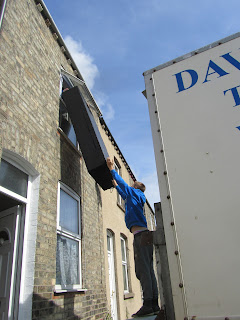 I'll bet his name was Macgyver?

I think it was!