You'd think that if you are a scientist, you have the opportunity to get very, very specialised. So specialised you lose track of the normal world. So much so you become the Hollywood stereotype of the geeky scientist with lab coat and thick glasses who doesn't know how to talk with other people. You would think.

Sometimes I wish it were so. A research project never only touches you own topic! There's always a lot that comes with it. Consider me, for instance. Forams are my thing. But forams alone are not anywhere near enough to do the project. You have to date the sediments you get them from, for instance. I had done 14C dating before, but only on marine sediments. So now I suddenly had to also get my head around 14C dating of terrestrial sediments. And lead 210 dating. And using caesium and americium. And using basal peats for correction of compaction. And find your way in the software that comes with turning all this age information into something that makes sense. And as if that isn't enough: add tephrochronology. As I explained in a few earlier blog posts: that boils down to finding ash from specific eruptions in your sediments, and using them as an age marker. 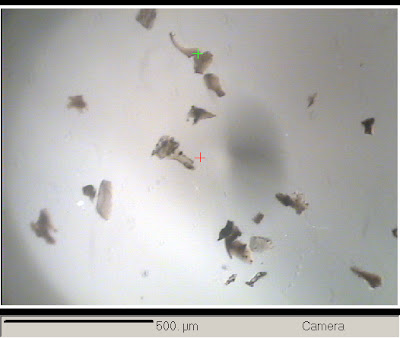 Ash shards
This plethora of topics is not at all unusual. But there's plenty of scope for it to to go wrong somewhere. And it did! When the time had come to look for the ash from the 1721 Katla eruption I had no idea how to go about it. Luckily we have an in-house tephrochronologist. She knows these things! So I asked her what to do. I don't think I asked specifically enough. I did end up with a most comprehensive protocol for tephra preparation, so I thought I had it figured out. I subsampled my sediments, prepared them accordingly (which involved a lot of physical violence to get all the organic matter out of the way), picked shards, and went to St Andrews to analyse them chemically.

There it went wrong. Our tephrochronologist had done her analyses in Edinburgh, where they have different equipment. In St Andrews they couldn't handle my samples. I never thought of checking whether they had any specific requirements; I figured they would say so if they did. And this was the fist expensive blunder.

But no panic; we just decided to try again in Edinburgh. So I happily picked yet another batch of glass shards out of my samples. And went to Edinburgh. Where they had mounted them in resin in a most impeccable manner. So now the real fun could start! 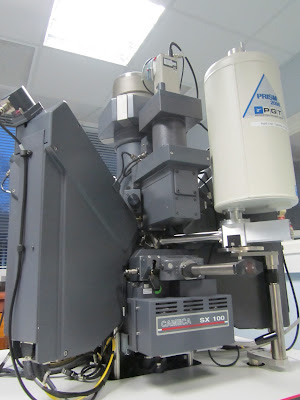 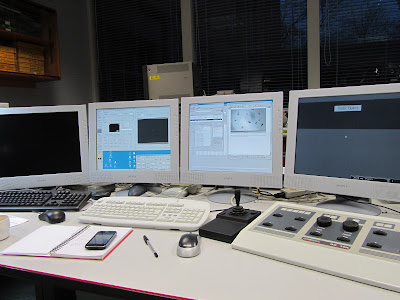 The stuff you need to run it
I kept a close eye on the results; if I would find a chemical signature of Katla that would point me in the right direction. You recognise Katla mainly on titanium and iron concentrations; very soon I found the right numbers. Excellent!

But there was something odd. One would expect a few percent sodium oxide in a Katla ash. There was hardly any in these otherwise so Katlaesque grains. What was going on? A specialist was brought in. A lot of discussion followed. The specialist asked "how did you prepare those samples?" And that was when the shit hit the fan. Big time.

It turned out the protocol I had followed was that for simple counting of shards. You don't easily dissolve them, so you can be quite harsh on the samples; you burn them, and boil them in corrosive liquids, in order to end up with only the siliceous fraction. But for chemical analysis you have to treat them like princesses. No disturbance, otherwise they lose their volatile components! And the most volatile is sodium. Shit. We first figured we didn't need a detailed analysis; just finding Katla would do. So I measured on, deep into the evening. But the next day the decision was taken we just weren't sure enough with these altered grains. I stopped. 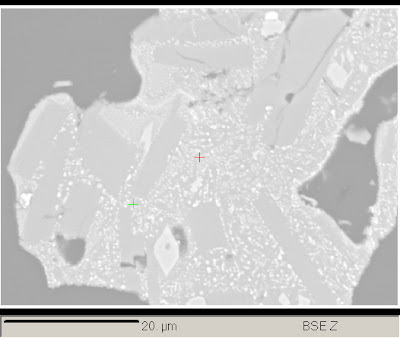 Not a shard of glass; this one, seen by SEM, is clearly crystalline
It had always struck me as somewhat bold to burn samples you still have to analyse. But it never occurred to me there were several protocols for tephra preparation, and that I had the wrong one. That was one expensive case of miscommunication. Of course I curse myself for not having checked. That's the problem with working in an unfamiliar field; you don't know what questions to ask. And it's no excuse; it's my project, I should be on top of things at all time. But it's quite a lot to stay on top of. And hating myself won't get me anywhere now; stubborn resignation is the only way. As it has been before, unfortunately.

So what now? I had three days of measuring time. I used only one. So what I'll now have to do is go home. Re-sample. Do the preparation again; this time with care. And then try to find these bloody elusive grains in the remaining two days, which have been moved to May. I do hope we'll finally find the darn Katla ash. It's cost too much time and money to still be funny if in the end it will all have been for nothing!
Posted by Margot at 10:10

Blunder? You asked an expert, got an answer and got to work. Are you suggesting the right procedure is ask an expert, get an answer, ask the expert whether they're absolutely sure, whether they really are an expert in the field to begin with, whether they have given you an entirely exhaustive answer and are whether they unconditionally convinced that this was the right answer to your particular question and not any other random question, double-check with someone else and then set to work? If so, please inform how much you think you would get done on an average day and how eager your colleagues would be to answer any of your questions after a few trials.

I've wondered for a while now: What equipment do you use for Carbon-dating? Because my company (www.highvolteng.com) makes Carbon-dating machines! They can be used for other dating-isotopes too. Calcium and Chlorine, e.g.
So maybe, if you ever become involved in the purchasing-process of one Carbon-dating machine, you can think of me!... ;-)

Hmm you're right. But I should have read the article a bit more closely that our group published on that field site before, and noticed there was a difference! Anyway. The lady who gave me the protocol will now make amends by showing me the correct method. But we WILL double-check if this time it really is correct...

And Lourens: we send our 14C samples to Scotland, where they have two accelerator mass spectrometers: 5 MV and 250 kV single stage. What that means I don't know, but you would! And I don't expect to be buying anything like that myself anywhere soon, but if it happens I will indeed think of you...