That didn't teach all of them equally well

Student fees go up to £9000.-. You’d better offer the students some quality for that! Roland does his part: he teaches a module in which the students do an entire sea level reconstruction project, using foraminifera, from the fieldwork all the way to the writing up. Fascinating! At least, that’s what I think.

The idea is: the students take surface samples and a core, and survey all of that. They count the forams in the surface samples, so they know at what elevation the various species live. Then they count the core sample, and then they figure out with what elevation the forams live that they encounter there. If they find an assemblage typical for 30 cm above sea level at half a meter down in the core, they know that when these sediments were deposited sea level was 80 cm below the current surface. And if you know where sea level is with respect to the surface nowadays, which they do, and they have a datapoint for every level in the core, they have a sea level reconstruction! Isn’t that magnificent. And such beautiful collaboration: tens of students all together contributing to such a dataset. 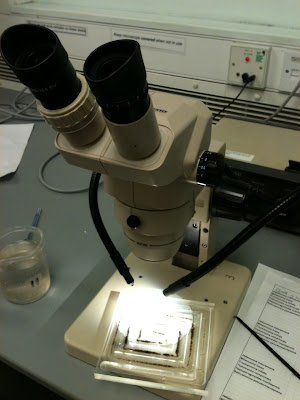 We went into the field and I was quite impressed by the students’ enthusiasm and skill (though there were the inevitable traces of standing around and hoping someone else will do something). During the microscope practicals I was also quite pleased with their achievements. And it’s the better students that involve you the most. But at the end of the exercise you get to see everybody’s results, including what students have been trying to hide. Most did a good job (though I suspect many were only counting the bigger forams!), but there were students who had only counted one sample, students who had counted the wrong sample, so some had been counted thrice while some had not been touched, and one student had just picked a few sand grains and hadn’t even realised he had missed the entire point, and some were quite sloppy with transferring their data from their paper counting sheet to a spreadsheet. There’s a lot that can go wrong! I’m interested to see how accurate the sea level curve is they can produce with such a data set.

And if you wonder: the samples that had been counted more than once did not yield the same results at the hand of the different students! But it’s a splendid training for professional life: they’re all bound to end up in situations where they will have to work with several colleagues, all with their own level of skill. Will you try to lift the weaker ones to a higher level, will you do the work yourself instead, will you shrug and live with it? Relevant questions…
Posted by Margot at 08:26