Inside the picket line

Economies are staggering and toppling over left and right! Old certainties have faded, We all have to tighten our belts, and get ready for hard times. And, ideally, do the tightening in a fairly distributed way. Is the UK government doing its best to spread the burden over British shoulders? I don't know, really. But on Wednesday the UK streets were clogged with people who think they do know. And they think the answer is no. 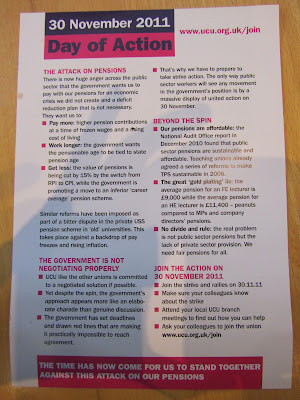 This is what it's all about
There were strikes all over the country. I didn't strike; firstly, I'm not a member of a union, so I'm not even allowed. Secondly; I haven't bothered to form an opinion on government policy on that front, so I can't say if I agree with it. And thirdly; I'm always sceptical when there clearly is a need for belts need to be tightened, and people flock to the streets to argue it should be someone else, not them, who carry the burden. And there is, of course, a fourthly; if I strike I only have myself with that. Will the government really change its way if they realise that otherwise a few forams don't get counted? Of course not. Do I care about these counted forams? Hell yeah!

So on Wednesday I was an official scab. I wondered if I should go to the picket line and get beaten up; I have vague memories of the famous miners' strikes in the 80's, so I sort of think that's the proper English way. But I did no such thing. And I think a handful of academics are less likely to be willing to grant you such experience than hordes of furious miners. 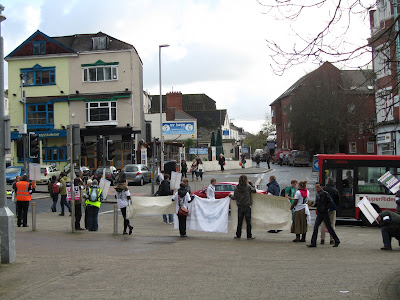 The university picket line, seen from behind
During lunch, one of my colleagues explained he would lose out on £200.000 worth of persions. That sure sounds disproportional. Still, he had voted against a strike. He figured that way you make the wrong people suffer: the students. I feel sympathy for this. On the 10 o'clock news they interviewed a protester: he was striking because he would lose out on £1000 a year worth of pensions. That's less than £100 a month! That's exactly what I have against such protests: there really is less money to go around; live with it. Do your part.

I don't know if it's the right thing to not be a union member and find out what's really going on. But if not I'll just live with that. I have forams to count, after all...
Posted by Margot at 08:53