Does a bear shit in the woods?

What seems evident to most can be an interesting research question to a scientist. The obvious is often untrue; those who watch QI will get a regular taste of how much we think we know but don't. And whether bears shit in the woods does contain at least one interesting scientific question.

Having become Quite Interested in the underground realm I subscribed to "Cave and Karst Science". In it I found an article called "Fish remains in cave deposits; how did they get there?*" It warned against unfounded assumptions, apparently common in archaeology and palaeo-anthropology, that fish only end up in caves** due to human actions, and fish remains thus prove human use of the cavern they are found in.

The authors rightly point out that there are more cave-using fish-eaters; eagles and bears are only a few examples. Concerning bears, they mention that many studies exist on fish eating by bears, but generally with a focus on something like the impact on fish abundance, which is of limited archaeological interest. The authors go on: "For example, the studies often list in detail how many salmon were taken on certain days, but not what parts of the fish were eaten, where the remains were deposited, or where the bear defecated afterwards - all important information for archaeological research. "

Does a bear shit in the woods, or sometimes also in a cave? Who's going to write the research proposal... 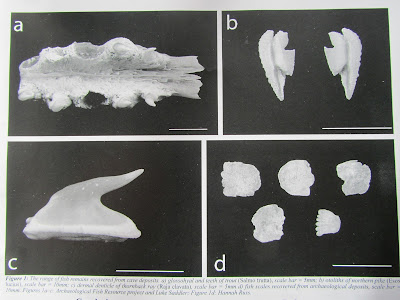 Fish remains. Figure taken from mentioned article (full reference below)
*Russ, H and Jones, A.K.G: Fish remains in cave deposits; how did they get there? Cave and Karst Science 38(3), 117-120
**this, of course, only applies in caves where fish do not naturally occur, as they may do in e. g. sea caves