There's even Belgians in the Belgian government! Unbelievable. Here in Plymouth I had only met one: Tony the robotics lecturer. I even mentioned that this week to an Australian historian I met, who turned out to study the cultural identity of the Belgians. Or lack thereof, as a PhD student at Delaware University remarked.

I was in the lab, doing my thing, when two gentlemen unbeknown to me were doing some analysis on sand. I listened to them for a while, and figured one was French and the other American. Though I realised I’m crap at recognising accents; they might as well have been two Canadians. It turned out they were two PhD students: one local one, and the other one, you guessed it, visiting from Delaware University. But then we started chatting; soon it turned out the Frenchman was actually Portuguese, and the American was… Belgian. He lived in the US, though, so he sounded proper yankee. But as soon as the Portuguese left he switched to Flemish. Lovely!

He, by the way, announced I was a real Dutch girl; when he explained where he was from he mentioned Lille, or Rijsel as the Flemish call it. And he wondered if I had heard of it. Of course I had! They make Oude Rijsel there, also known as Vieux Lille. And making such a cheese reference will do just fine for nationality stereotyping. He was so kind as to say “amaai” or “allez” in every single sentence…

Anyway. It was good to meet a rare Belgian. But later in my office I went to the university webpage, and whose face was adorning the front? Tony the robotics lecturer! Now there’s none to be seen, now they’re everywhere… 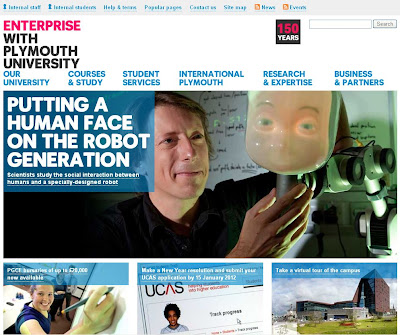 The front page of the University Website last week
Posted by Margot at 08:30