I was digging endless amounts of loose rubble in a confined space and realised not everybody would consider that a good way of spending one’s free Sunday afternoon. But I had a blast!

This day would turn out to be the end of an endeavour that started about a year and a half ago. One summer evening we went on a search for a mine shaft, and found it, amidst all brambles and hollies and other unwelcoming vegetation. That autumn we went back to descend that shaft. We found a little beauty of a mine! With a collapse at one end that looked promising. So in early spring we went back to see if we could dig through that collapse. We managed to displace loads of loose rubble, but there was always more. And now we were back to continue our efforts.

I parked my car, got out, and was immediately flagged down by the landowners. We had their permission, but they didn’t know we had picked just this day for our endeavour. But they greeted it! They asked me if we knew where we could come out if we would manage to indeed reach the surface. Lionel wasn’t there yet, so I just showed them. The last time we had searched for a possible link to the surface, and we had found a pit of sorts that looked plausible. The land owner hoped he could indeed walk in there later that day. It would not be!

When we walked back Lionel appeared. And after some more chatting we got geared up and went to rig the shaft. On our way to it we found another pit of sorts; maybe we had been mistaken, and this would be where our dig would reach the surface! If so that would be bad news. There would be metres of rubble above us.

We were not discouraged and rigged that shaft. We are getting experienced at this. I went down, only to have to wait for Lionel who did an unusual amount of faffing before coming down. I spent some dreamy minutes lying on my belly in the entrance to the shaft, tens of metres below the surface, where it was all quiet and some raindrops only accentuated the stillness, while above me the wind chastised the trees. But then Lionel touched down. And off to the dig we went!

We knew the procedure: an upward-sloping tunnel would end in a narrow bit, with up, down, left and right solid rock, and forward loose rubble. Dig some of that out and more comes down. Like uncontrollable diarrhoea, as Lionel unhelpfully commented. Just shovel that back until it falls down a flooded winze and dig some more out. Repeat ad infinitum. 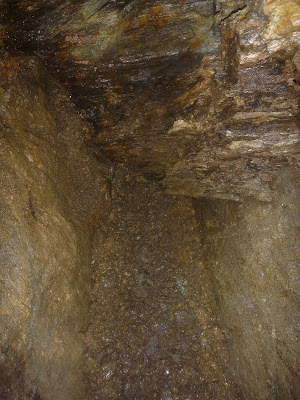 Not a very clear picture, but this is what it was all about: the opening through which the rubble kept steaming out.
So that’s what we did. Within minutes we had fogged up the narrow space with our breath. Sweat was dripping down our faces. We would take turns in digging at the front; the role of the one in the back was shovelling the rubble into the winze. We were a bit reluctant to do that, as blocking the winze might stop that tunnel from draining, and then you can have a problem, but there was nowhere else to put it.

We had some dubious fun. Our method was raking rubble towards us until we could get behind it, and then lie down and push it further with our feet. These are good bulldozery things! And bigger rocks you throw down. At the best of times you thus end up sweaty and with rubble in your shoes, under your knee pads, and under your watch. And it got worse: Lionel couldn’t possibly be bothered to look where he was throwing and bulldozering things, so he would sometimes throw the rocks at me and bulldozer the rubble not into the winze but into my boiler suit. When I got home and undressed to take a shower I found half the mine in my bra! Thanks Lionel. 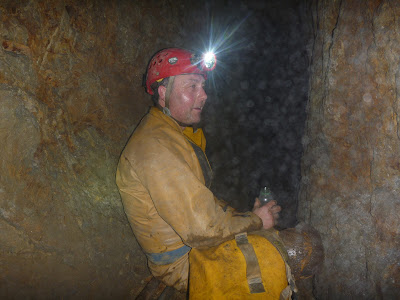 A sweaty Lionel enjoying a break
One of the highlights was finding a piece of unidentified pottery amidst the pebbles. Another was the creating large rockslides into the winze, see it rush down, and listen to the thunder it created by reaching the water. A not quite highlight was that I once managed to have a rockslide cover my shovel… luckily I found it back.

After a few hours, and a small wander in the rest of the mine by means of break, we called it a day. Lionel insisted of using a brought metal pole for clambering laboriously over another winze, where we also had been the previous time but which he had forgotten, only to find yet again a dead end not far behind it. And then we went out! I went up the rope first. I hadn’t done enough arm muscle training recently! But I got up safely. And then my job was to pull up that metal bar. How did I get talked into that? Lionel is much stronger! After hours of digging and then prussicking up that shaft my arm muscles had surely done enough. I was very relieved to see the top of the pole peek over the top of the shaft. Next thing was Lionel coming up, and then we together hoisted our luggage up. I would have really struggled to do that myself! 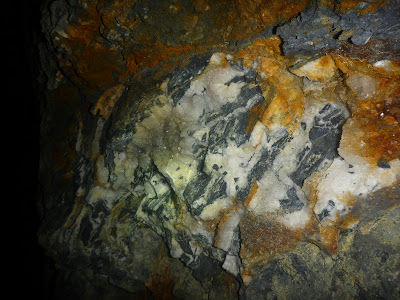 Clear evidence mineral collectors come down here too! But without permission, the rascals...
We de-rigged in a jiffy, and then went to look for our pit. The second one we had found, higher on the slope. Lo and behold; it was much deeper! This was the surface depression we had created with our digging. And the whole area around our pit also consisted of loose rubble. No way we could reasonably dig our way out of that! Too bad. At least we had had fun.

While discussing what other collapses we might have a go at in this mine we walked back to the cars. I had a social engagement to rush to so I just changed and left. Lionel provided some bonus entertainment: as it had been raining the long grass was wet. So he crawled and rolled around in it for a while in order to clean up… whoever thinks I’m daft: look at Lionel and realise it could be much worse! And daft or not: I hope we’ll be back down there one day, trying our strength at another dig. Maybe we can get into the part of the mine on the other side of the road!
Posted by Margot at 17:18