21st century: getting there!

If you try to impress people with a new trick, make sure that it works! I wanted to show off my new phone to Tasha, but I had only charged it before heading off to Oxford, and not activated it, so that didn't work. On my return I found that when the phone asks you to connect it to iTunes it isn't joking; without that nothing will happen! Nonsense. Why would you have to stick your telephone in a radio before you can make a phone call? But if that's what it takes...

So then I had a working phone. That evening I had a phone with my old number. We were getting somewhere. And before I could possibly get as destructive with it as I am with my cameras I added a screen protector - I think I need that.

Neil had spent months moaning that I should get me a smartphone so we could exchange pictures without using email, so I figured next I'd try to impress him. And sent him a text with an image.

I touched the wrong button, so my first message only read "s". A cryptic message if there ever was one! And then the phone refused to send the attached message. So one can imagine how impressed Neil was. "Find a man and ask for help!" I found some men, but none that could resolve that issue. I did find one, though, that spontaneously set up my email on my phone. (Thanks Paul!)

A few days later, after having consulted the manual which claimed it should just work, I gave it another try. And now it worked! Neil still wasn't impressed though. I had just sent a rather boring picture, taken in the mirror, of me with the phone. His response: "Freak!"

So the impressing wasn't getting anywhere, but the phone evidently worked. More people to impress! I decided to send Jon, who has an iPhone himself. And who, togteher with Tasha, was one of the main inspirators to this move. His response on my announcement of a picture: "Cool! Will you send it by text or email?" Oi! It already sat proudly in  my outbox. So why hadn't it reached him? 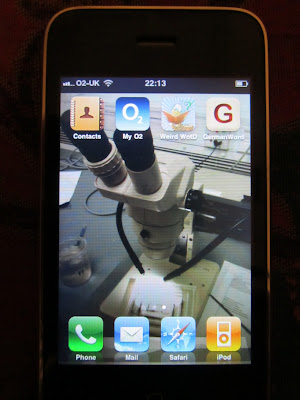 See! Three apps! I'm using that phone to the max...
I don't think I'm born for modern electronics. But I sure now can pick up my email at random places. And when I wonder about an exotic word I can look it up, even if there is no dictionary anywhere near!  I've even personalised my phone with a wallpaper. And I installed three apps already; one that gives me information on the account I have with my phone provider (boring!) and two words of the day. So though it's slow, creaking, faltering progress, I'm sure turning into a modern, communicating citizen!
Posted by Margot at 09:05