The thing with people being missing is that you tend to not know where they are. So one could picture a call-out to find someone of whom it is not known if they reside above or below the surface. And in that case, it may be a good idea to have both above- and below-ground rescue teams involved in the search. And it’s best if they have practiced collaborating. And that’s what the plan for my birthday was.


We drove to a parking lot in the woods that was packed with big vans and SUV’s with lots of reflection and phrases such as “mountain rescue” and “ambulance” plastered all over them. These Dartmoor rescuers have the stuff! I got into my very muddy kit and waited for things to happen. Dartmoor rescue was in charge of this exercise. 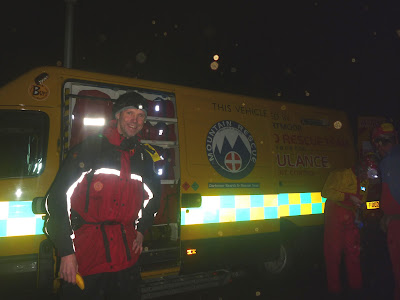 Big rescue van with well-prepared banana-carrying rescuer!
We cave rescuers had just gotten new jackets (which we paid for ourselves, worried taxpayers! Though we did get a discount as it was a bulk order), and several members had realised that it was my birthday, so now a few of these shiny new garments aren’t so shiny anymore.

Teams were made with members of each team, and after some more faffing we were off. There was no briefing, but it became clear that the idea was each team would search a number of mine entrances, and once we would find the victims, which were assumed to be underground, cave rescue would get them out and mountain rescue would take them over at the surface. Each team had a caver that knew the area well and would be able to find the mine entrances; in our case that was Richard. So he lead the way.

We were supposed to search what was called adit 8 and 9. To get there, one gets past adit 7. This one was unlocked, and there were bags at the entrance. To me that indicated another team was in there. But the Dartmoor guys figured it meant the victims were in there, so they wanted to contact base to see if we should change our plan. Unfortunately, radio contact was hampered, so we just stood around for a while. Hmm! 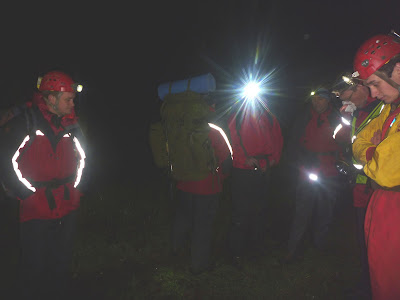 Seemingly unavoidable in rescuing: standing around
In the end we got through to base, moved to the next adit; it was locked and the water in it was clear, so there was likely nobody in there. We were only in it for some tens of metres when we were called back; the next adit was unlocked! So we checked that one out first. Nobody there. We locked it behind us, in spite of Dartmoor rescue objecting; they figured that if someone was in there after all, they could get out. They had no idea that there’s nowhere to hide in there.

When we got out there was news: the victims were found in another adit, so we went there. The scenario was two people had gone in; the guy had crossed an unstable winze, dislodged something, and fallen on his head and passed out. The girl was unhurt on this side of the winze, but she was quite distressed. One of the mountain rescuers took it upon himself to talk the girl back to base, so we could concentrate on the unconscious bloke. Base had been informed a stretcher and rope was needed, so that was on its way. I went in with one of my team mates to inform the casualty carer who was looking after the victim to tell him that (OK; that was a lame excuse. We wanted to get in! But that was a good idea; that way we would get an idea of the terrain between the exit and the hapless chap), and happily crossed the aforementioned winze. There were some dodgy looking planks over it, and a solid metal pipe. We didn’t really take much time to behold it; we wanted to get to the victim! But on the way back we had a closer look; it was an unfathomable depth! We decided to leave the planks and cross using the more solid pipe. How would we get the victim over that?

Soon the stretcher arrived. I put it on my back to carry it in. Richard advised me against that; it’s too high and would hit the ceiling. But I had a small moment of triumph; it would hit the ceiling if carried by a tall lad like Richard. Not if it’s me! So we carried it in, and started getting the victim all packed up nicely. 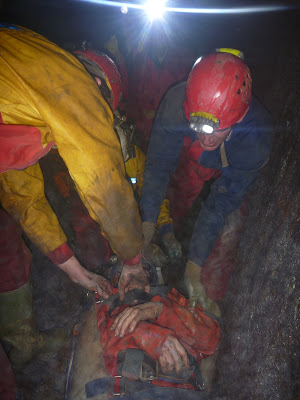 Turning the victim into a muddy christmas present
The evacuation started smoothly; the tunnel was wide and the ground solid. Until we reached the winze… we came up with a plan: two people sit on the pipe, attached to it so a fall wouldn’t be fatal, and then we would pull and slide the stretcher over their laps. I was one of the sitting people. An honourable job! And it worked a treat. These are the cherries on the rescue practice cake!

The next problem was a very narrow bit. Just big enough for one person at each end of the stretcher… that’s heavy. Later we also had to slide him over the ground as the ceiling was so low one could only crawl. And then we were out! We briefed their first aider on what had happened and off they were. The mountain guys have a splendid stretcher-thingy on a big sturdy wheel which is good for transporting casualties over uneven terrain without having to carry them all the way.

By then it was late. We had a brief debriefing, and then we absconded. I hoped we would go to the pub, but it was already 11. The pub Dave tried anyway was indeed closing. Too bad. Not a birthday drink! Nor a more thorough and informal evaluation in the pub. Especially with this combined training that would have been good. But what can one do... and it had been a good night anyway!
Posted by Margot at 14:41