...and they lived happily ever after! Sometimes I like happy endings. Where they get each other. And me and Rob just did. All the necessary signatures are on the form! It's official. I'm now his fourth supervisor...

How did that happen? Rob had three: Roland, Wil and Dan, who hasn't featured so much on this blog. Dan went to Exeter around the time I came to Plymouth. He is a specialist in testate amoebae. Rob's PhD is on using foraminifera (Roland) and testate amoebae (Dan) as sea level indicators in Norwegian sediments. Roland is the man who has the overview. And I'm in the lab a lot.

I don't know anything about testates. But most other things Rob works with I have done before. So often he asks practical things. Or even things concerning planning or fieldwork and such things. And often I stick my nose in on my own initiative. I'm often just curious what he does, but quite often I have something useful to comment when I see him doing things. I might ask things such as "why do you take such large samples? Wouldn't you want to label the lids of these sample containers too? Have you seen this paper?"

And then there's foram taxonomy. There's thousands of different species. And the lab has a really limited reference collection, a very limited library, and no access to the online foram encyclopaedia. So learning these all in that lab is very tricky, and two know more than one. So I often try to help. On top of all that I went with Rob on fieldwork. 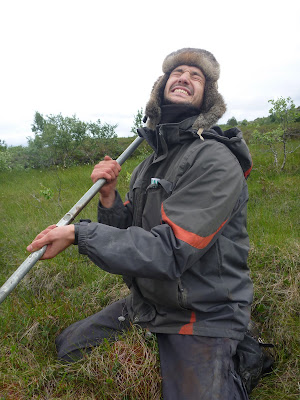 Rob in the field
Then Hugh appeared on the scene. He is one of these people who has a sharp eye for career boosting. He noticed I was investing quite some energy, but other people would get the credits. But not on his shift! He kicked me in the arse, saying I should discuss this with Rob; maybe I could be added to the list of supervisors. So I did. And Rob greeted the idea with enthusiasm. My next step was talk to Roland; nothing moves in such fields unless he wills it. And he thought it was a great idea too! We weren't sure if it would be in line with university policy; maybe it would be too late. Maybe one can only have three supervisors. At some universities one can only have a PhD student while having a permanent contract oneself, but we knew that wasn't the case here; Wil is only a postdoc as well. But with the remaining questions I went to the Graduate School Research Administrator, who got back to me within minutes with the news that there was no objection to such procedure. And today I got the email confirming all paperwork had been done, and it was official! I have a PhD student, and not just any!

I love Rob to bits; I think he's most splendid. We get on like a house on fire. And he's dedicated and smart, so any supervision will be but a pleasure. I'm chuffed! And now I'll have to try not to take myself too seriously. Even though on Facebook our Spanish PhD student already announced she wants me too, either as a supervisor, or an internal examiner! Blimey. If you're looking for me: I'm somewhere in a central place, looking quite satisfied with myself! And with my marvellous student. Prepare to be amazed while we conquer the world!
Posted by Margot at 17:20