Yes, I know, another race. Yet again without horizontal sleet! But we did get some hail along the way. This year’s quite unlike the previous: deep into December there’s still no sign of winter. So the Torrington Christmas Caper wasn’t excessively Christmassy either, but yet again, it was fun. And yet again, it was an off-road race, so my results were shit. Even shittier than the Drogo results!

I had my running mate Hugh back, and this time I would turn out to manage to keep up with him for several minutes, so I even noticed. When we arrived at the venue we were struck by the large number of dressed up people, which made it a bit Christmassy after all, in spite of the weather.

This run, which covered 10.2 miles of north Devon countryside, was sure one of extremes. It started on the road, and there were rather large parts on the road this time, allowing me to run more than 10 km/h on average, but it also had unprecedentedly rough bits. Soon after we left the road there was a flooded bit; at the deepest the water came up to my crotch! One does not go very fast in that. And one’s muscles are a bit cold after it, which enhances sore muscles the day after. And there were plenty of very, very muddy bits. 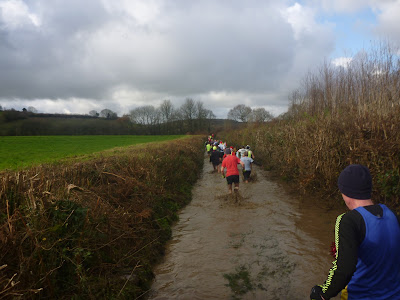 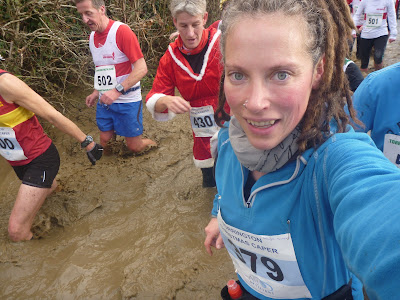 It would even get deeper than this!
At some point I was running on a small track next to a properly sized forest track. The latter had big puddles in it, and one can’t see what’s in them, which may be a hole for instance, in which an ankle is easily twisted, so I tend to avoid these. But behind me I heard a runner approach, then I heard “excuse me!” and then “WHEEEEE!” “SPLASH!”. Some people like their puddles… 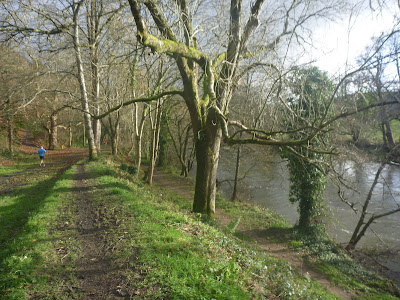 A race of extremes; one moment you're running through scenic wooded lanes... 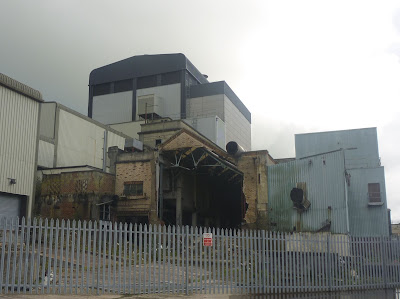 ...the next moment you're running through derelict industrial complexes!
It was a nice run, with a nasty ending after some very swampy meadows. I had read a review of an earlier edition, where they mentioned these very fields, and that they have patches of knee deep swamp in them. I didn’t really believe that. Until I went down into one, over the knee! It was true… 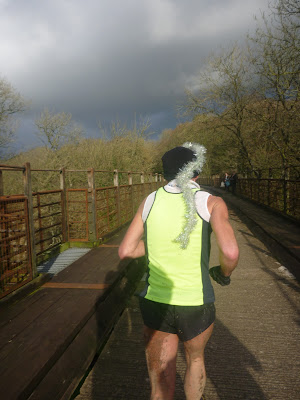 The winter sun on tinsel garlands enhances the experience
After just over 1.5 hours I crossed the finish. I received the trophy: a small Christmas pudding with clotted cream! And then it was time to check out the excellent facilities of this race; headquarters were a rugby club, so there were showers, and the possibility of purchasing a hot beverage. Both were welcomed; we would proceed from the race straight to a Christmas celebration at Gerd the Coastal Professor’s place, so we had to get that inch of mud from our bodies, and change into a befitting outfit. And it was a rather cold day, so a post-shower hot chocolate was most appreciated. 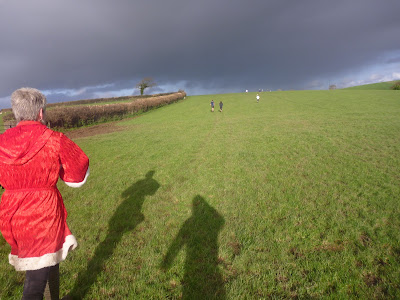 Running in the sun under a lead-grey sky. Notice "Santa" is still at my side; she already was on pic #2! 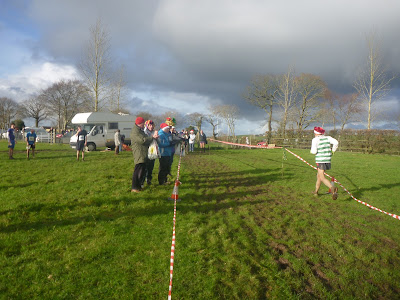 The muddy finish
I would have stiff calves for days, and had to accept I had never performed so poorly, but I couldn’t wait to register for another race!
Posted by Margot at 11:35