The first days of November I attended a course on age modelling. In the second week of November we received our radiocarbon dates. What does that mean? Work! Lots of it.

I am responsible for 4 of the 6 sites in our project. That sounds unfair, but mind you; three of these are sites Roland has already worked on, so we’re not starting from scratch. And of these four sites, two already had quite an age model; the other two were clean slates. So for these sites, suddenly things got meaning! It was very exciting. But a lot of work, too.

We date our sediments with what we can find. In practice that means we have radiogenic lead and radiocarbon dates for all cores, and for some we have extra age points such as a well-dated change in the pollen, or a datable volcanic ash layer, or such things. The pollen and the ash are quite straightforward. The lead requires some elaborate modelling. And the radiocarbon takes even more elaborate modelling.

The simple idea with radiocarbon dating is that the sun bombards the atmosphere with radiation, which blasts neutrons out of nitrogen atoms, which then change into 14C. This spreads through the atmosphere. It doesn’t last; it has a half-life of 5568 years. But they’re constantly being resupplied so the atmosphere doesn’t run out. And all that is in equilibrium with the atmosphere, such as us, gets replenished as well. Carbon-containing bodies that stop equilibrating, or in other words: breathing, will stop replenishing their 14C, and eventually run out. So if you find such a body, be it a shell, a bone, an entire mammoth, a fossilised leaf, a piece of wood; if you check its 14C concentration you know how long ago it died. So that’s how it works! 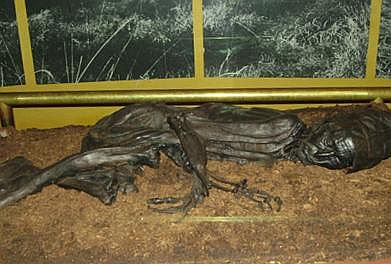 Something one could date: Tollund man!
That evidently was the easy version. In real life it’s more complicated. Because it’s true that 14C gets replenished, but unfortunately not at a really constant rate. So if you get your 14C concentration, or in other words: your 14C age, you have to hurl that through a calibration curve which represents the changes in 14C creation speed, and only then do you get your actual age, also known as calendar age.

If you look at that calibration curve from a distance it looks like straight line. But if you come closer, and zoom in to the last, say, 500 years, you’ll see the curve is all over the place. With the problem that a certain 14C age can intersect with the curve at several places, each with their own calendar age. So which one to pick? Stratigraphic position (simply said: deeper is older) helps here. But sometimes you have a whole array of dates that are all the same, simply because the calibration curve there is just flat-lining. Unpleasant! And sometimes your samples are contaminated or have ended up at the wrong stratigraphic depth. Think of a root growing down, or some burrowing critter that eats stuff at one level and shits it out at another. All sorts of things can complicate matters! And that’s why I’m working at strange hours, trying to make sense of it all. I’m tired, but it is damn interesting! 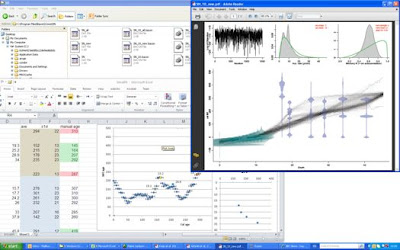 What my monitor displays these days. It's a bit blurred on purpose; these are unpublished data! But notice the fuzzy age modelling graph, and in the background the bumpy shape of the 14C calibration curve. If only that was a straight line!
Posted by Margot at 19:55