“Don’t get bogged down in the marsh work!” Whether that was a witty comment or not I’ll leave to the readers, but it sure was the concluding remark of the iGlass kick-off meeting. Some may think iGlass is one of the newer Apple products; it seems there once was an April Fool’s day spoof claiming Apple had indeed produced some sort of cyber-glasses. And there's more of such to be found; no idea if they're real, but there seems to be an iGlasses app that distorts images, and there are iGlasses for the blind, with obstacle detecton... But in this context it’s a big scientific consortium aiming at studying interglacial sea level. The familiar team of Roland, Antony, Tasha and me is involved in that; we’ll try to find interglacial salt marsh sediments to which we can apply our usual method of sea-level reconstruction. And apart from us there are speleothem specialists, ice modellers, isostatic adjustment specialists, coral specialists, and whatnot involved, with the thought that all together we’d be best able to find out what sea level is capable of in interglacial times. 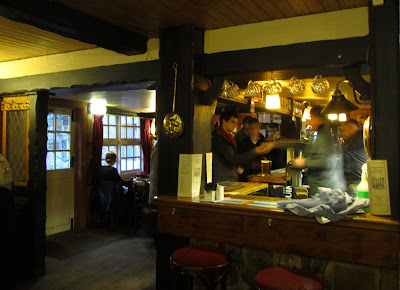 The Oxford pub where we had a swift post-meeting half
Why does it matter? We are in an interglacial, sea levels are rising, lots of people live pretty close to sea level, and we want to know what we’re up for. That’s the short version. And if we know how much and how fast sea level has been changing in past, comparable periods, this will give us an idea. Policy makers are quite interested in what they need to base their adaptation policies on. We have some of these in the project, too... if you know within what range the changes will be, you might know whether you can get by with strengthening your defences, or whether it’s time to start building whole new ones. Or perhaps plan a retreat, as defence isn’t economically feasible.

In January we heard the project had been funded. In July it officially started, but most employees started later than that. So by now we all (well, most of us) met for the first time. As colleagues, that is; the community is small, and most people saw many familiar faces around the table.

So what did we do? We had to mainly go through the not-so-exiting non-scientific details, such as: how do we organise ourselves, how and when do we report back to the project coordinator, who takes which decisions, what do we do when things go wrong, how do we make our publications recognisable as iGlass productions, etc etc. It has to be done...

For us, the swamp squad, the project has started with site selection. We need old sediments, and these are harder to find than young sediments. We did quite a literature search, but that’s not enough; if you find a description of interesting sediments, but you consecutively find out someone has built a chemical plant on them, they suddenly cease being interesting. We hope to do the first reconnaissance fieldworks in January. And a big, proper one around Easter. And then we’re go! It will be a fascinating project to be part of...
Posted by Margot at 20:11