Dangle your colleagues from a rope

Once you do down a mine you can easily get hooked. It happened to me! And the next victim is Hugh. I dragged him down a Tamar mine as I figured he should know what he’s talking about; he works on mine pollution in the Tamar valley. But soon his interest proceeded beyond the scientific, and he wanted to try SRT. And that’s a bit of a bugger. The club nowadays has two sets of SRT kit, but these are for training purposes only, and we haven’t had a training session for yonks. We don’t lend them out, as experience seems to prove you get them back soaked in corrosive liquids. And I have one set, but if he wears it I can’t come along to keep an eye on things. And sharing a set can be both time-consuming and dangerous. So that was a bit of a difficult one! But then the Cornish came up with a splendid trip, tailored for such circumstances. A trip down a mine with both horizontal and vertical access, and several other SRT novices using the occasion for practice. Perfect! I would just give him my stuff and use the horizontal entrance myself. Mark had promised me an underground lake, so I wouldn’t have to be bored.

When we got to the site, it turned out Mark had brought several spare SRT kits. In Cornwall they do lend them out! So even though I’d already donned my wetsuit I now could go in through the shaft myself as well. So we rigged the shaft while the horizontal people vanished into the direction of the adit, which would provide walk-in access. Mark talked Hugh through the kit; quite splendid as one should learn from the best, and besides that; he had borrowed a caving harness with a rack, while I cave in a combination harness with a stop, so I’m really not the one to listen to when it comes to such things. 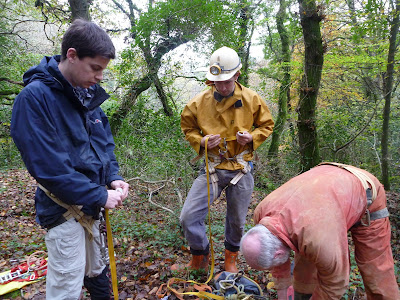 Mark showing Tom and Hugh how to get into a caving harness
I went down with Mark’s son. Or at least: I tried. I was the only one going down on a stop, while the rest had racks; the idea of a stop is that it’s not adjustable, but if you don’t push the lever the device is supposed to stop your descent. Hence the name. The idea behind that is that if, for instance, a rock falls on your head and you lose consciousness, you won’t add to that already unfortunate situation by getting into free fall, and hurtling to the ground. A rack doesn’t have that safety feature, but by being adjustable you can just use lots of friction when you’re scared such a thing might happen. But if you just want to get down smoothly, you reduce the friction. I didn’t have that option. And the rope was quite thick. I had to struggle to get down. I was just not heavy enough! Very annoying. All the others sailed down with their racks. I think I know which device Hugh will choose…


While Tom and I were waiting for the next lot we did a little recce. One tunnel was had a dead end. One lead to daylight; it looked like you could possibly scramble back to the surface! One tunnel ended, but had a drop down that might lead somewhere. So when we were all down we explored that only chance: the drop down. The rope was long enough for both descents! But then we came to another drop after only a few metres. Luckily Mark had another short piece of rope that was just enough. This was much smoother rope, though; I loved it, for I actually managed to descend along it. Hugh simply tarzanned down. He seems to think a rack is solely for low-friction use… 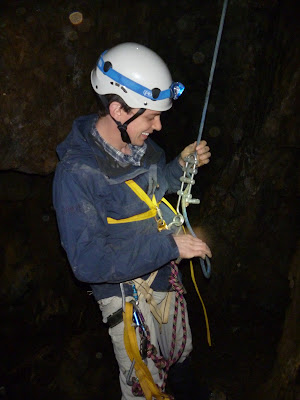 Hugh had come down so fast I couldn't possibly take a picture of it
Down there we found two dead ends, and two tunnels leading to the same water body. Water! I wanted some after all the sweating in my wetsuit. And I heard the voices of the other group. They turned out to be on the other side of the water. The only way to get from our to their side was swimming, and then climbing up a smooth incline. I didn’t even bother! Let alone the rest, who weren’t wearing wetsuits.

We went back and checked the scramble to the surface. We decided it was too dangerous, so we all went up the shaft as well. A first time for me in a wetsuit I think; it actually didn’t bother me! Which is good. While waiting for the last ones to come up we had a bit of a walk around, and we found another open shaft. Maybe for next time? 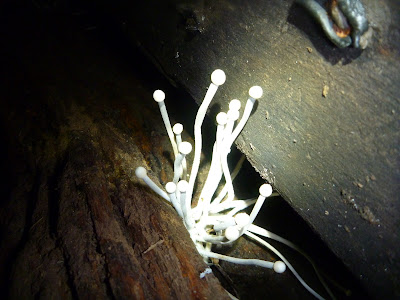 A pretty underground fungus
We went to go and have a look at the other entrance too; we went down a hole inside a very impressive quarry, which had a bit of an uncomfortable descent. And below it only water waited. That was a bit of a bummer! Hugh had a big hole in his leg (which doesn’t stop him from doing wild SRT) which he shouldn’t get wet. So that wasn’t an option. So we basically just all clambered up again and got out. And it shouldn’t have been any later; Hugh had social engagements to attend to. We had to be on our way! But it had been a great day; nice rope work, nice exploration, and a swim. What more does one want on one’s Sunday! 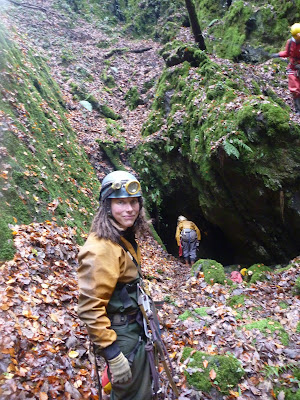