It sounds so simple. Have something you want to know the age of? Radiocarbon dating has the answer! If it's organic it has carbon atoms in it and you can date it. For us swamp scientists that should be a piece of cake since swamps are full of organic material.

As everything in science, it isn't that easy. What you date is the moment that organic material, or its associated organism, died. And if you want to date a sedimentary sequence, you therefore have to make sure the material died at the same time as the sediment layer you have plucked it out of was deposited. And that can go wrong in several ways.

One thing that can go wrong is that the material does not belong at that level in the sequence. If a beetle burrows down into the mud, and dies there at 20cm depth, it will not reflect the age of these 20 cm deep sediments. The same with roots. They grow down from the surface, and might have died by your hand while embedded in, say, 2000 year old sediments. 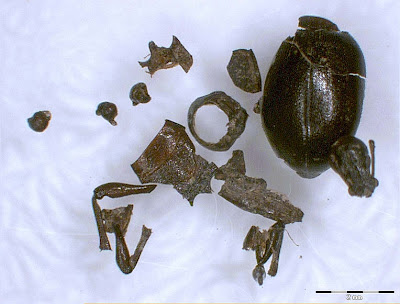 A non-burrowing weevil we found in the Icelandic sediments. We didn't date it, though...
The other problem that needs to be avoided is dating material that has been lying around dead for yonks before it ended up in your sediments. That will not happen so often with fragile stuff as leaves of beetle shields or the likes, but with shells (organic calcite!) it is quite probable.

I have done the 14C dating for our Icelandic sediments. Or rather, I found good samples and sent them to the NERC radiocarbon facility. But there's more work to do. Something went wrong with dating the core from the Isle of Wight; we probably accidentally dated too-modern roots in spite of our efforts not to. And I have to find samples for our sites in Maine, Connecticut and Nova Scotia. Nova Scotia, by the way, we did not go to; Roland had some cores lying around, but it's me who has to root through them. And Durham figured I should have a try at the Isle of Wight material. All in all I have some three meters of core kicking about to pick through. And if you know how precise and careful you have to be to make sure you find everything that's there you know how bloody much that is. And Rob is trying to find stuff to date his Norwegian material. 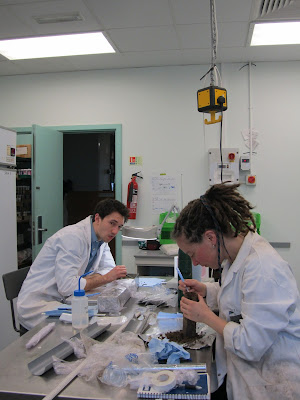 So there we are. My core is very organic, but it's almost all roots, so I sit there for hours without finding anything. And Rob's core has little organic stuff in it; mainly roots (no!) and shell fragments (no again!) so he finds even less. His face says it all on the picture. It's good we are in this together, for this can get fairly tedious. But if we find enough for our purposes in the end it'll all have been worth it!
Posted by Margot at 09:11

Hours of work and no guarantee for success? I can imagine the frustration. Still you're looking pretty patient and full of expectations while Rob looks like he's about to throw something out of the a window (that, or it's your turn to get coffee).

In the end I found quite a lot! But some intervals in that core just yield bugger all. But Rob hasn't found a thing. And that's probably the reason for his expression. It's not that he wants me to get him a coffee; the strange bloke doesn't drink the stuff (the horror!)! But if I didn't I'd look like that all the time...