Everything can be approached from a nerdy perspective. Running, too! To the extent it scares people away from the lunch table (believe me!).

When I saw Pete again on the Monday after the Plymouth 10K he said “well aren’t you the success story!” Ad I had no idea what he was talking about. He and Hugh had beaten me by 2.5 minutes! How is that a success. But he mentioned my ranking within my age/gender category. I hadn’t noticed that, but well, it sounded like I had done well. So of course I immediately looked it up: indeed; I had come 7th out of 79 in the category women 35-39. Not bad!

Having figured that out I had a look at my older race results. All were categorized as well… and I never had done as well as in the Plymouth 10k! I might not run comfortably, but I seem to be outrunning more and more of my peers… that’s something at least. And now I will have to admit that I, too, was perhaps being falsely modest. Hmm! 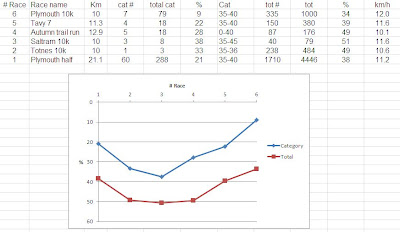 Something struck me as odd when I looked at my results; my worst ranking had been in the Saltram 10K, which was the race in which I felt the fastest! And the Plymouth one didn’t feel the slowest (the Tavy 7 and Totnes 10 felt worse), but it surely didn’t feel as good as it looked on paper. Strange! I don’t know what that means. But now I have a nerdy graph, and I’m already looking forward to my next race, if only to be able to plot an extra data point! Maybe I’ll wear glasses that have been taped together in the middle, and a lab coat with lots of pens in the pocket… I’m now officially a nerd runner!
Posted by Margot at 10:19