When we’re on fieldwork, Tasha always solves any problem we might have with her iPhone. When we’re at a conference or something, in a town none of us have visited before, she can still find any restaurant of choice. With her iPhone. When one day my satnav was trying to take me to Exeter instead of home, Neil saved the day. With his iPhone. When Jon is in a pub thoroughly enjoying his pint, and he still has to take a train home, his iPhone will tell him if his train is delayed, sometimes allowing him to have an extra pint, instead of freezing his behind off on a windy platform. And he can also answer all sorts of questions on German vocabulary with it. I used Tasha’s iPhone to phone my mum for her birthday, when I happened to be in the USA on that day. Mine won’t allow such behaviour.
All that might illustrate the point that I had started to warm to the idea of smart phones. One day I got an SMS from the shop where I’d bought my very basic Nokia; I was eligible for some discount on a smartphone. I went to check it out, but that turned out to be an error. I wasn’t eligible at all! I thought to myself I’d go and buy one, discount or not, mañana, but evidently, that day never came. Until I got another one of these messages. And I had to be near that shop anyway, so on a late Saturday morning I popped in to see if this time they were serious.

They were! They could offer me an iPhone 3G for only marginally more money than I currently pay with my pay-as-you-go Dickensian mobile. So I went for it… And so far I've not managed to get past charging it; it's not even activated yet. But my days as a luddite are practically over. I’ve joined the hordes of iPhoners! Who would have thought. And that's much more dramatic than getting myself an iPod, which shook me as well, back in the days. And real 21st century dwellers probably now all have a 4G, but hey, by my standards I’ve already made quite a leap… 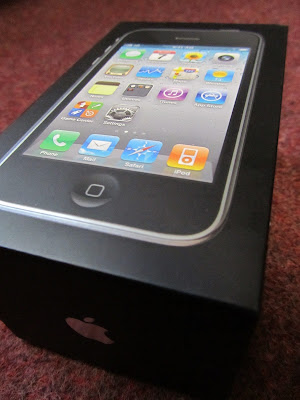