Remember, remember, the 6th of November… How many of my readers would now think “that’s wrong; it’s the 5th”? I am indeed referring to Guy Fawkes Night (hence the title of this posting!). But I would not celebrate excessively. Not one catholic would I burn! Not even an effigy. No toffee apple passed my lips.

On November the 6th, at 8:15AM, the horn would sound to indicate the start of the Plymouth 10K. 8:15 is early. And I’m not a very good runner in the morning. This would get hard. So when I got the invitation for a Guy Fawkes party the 5th I knew I would not party hard. And not only would I have to deliver very early the next day; the day itself I had properly worn myself out by exposing my already quite exhausted body to a 5.45AM start due to an early caving trip. So the party started at 7PM; by that time I was ripe for bed, but I was so honoured by the invitation I dragged myself to the party anyway.

Richard, one of our lab technicians, and his housemate Vince had invited me and countless many others for a night of food, drink and firework. When I rang the doorbell I heard a dog go mad; this told me it was the right house, as Rich had already told me a charming bitch he often looks after would be there too. And I only came in shortly after 7, but I wasn’t the first, and before I could have taken off my coat scores of other people came in. By 7:30 it was decidedly crowded!

None of the early comers was familiar to me, but I soon found out Rich and Vince tend to invite very accessible people, that will socialise with you even when they’ve never met you before. This would be a splendid party!

Richard charmed me into having a small bottle of beer with 2.6% alcohol; this was the only toxin I would imbibe all evening. How uncharacteristic. And when I saw the enormous effort they had made on all aspects of the party I felt quite guilty for my intention to leave so early. But my fatigue was stronger than my guilt…

A lot of guests had brought firework, so even before 8 they started lighting it. It was a beautifully clear, firework-friendly evening. The guys who lit them (I think no women were involved) didn’t take full advantage of that, though; they managed to let some fall over and launch themselves horizontally, and on this dry night like this that did lead to a heavily symbolic burning bush. Fortunately, that was the most severe damage done, which is not always the case with horizontal fireworks.

I had given myself a 9PM curfew; I started to make my way back to my bike a bit earlier, as leaving a party can be a time-consuming activity, but Rich had just popped out to the shop for something that had run out, and Vince was busy in the kitchen, so I wasn’t held up, and was home just after 9. And a few cups of tea later I hit the sack. I had been looking forward to that! And I hope next year these tradition-spoiling Brits don’t plan races the morning after Guy Fawkes Night… 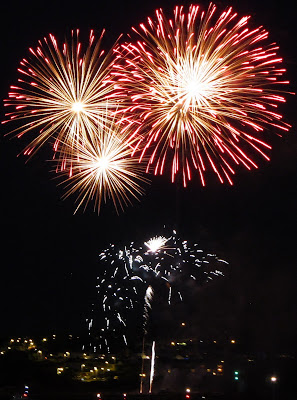