It would have been a beautiful walk! Great views over the Teign Valley, picturesque autumnal trees, a gentle November sun... but of course we didn't walk. We ran! And that complicated things.

On the Tamar Trotters website I had seen this 10 mile off-road run on the other side of Dartmoor, and it sounded rather splendid. And when it drew nearer the decision fell: Hugh and I would give it a go. So we both scrutinised the Drogo 10 website, as this race was rumoured to be quite a tough one. Three major hills! And indeed, they would not remain unnoticed.

On a hazy morning we parked at Drogo castle (hence the name), got our numbers, and went to the start. I kept an eye out for my pacer woman, of whom I knew she had registered too, but I didn't see her. And then we were off. There were hundreds of runners, and we were somewhere in the back, so we couldn't immediately start. And after an initial stretch over a broad, flat road we got to the off-road bit. And had to walk. 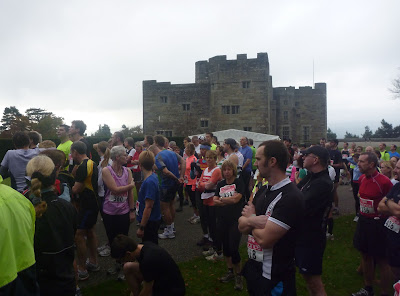 Drogo Castle itself looming over the start 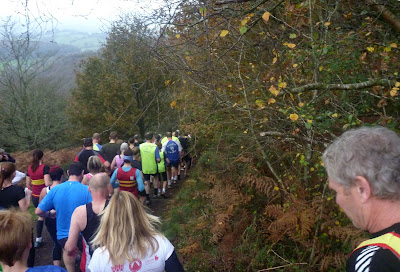 Traffic jam downhill
It was so steep there running was tricky, and we were still a crowd, so we snailed our way down in a throng. And after some more running at a pace which was mainly dictated by the people in front of us we came to a bridge. A narrow bridge. With a stile behind it. 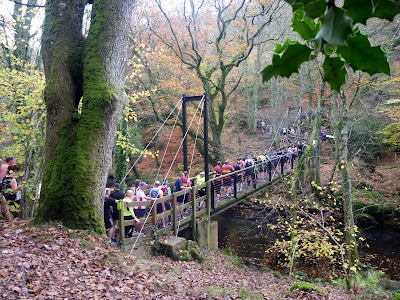 Here the runners were really standing still for minutes! Frustrating. 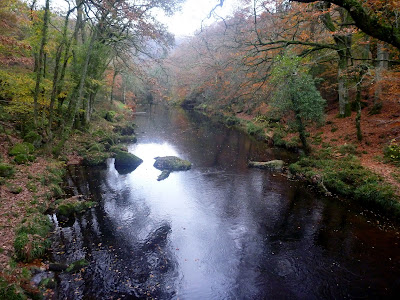 The bridge, with its queue, did provide a good opportunity for taking a picture of the Teign, along which we would run large parts of the route.
We waited in the queue for minutes. This isn't a race! This is a traffic jam. But that would change. 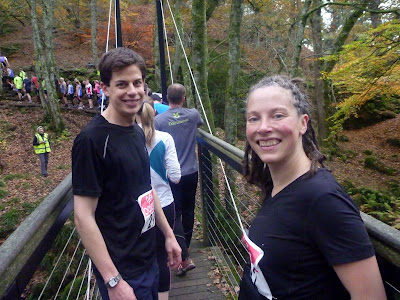 A fellow runner kindly took a picture of us. There was nothing better to do!
After the stile the actual race could begin. It started mild, with a sub-horizontal, muddy bit. Nice! But soon I would face the tougher side of the race: the first hill! Most people walked up. I even saw mr. Stubborn, aka Hugh, walk. I was even more stubborn! I ran all the way up. Marginally faster than most walking people. And slower than Hugh with his long strides, walking or not. This was the last time I'd see him until the finish...

I wheezed and panted my way up. Terrible! I got lots of encouragement from the walkers, but that doesn't give you extra breath. When I reached the top I was practically dead. And now I saw even clearer why most people walk; reaching the top they can happily start running downhill, while I was staggering down, entirely out of breath, with my calves seized up. Hmm! Maybe there is something about walking up hills...

Between hill 1 and 3 there is a stretch that does some up, down and level; I'd lost my enthusiasm for storming uphill a bit, and downhill is, off-road shoes or not, not my forte, as I am perennially afraid of hurting my knees. And on the flat bits I'm acceptably fast, but I knew I had yet another hill to conquer, so I made sure not to wear myself out.

The good news, in all this talk about being slow, is that I was enjoying the running! I had my mojo back. Maybe BECAUSE I wasn't fast. Maybe I've just been overdoing it a bit in recent runs. And the route was beautiful, and so was the weather! Enough to enjoy.

Hill no. 2 was not anywhere as serious as no. 1, so I ran up that one too, without such effort, but when I reached hill no. 3, of which I knew it was a nasty one, I abandoned my die-hard strategy and walked up. Just as everybody else in sight. And if you walk fast enough it still is demanding! But it's worth it; at the end you're rewarded with a beautiful view over the valley. 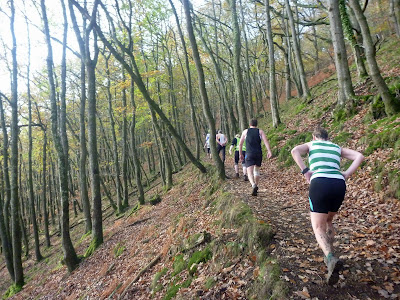 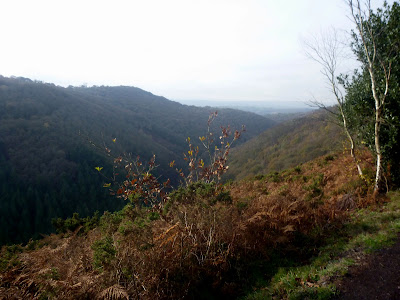 The view from the top
Once at the top you're almost at the finish. I suffered a bit from some breathing issue I have had the last weeks; I tend to lose the talent for breathing in after having run up a hill. As long as I go up I'm fine, but as soon as I try to catch my breath going down I can only properly breathe out. That's not helping! But that lasted only a few minutes this time.
So quite happy I crossed the finish, after 1.42.09. Quite some time! But I hadn't expected anything spectacular. And I found Hugh back, who had waited for me. He'd been there for 5 minutes already. So we could get our commemorative T-shirts (they had girlie fit this time! Yay for the organisation!) and go get changed. It had been a good race! And I may never be really good at it, given my knee fears, but It's enough fun to immediately want to register for another off-road race...
ps Pacer woman did run it, but she was fast! She probably started further forward in the crowd, and got to the bridge before it got too jammed there... maybe I'll spot her again at the next race!
Posted by Margot at 21:03