Model your age in Durham

“What’s your favourite part of the Holocene?” Antony baffled his guest Maarten somewhat with this question. Maarten, the king of radiocarbon age modelling, had come to Durham to teach a select company of scholars how to use his new and still in development software package Bacon for making robust age models. And during dinner he got this question from Antony. An even geekier discussion on how the Holocene is actually subdivided followed. Mind you; Maarten had already confessed to having at least once dreamt in code. This company was hard to shock with nerdiness…


I had come to Durham for precisely this course. I had a preliminary age model made in software I didn’t fully understand. There was room for improvement there! So on a Monday at 11.25 I got into the train with my geography laptop and made a file with all the radiocarbon dates, radionuclide dates, and whatever other dates I had. And I did some hair maintenance, offline blogging, newspaper reading and whatnot; by the time I rolled into Durham station it was 7PM. I was greeted by Tasha, who had turned into a lady since I had last seen her, and she took me home for pizza and tea.

The next morning started lazy; Maarten would fly in that very day, so the course didn’t start until about 11AM (time to do some online work for the teaching course!). And he started with an introduction. But after lunch he started really teaching us how to make age models with his command-based software. The speed was breathtaking! And I’m not much of a programming wonder. I’m glad Tasha is around; her mind works in a much more tidy way than mine, so she picks these things up much quicker. But I got me an age model! I was chuffed.

As soon as I had managed that feat it was time to call it a day. Several of us had to check into hotels, and after that the pub was waiting. I checked into quite a posh one; Tasha had put Maarten up in it, and such a distinguished guest deserves company. And that turned out to be a good call; Queen’s University had forgotten to pay Maarten that month, and Durham University had forgotten to pay the hotel (at least, that’s what the hotel claimed), so my credit card came in handy to secure his room. And when that was arranged we set off to the pub. And a while later we were assembled with ten scholars, raising a glass to a successful course. 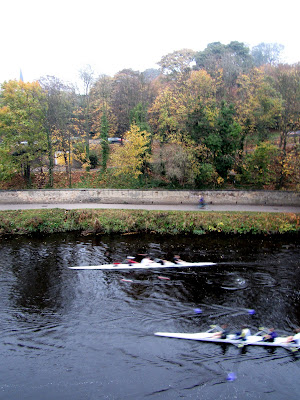 The view from the hotel
Drinks were followed by Italian food and countless many bottles of wine. And then I figured the day was done, but that was naïve; I hadn’t counted on Antony’s dangerous penchants for science-and-health-eroding nightly initiatives. And indeed, he didn’t hesitate, but steamed straight to a pub after dinner. And then another one. I wanted to keep my mind in a programming-compatible state, so I left after the first pub, and so did Maarten, who not only had had to get up early to get to Durham, but is also a young father, so he was knackered. The next day we would look fresher than some… 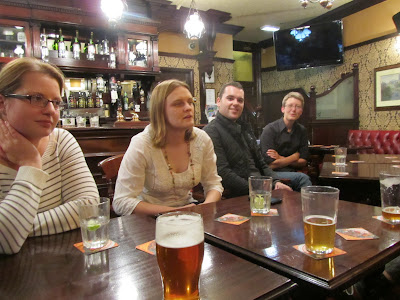 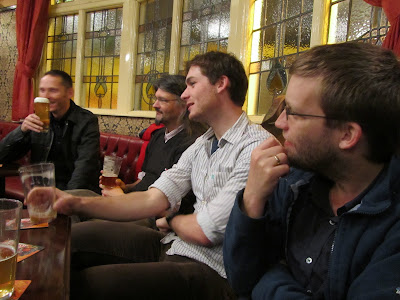 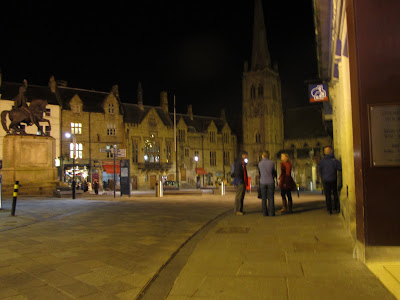 People queueing at the cash machine allowed me to take a picture of the decorative Durham square
The next day I was eager to check my mail; the next day, in the morning, I had to give a group presentation within the framework of the teaching course, and we hadn’t even decided on who would do the talking. But when that was settled we could go on age modelling. Tasha and Antony provided Maarten with the challenge of making an age model for a core with a hiatus, and plot the sea level reconstruction on that, while I struggled with forcing my age model through an exquisitely dated tephra layer. And then it was already time for lunch…


After lunch, Maarten gave a talk for all of geography, as icing on the cake. And then he had to get back to Belfast while I had to get back to Plymouth, so within half an hour the entire company had dispersed in many directions. In the train I tried to tidy up my notes; not only will I have to manage on my own with the software at home; I also will have to show Roland, who was on the other side of the globe during this course, the ropes. An interesting challenge after such a short course! But that’s science for you. Maybe tonight I’ll dream “>Bacon(‘V3A’, 2, postbomb=1)”!
Posted by Margot at 16:50