Cave rescue: how to and how not to

Let's start with the bad news. Quite some time ago I was having a post training beer with some fellow rescuers, and we ended up talking about the things that go wrong sometimes. And one guy mentioned a case of a woman who had taken a shortcut home, across some rough terrain, and in the dark she had overlooked an old mine shaft and fallen in. As she therefore failed to arrive home her daughter went to look for her, and, upon finding her, phoned the emergency services. The fire brigade showed up, and then twiddled their thumbs and got all hysterical about health and safety, so it took six hours to get the woman out, by which time her injuries and hypothermia had gotten so bad she died later in hospital.

And this morning I saw on the BBC website that that case had indeed happened exactly as he had described, and that there had been some legal kerfuffle because of it. Rightly so! But unfortunately, nothing seems to have come of that. The header was “No apology from fire service over Alison Hume's death”. So basically, the fire brigade clung to regulations of health and safety for themselves while someone’s health and safety was actually massively compromised. They should have either decided to break a few bureaucratic rules and perhaps gotten a bollocking later (but what is a bollocking if you’ve just saved someone’s life!), or just phoned mine rescue who are trained up especially for such situations. But they didn’t. The woman died and they won’t apologise. Nice, that. 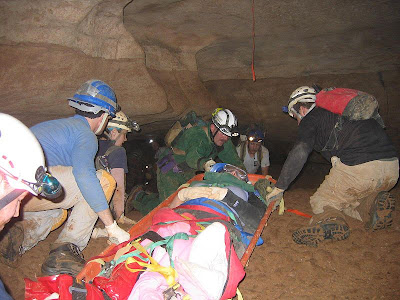 Generic picture of a cave rescue operation (this isn't us!)

Anyway; this reminded me of the rescue operation that frustratingly took place when I was in Switzerland; I heard afterwards the fire brigade had overestimated their own capacities in cave rescue once again. And this time the actual cave rescuers had been called in immediately, but they had to not only deal with the casualty, but also with the firemen that thought that not knowing the way, not having caving experience and not having the right equipment was no reason to not go underground. Luckily that did not lead to even more casualties…

But now time for the good news. I was still quite preoccupied with the sad case of the dead woman when I heard yet another case of cave rescue in the news (happened before!), on BBC radio: somewhere in Shropshire a young woman had suffered an epileptic attack underground, and had been saved by the local cave rescue team. Sometimes it works out! Let’s hope this is not just coincidence, but a trend that leads to more effective underground rescue. But let’s also hope it takes a very long time for a proper dataset to build up!


ps They've apologised after all! Very spontaneous.It only took the prime minister to get angry to achieve that...
Posted by Margot at 20:05