I’d heard of Children in Need. I’d seen the mascot, “Pudsey Bear”, depicted in various places. I’d heard of various people raising money for it in various ways. But this year, suddenly, it dawned on me what a big institution it really is here in the UK.

Every year, somewhere in November, there is one day during which the BBC is entirely taken over by some broadcasting marathon, where they have anybody remotely famous doing stuff (mainly making an arse of themselves), live on stage to raise money. In between there are clips of what the money is used for. And everybody famous participates while everybody obscure watches and donates. And outside the world of television people go to school in their pyjamas or sit in a bath tub full of baked beans or do whatever to add to this big day of fundraising.

I came across a list of past highlights. And I recognised quite some, but of most I had no idea they were CiN-related. The concert in Royal Albert Hall where Take That came together for the first time. The re-release of “a Perfect Day” performed by a whole truckload of artists. So that had been Children in Need! It started to dawn on me this was bigger than I thought. Much bigger than anything I'm aware of in the Netherlands. We have “Kinderen voor Kinderen”, but that is only big for, well, the name suggests it already, children… 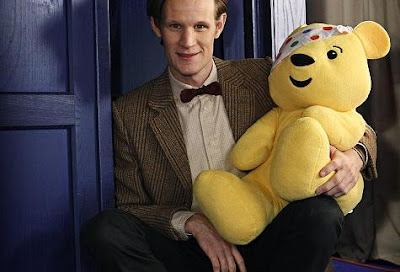 Another icon of Britishness, Dr. Who, with the Children in Need mascotte
From the "this is Jersey" website

There was loads I hadn’t heard of. But one performance got my attention. It seems that every year, the UK newsreaders do some kind of performance. And one year they had been asked (I think that’s how it works) to do a song from the “Rocky Horror Picture Show”. So they were all in various stages of drag of the very fishnetty type. But the best part of it was this: one of the more traditional-looking newsreaders seemed to have had to read the news just before that performance, and had no time to change. No problem; Rocky Horror allows one to dress in a smart shirt and tie above the waist, and then a latex miniskirt, fishnets and glittery plateau boots below the waist. And newsreaders sit behind desks, so nobody will notice. Unless, of course, some specialist is present in the studio to elaborate on some item of news. And this could easily have been staged, but is a story that it indeed happened that an unsuspecting gentleman was suddenly confronted with the unusual attire of his interviewer. And even if it was staged, and he was prepared, it made for a good scene. If he knew he was a good yet understated actor!

There’s only very bad footage of the performance on Youtube, as far as I could find, but it may be worth it. It starts after the unsuspecting gentleman has already left, but it’s still quite fun… and I was quite impressed that these generally so tremendously homophobic Brits are willing to go in drag in public as soon as it benefits unprivileged children!
Posted by Margot at 13:21