Because the town belongs to shoppers, because the town belongs to shops… I started the previous blog post with a mutilated song, and now I can’t stop. Anyway. The Sunday has traditionally been the day for communal worship, and, quite unlike many traditions of similar antiquity, this one is alive and kicking. Only a mild shift from communally worshipping God to worshipping consumption can be observed by the keen-sighted. And I myself am so busy worshipping the idols of science, caving and running, I benefit from that, as it gives me another day in which I can try to squeeze in some necessary shopping. But there’s always a price to pay! Here too.

I could now elaborate on the dangers of consumerism, but I won’t; I’m too absorbed in my idolatry. I refer now to the Plymouth 10K, which has a lot of its trajectory downtown, which means it may get in the way of shopping, even on a Sunday. So the starting time was 8:15. A randomly chosen shop along the route; Argos, was found to open at 10.30 on a Sunday, so 8:15 enough for the last runner to finish, and then for the organisation to tidy up, before they open. And I assume they are representative for that area, so I guess that was no coincidence. All very logical, but it meant I had to run at a time at which I’m not good at that.

I met with Hugh at university which we used as a cloakroom, and at the start we soon also found Pete (or perhaps he found us); the three of us were the entire delegation from geography. I also only needed seconds to find my pacer woman; there’s a lady who tends to run at the same speed as me, so I already finished right behind her on two occasions, and I figured that if I could keep her in sight I would finish with a good time. I am now a specialist at recognising her from behind after all these races! 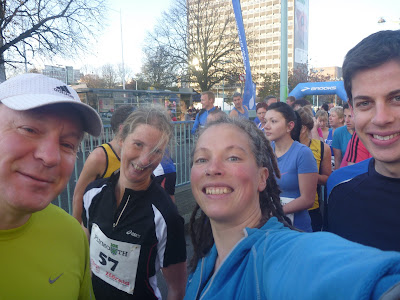 Pete, "pacer woman" Tanya, me and Hugh at the start. There my camera ran out of battery, so I didn't take any more pics!
In the faculty there had been much speculation going on regarding what times we would run. Hugh and Pete were excelling in false modesty, and I had been wallowing in pessimism too, but I figured I had a reason for this. I may still be the geographer who runs the most races, but that doesn’t necessarily make me fast. And I don't know why, but about 3 weeks ago I suddenly could only run with effort, while the many months before that I just happily skipped along. Very frustrating! Running is much more fun if you just enjoy it, and don't have to wrestle yourself through every km with leaden legs. My last effortless run was the Autumn Trail Run, and the Tavy 7 I ran two weeks later was torture. And this knowledge, plus what I’d been up to the week before the race, had crushed my confidence.

I don’t know whether people expected me to run faster than Pete, but I knew everybody figured Hugh would be the fastest. I did too… he said he’d stay with me in order to use me as a pacemaker, but I didn’t believe much of that. And indeed. After about 2 km he vanished, and only some hundreds of metres later also Pete disappeared in the crowd. On Friday we had all done a lunch run; that had been a good predictor for the race. Hugh, Pete and Will had powered off somewhere, and I had, for the first time, not been able to keep up. I ran up with Alison, and our ranks had been closed by Chris. So I didn’t expect to see them back; at least not before the finish. I plugged in my iPod and plodded on. Pacer woman was nowhere to be seen either…

Even though it was, due to earlier mentioned circumstances, a hard race, it was only 10km so quite soon I got near city centre again. I was cheered on by Sabrina, Pete’s girlfriend, and after 50 minutes I finished with relief. That was a personal best, though that doesn't mean much. My previous 10K best was that of the Saltram 10K, which went up and down ridiculous hills. The men had managed in 471/2 minutes! The fast buggers. As I had expected, Hugh had cunningly used running machine Pete as a pacemaker, and outsprinted him at the finish. So the difference was a mere second, which was much less than most would have expected, but this was the order in which I expected us to come in. 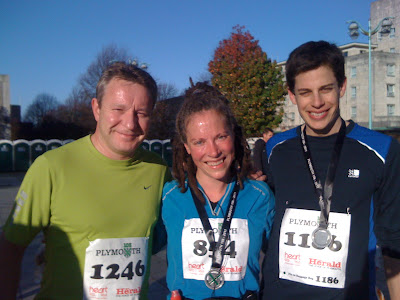 Three victorious runners at the finish! Not much changed, other than the medals, Pete ditching the hat, and Pete and me having gotten sweaty... Pic by Sabrina
It had been fun to finally race with friends, but I do hope one of these days I can get my mojo back! I think I should just keep running, and see if it helps… and maybe just look after myself. That’s never a bad idea!
Posted by Margot at 19:02