When I write this, my blog has 39 posts with the label “caving”. Only 19 with the label “science”. And of these 19, only 11 deal with the job I actually had while writing the blog post. And of these 11, 5 deal with the relatively spectacular and photogenic fieldwork. That leaves 6 for my daily job*. This clearly shows my blog does not know proportional representation. And it shouldn’t, as it would become way, way too boring if it did, but it might be worth bearing this in mind.

One thing that might not show very much on the blog is the fact that I work within a project that has three institutes as the main players: Plymouth University, Durham University, and Proudman Oceanographic Laboratories**. The Durham people feature on the blog when there’s fieldwork to be described, but the POL people remain in the dark. And that is mainly due to me rarely meeting them. We saw them for the first project meeting, on the eve of the conference in Durham, and that basically was it. But they exist, and they do beautiful work! And it was time for the second project meeting, this time hosted by POL, and therefore in Liverpool.

With a memory stick containing three powerpoint presentations I boarded the train, together with Roland. I had been reminded of how welcome that was when I had been discussing dinner plans with Tasha, through email, and it turned out she had already extensively covered that topic with Roland. Everybody has more contact with my own boss than me! Sabbaticals suck sometimes. Anyway. We boarded the train, and Roland thought it was appropriate to spend the first hour moaning about everything that is wrong at the university. Lovely!

We got to Liverpool in high spirits, after all, and only a short while later Antony and Tasha did too, and we could retire to a restaurant. As usual, we left the planning to Tasha and her iPhone. It almost always works! And Antony made sure the Plymouth delegation was almost dying of curiosity about the newest Durham results at the end of the meal. But we had to wait until the next day. 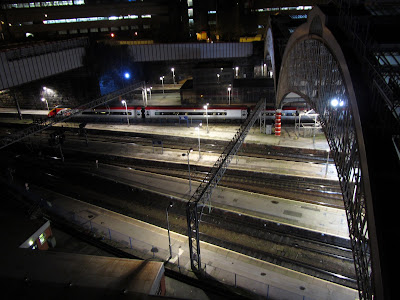 My hotel room had a view on the railway station. Cool!
Bright and early Tasha drove us to the institute, fiercely regretting she had agreed with letting the professors, and not her satnav, do the navigation, but we arrived alive and almost on time. Soon we were complete!

We then used 9.00 to 14.00 for updating one another on the state of the project. It’s coming along! And of course we had encountered some pitfalls, but we will get there. And at 14.30 one of our POL collaborators gave a seminar, which we could enjoy as the icing on the cake. And then time was already up! And in order to be at home before 22.30 (or after, for Roland), we had to abscond without further delay to the train station, and do the whole trip again, but now backwards. 12 hours in the train for a 5 hour meeting is a lot, but the meeting will keep us going through the coming 6 months, until the next one! 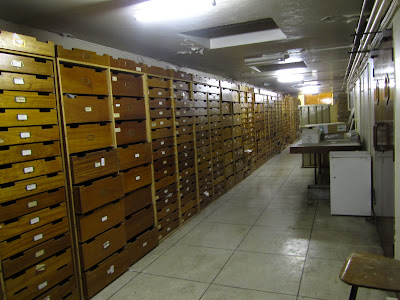 It didn't take long before I found some underground, delapidated space with lots of intriguing collections in the university building!
*: this means I haven't properly labeled all my posts, but even with that in mind it shows a certain bias towards photogenic activities, and away from day-to-day lab and office work.
**: officially renamed to the National Oceanograhy Centre, but I haven’t gotten used to that yet
Posted by Margot at 12:09