“An excellent, practical and reassuring guidebook to the most important issue on everybody’s to-do list this year. Why not buy a few and distribute them to your friends next time they wring their hands and ask “what can I do?”. It’s one of the recommendations on the back of the latest book I read: How to live a low-carbon life, by Chris Goodall. I hadn’t read that, when I bought it, but I do agree with it. I gave a copy to my sister, who put me to shame by finishing it months before me, but now I have finished it myself, and I could recommend it to anyone. 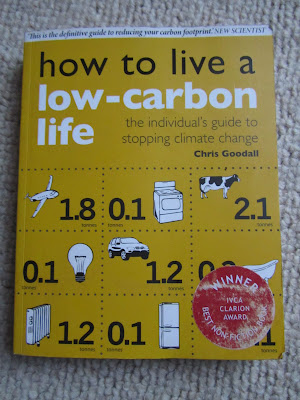 It is quite the book a leftie tree-hugger would buy, but that doesn’t make it a tree-hugger book. As far as I can tell, it’s an objective assessment of what individuals can do to keep their carbon footprint moderate. And it’s quite exhaustive! In a way it’s the smaller-scale version of George Monbiot’s excellent book “heat”, in which he deals with a similar topic but on a national scale. “Heat” is also mentioned in this book, and in equally flattering terms. Buy that too! 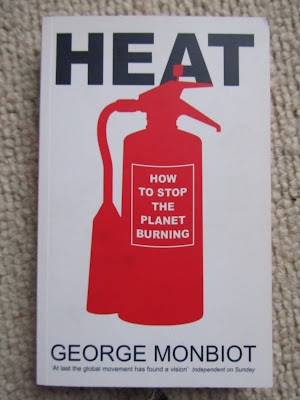 I won’t try to do honour to the level of detail of this book, but I’ll mention what struck me as particularly useful, painful, or surprising. The author is clear about one thing: if you want to keep your carbon footprint low, then don’t fly. Everything else you do will pale in comparison by air travel. And that is not only the main message of the book, but also one that hurts. About half the population of the UK flies less than once a year, and I, a leftie climate scientist, fly much, much more. “Leftie” might suggest prudence in this matter, while “scientist” dictates ruthless flying. And that makes it a bit absurd it is me who writes blog posts such as this one, but not writing them would be even worse in my view. But I'll discuss that in a separate post.

What else does this book suggest? A lot of the measures one could take involve serious tampering with one’s abode. And these chapters appealed less to me. You’re not going to add wall insulation to your rented apartment that you live in for the course of your two year contract. And beside it being a sacrifice beyond what can be expected, it might even be simply prohibited. So yes, house insulation is important, as is a high efficiency boiler, and some source of renewable energy as a wind turbine or solar panels on the roof are a splendid idea, but it is, basically, a thing for house owners.

They discuss car use as well. And that made me sigh with relief! I don’t drive very often, but my car is an old wreck that drinks like a fish, and every time I see the fuel meter run towards zero it hurts my leftie heart. But the author lights the topic of ditching an old car in favour of a newer and more efficient one from all angles, and comes to the conclusion, and I quote: “The lesson? Don’t replace your car – drive the old jalopy until it retires from the road. Take pride in the age of your car and boast your credentials even as you fill up the tank for the third time in a week.”  Excellent. And I think I’m already quite conscientious by making an effort to carpool. There is no house in Plymouth (except my own) that I’ve visited as much as Dave’s, and almost invariably this concerns me biking to his place to hitch a ride to some hole in the ground. And yes that’s partially inspired by my love for biking and my much lesser sympathy for driving, but the environmental argument does count. 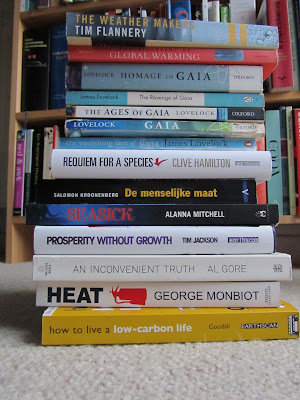 I'm starting to have quite a library of climate books. I have to admit, though, that I haven't read all of them yet: "requiem for a species" is still on the to do list, as are 3 of the 5 Gaia books. And "De menselijke maat" is the odd one out: it's written by a climate sceptic. I bought it, because I leafed through it in a book store and took about 10 seconds to find an, in my eyes, unforgivable error, that takes the whole book down. Know thy enemies! "Prosperity without growth", by the way, is reviewed here and "Seasick" here.
What surprised me was that after air travel, the next big thing was food. Food is often grown half the world away, cooked, chilled quickly, kept chilled, and then bought and reheated. That takes tonnes of carbon! It’s amazing what a difference you can make with eating locally produced foods that you buy in raw products. And every citizen cooking for themselves is maybe not so efficient, but cooking in bulk and then chilling is worse. Being a nerd and eating in the campus restaurant, though, very well might be quite responsible! And when I buy fruit and vegetables, which come with information on the country of origin, I always try to buy British, but that’s more complicated with other foodstuffs. Being vegetarian is something he is critical of; if one compensates the meat with dairy products (as I tend to do), you are not improving your CO2 output, as dairy cows burp much more methane than meat cows. Being vegan does help a lot, but it’s a radical thing to do.

So that were the most important things. What were the most remarkable ones? One thing that struck me was the discussion on very short trips by car. The author mentions they infuriate the overly environmental-conscious, and he might be right. But he calculates that walking might be worse; if you consume the calories you burnt by doing that in food, that may be worse than driving. He does mention, though, that not compensating for the extra used energy in food may not at all be detrimental to the average Brit.

Another thing that I found peculiar was that the author argues that paper often ends up in landfills, where it rots away and emits methane. And as long as that is not resolved, plastic actually is a more environmental friendly option. And that says more about the need to improve paper recycling than it does about the merits of plastic, but still.

The author may be critical, and is not buying all of the eco-babble that goes around, partially uttered by those who have something to sell, but he does point out that quite many apparent environmental-friendly measures, that actually don’t help (yet), will help get the message across to both the political and commercial world that we, the consumers and electorate, may want a change. And I think that is an important message. If politicians think they won’t get elected if they don’t enforce environmental friendly laws they will enforce them. If business folk think they can make money by putting energy-efficient, of renewable-energy, products on the market, they will. And the first thing will help inspire people to make a difference without losing all hope in the great futility of the greater scheme, and the second will make measures more accessible to the greater public. And I think that’s what we need!
Posted by Margot at 08:35

"De menselijke maat' is the only one I read, just after Salomon Kroonenberg turned out te have 'switched'; he's not a climate sceptic anymore. He's stays critical about the climate debate (his main point now is that it's better to put all energy in minimize the effects of climate change instead of trying to prevent gloval warming), but he doesn't deny glocal warming/climate change anymore.

Ah! Maybe you can be tempted to read a few more. But concerning Kroonenberg: he does have a point nowadays! If only because there is hardly any political will to mitigate the problem. And when the shit hits the fan that political will will most likely soar. And any head start we then have with keeping the results within any limits will be a blessing! But when he wrote that book he wrote nonsense; half the book hinges on the thought that we will soon enter another ice age, and global warming will only be beneficial as it will lessen the destructive effect of that glacial inception. But that can only be stated by someone who has no clue concerning glacial-interglacial cycles...