Out of the closet

I happily qualified myself as a "leftie" a few blog posts ago. But am I? I certainly look like one! But that's not what really matters. I certainly have all sorts of left-wing standpoints, but sometimes I surprise myself with thoughts that qualify more as right-wing. When the Greek took to the streets in order to protest against the governmental budget cuts I had no sympathy whatsoever. Yes, it sucks if your country goes bankrupt. Yes, it sucks if you have to bleed for it. But concluding that it sucks doesn't stop the country from being bankrupt. All carrying part of the burden will. So these people, protesting away, were effectively claiming that it should be other people, not them, who had to take the blow. Selfish, really. How many of them will have tried to actively influence the Greek policies on financial conduct? Not very many, I would guess. And letting the system go to hell as long as it doesn't directly affect you, but tearing the city down as soon as it does, that is not something I sympathise with.

In the UK the crisis is felt too. One thing that happened is that universities will get less governmental support. And they'll need to get money from somewhere, so they're forced to increase the student fees. Massively. And the students are not amused. And they made sure it did not go unnoticed they were not amused. They took to the streets of London and ran amok. The iconic picture of this event is that of a (supposed) student kicking in a window. I'm not entirely sure how a broken window will lower university fees, but that's beside the point. So the students think it should be somebody else, not them, who takes the blow of the financial situation. Are they right? 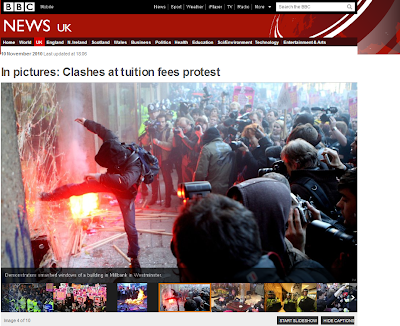 Source: BBC (evidently)
What is useful to know here is that quite some students may have voted Lib Dem. And Lib Dem promised to abolish tuition fees. And now they are trebling them. That is reason for feeling let down if you voted for them; especially if that specific promise had a hand in convincing you to vote such. But well, welcome to coalition politics: if your party doesn't get an absolute majority you know it will have to compromise. Sucks too, but again, that's how it works.
Another relevant piece of information is that these fees won't have to be paid beforehand. You pay them back after graduation. And you don't pay more per month than you can afford. And if it would so happen you never end up affording any of it the whole debt is annulled. So they protest against costs of which there is a guarantee they'll be able to pay them. And quite a lot of these kids will end up in jobs that allow them to pay back in a whiffy and lead a very comfortable life. So should they demand this will not happen, and it will be the other taxpayers who instead pay their fees? I think I can safely assume that counts as a rhetorical question...
So does that opinion make me a right wing bastard? Or a smug hypocrite who studied well before student fees went up (though, of course, UK fees had no bearing on my life whatsoever), and who was lavishly supported by daddy? Well maybe. But if so I'm not ashamed of it!
Posted by Margot at 17:56

But from you, people expect such opinions! :)

Hm, I don't consider myself a 'leftie', but I think indeed you've become very rightwing (the bastard part I can't judge of course, until I know what happens with my outdoor gear when I fall of a cliff on Snieuwhop :)). It's always dangerous to give opinion on countries you've never lived but I think there are some things that make situations a bit more complicated.

In Greece an important reason for the big protests is that the burdon isn't divided equally; small businessmen/shopowners pay (when they don't fool the system) a whole lot more taxes than the (already far better protected) people who work for the government. Also rich people have a far better chance getting away with tax fraud (or corruption). A good example are the pictures taken from villas in Athens that showed that in a neighbourhood were over 300 swimming pools, with 15 people paying the 'pooltax'. Nothing has happened with that conclusion yet. I don't know the pain is divided in the UK, but maybe this plays a role to (for example: how much do you suffer from the budget cuts? Is this more/less/in proportion with other branches?)

Besides that, I think there is a cultural dimension; you're reasoning in the very Dutch way that when there's a difference people will organize a meeting and will talk untill they have settled a compromise. Strikes or other ways of protesting are the very end of the process. I think this is not the way a lot of other countries 'work'; especially in southern Europe you see a lot of protests even before negiotiations could have started. Protests are seen more as a way of showing how powerful you are as a union/student organization (or not, when no one shows up for a protest meeting).

I think it's called "growing up". Or "gaining perspective". Either way, I can understand (and even share) your point of view. And I wouldn't call it "right wing bastard". But I am not surprised if someone did.

The person calling me a right wing bastard was me! And I think Jeroen has a point. But so does Henco. But then again, where were these people when they could have been domonstrating against corruption and tax evasion? Maybe then there just were no cameras around, but I had the distinct impression they only came out to raise their voices as soon as they were personally financially hit.

And in general I think it can sometimes be valuable and important to express your opinions by taking to the street, but then kicking in windows, throwing fire extinguishers from roofs, and the likes are not justifiable.

Of course I agree that demolishing shops or the police is not a good way of protesting. On the other hand I think (but this may be a very idealized way of thinking :)) that camera's aren't around when protesters hand over a bunch of signatures, or write a civilized letter to the minister. Nothing is so boring as people who settle an argument in a civilized way.

The other point I tried to make was that it's easy to speak of a country as a unity that has a shared debt that has to be payed back by everyone. I think that is too simple; in a lot of countries (Ireland eg) there is a feeling that banks caused a crisis, but were saved without penalty and now taxpayers have to pay the prize. And when you have a less 'institutionalized' way of protesting like the Netherlands there is a big chance that those protests become uncontrolable.

Fair points again. But in essence I think the difference in opinion is this: I think it isn't fair either that banks have been behaving like headless chickens and all taxpayers have to bleed for it, but it came this far and I see no way of fixing this without taxpayer bleeding, so I think just living with it is the best way of dealing with it... fatalism is my middle name! If I wanted to demonstrate I should have done it earlier.